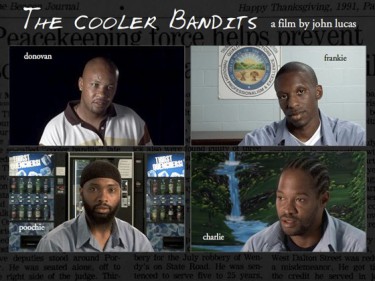 John Lucas grew up in Ohio. When Lucas decided to volunteer for the Big Brother / Big Sister program in Akron he couldn’t have known how much it would change his life, and the lives of the boys he would meet. His little brother was an eleven-year-old named Charlie. Soon after meeting Charlie he met Charlie’s cousin: Poochie. He also met a number of other kids, and started photographing all of them.

After Lucas left Ohio, he would return often to the community in Akron, saddened and angered to find the lives of the children that he had known being systematically and rapaciously destroyed by poverty. Many of them ended up incarcerated.

In 2006 Lucas decided to start filming. He focused on four youths he had known. Working with his co-director, Julie Janata, he started filming these four friends through their prison terms and back into society upon their release.

The Cooler Bandits is the film’s title as well as the crew consisting of Charlie, Donovan, Frankie, and Poochie, who were all teenagers in 1991 when they spent the better part of the year robbing restaurants. Collectively they were sentenced to 500 years despite the fact that no one was hurt. In the years since filming began, Charlie, Donovan and Poochie have all been released and are struggling with the myriad difficulties of re-entering society after decades in prison. Where can you live? Who will give you a job? How will you adjust to the social, and emotional differences from the life you knew to the one you are now dropped into? And what about Frankie? He is the only one who remains incarcerated. He is not eligible for parole until 2035. Will he spend the rest of his life in prison? How does one prepare for that? These are all questions that the film addresses through the very intimate and sustained stories of these four men.

“As a native of Akron, Ohio I was witness to the fact that these men came from environments that made the life-threatening decisions they made (for both themselves and their victims) seem reasonable, or at least commonplace,” says Lucas. “Over the years, visiting them in jail when I could, I watched boys grow into men. I watched them process realities most of us only consider theoretically.”

It is rare that one gets to see a documentary film that follows its subjects for such a long time. Hoop Dreams and the 7-Up series both did it to great effect. People are fascinating, the longer we stay with them, the more fascinating they become. Their lives are a window into the world around us, and into ourselves. This kind of prolonged contact and understanding between a director and his or her subjects brings a rare rawness to a documentary film. Over the years Lucas has been there during the complicated and bleak topography of these men’s lives: “Sadly, I have attended five funerals since beginning this film. No one has made it to 50 years of age.”

With Poochie set to start attending college, and expecting a child, and the others struggling with their own paths, there are still a few key moments that Lucas and Janata would like to capture before completion. They expect to have a finished film by early summer.

You can watch the trailer for The Cooler Bandits and learn more about the subjects and the filmmakers here.