by Michael Murie
in Cinematography, Filmmaking
on Nov 18, 2011

Studio cameras aren’t something I usually spend much time looking at, but I just sat in on a demo of Sony’s new HXC-D70 HD/SD System Camera, which has some interesting features.

The HXC-D70 only started shipping three weeks ago, and Sony considers it their budget 2/3” sensor studio camera; it sells for about $20,000. While it might have many potential audiences, it’s plain that Sony intended this for studios and corporate environments who are currently shooting SD but plan to move to HD. This camera works happily in either mode, will work with older CCU-D50 camera control units, and it supports multi-core, meaning studios don’t have to rewire to run these cameras. 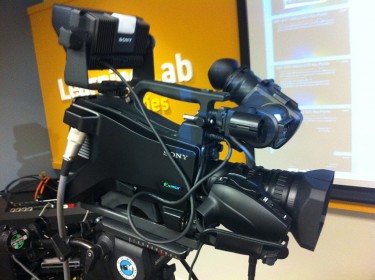 But those are just the boring details. What I found interesting about this camera are the following features, some of which are new to this camera:

Ethernet remote control
The HXCU-D70 Camera Control Unit has an Ethernet port that can be used to control the camera remotely via a LAN or Internet. According to Sony,“as long as you can ping it fast enough’ (within 120 milliseconds), you can control the camera. It should work on any LAN, and has even been tested successfully on the Internet connecting across the country. Your mileage may vary. Note that you’re only controlling the camera, this isn’t sending the video signal.

Skin-tone detail and the Zoom-Skin switch
The skin-tone detail function reduces the amount of detail for a specific hue or chroma area. Perfect for removing wrinkles!
The Zoom-Skin switch allows you to taper the amount of detail being removed as you zoom; as an example, when zoomed in the reduction could be higher, but it is removed when you zoom out.

Multi-Matrix
Allows you to choose one of 16 fixed color ranges and adjust the phase and saturation for just that color. It’s a pre-gamma adjustment.

Adaptive Matrix
The first camera to have this feature, Adaptive Matrix works well with intense lights that are over-saturating a surface. When turned on, it brings back detail and provides a more natural image. It was suggested that this function would be useful when shooting bands or shows that feature bright colored lighting.