by Michael Murie
in Cinematography, Filmmaking
on Nov 28, 2011

We’ve seen several revolutions in the world of camera design over the past ten years; HD video, solid state recording, DSLRs, and large sensor cameras, but one that is often overlooked is the arrival of the software camera.

It used to be that when a camera was released its features were set in stone, and only the arrival of a new model – or a very rare recall – saw any changes in the capabilities of the camera. That has changed as the computer-like functionality of video cameras has expanded.

As just one example, there were two amazing things about the Canon 5D Mark II. When it was released it supported video at 30 frames per second. That was amazing. But perhaps just as amazing was that a few months later a firmware update added 24 fps and 29.97 fps support. This was a surprise to even some of Canon’s local US reps, who originally didn’t believe that Canon would go back and update the firmware.

Now we’ve almost started to expect that manufacturers will release some updates and fixes during the life of a camera. 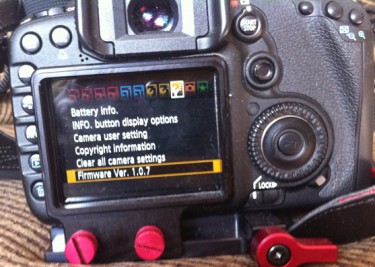 1. Manufacturers are almost regularly updating the firmware of their cameras at least once or twice after release.
In the past month alone Arri, Panasonic and Sony all announced firmware updates for some of their video cameras. Sony’s forthcoming update to their NEX-FS100 is expected to add some new functionality, including different frame rate support and support for the new A-mount to E-mount adaptor [LA-EA2]. But the update for their HXR-NX70 is also expected to improve the operation of the zoom rocker switch, which had received many complaints from users.

2. Some features are now paid upgrades.
Sony seems to be taking the lead here too, with the S-Log upgrade to the PMW-F3 costing over $3,500. A free firmware update Sony subsequently announced enhances both the existing camera, as well as the S-Log function (which you still have to pay for.) Arri has announced paid updates to the ALEXA for 120fps recording and Avid DNxHD file support.

3. End users are hacking their cameras.
There’s already been hacks for the Canon DSLRs to add manual audio control and other features using Magic Lantern, and a separate hack to the Panasonic GH2 to increase the data rate of the image being captured. As far as I know, no one has released a hack for a video camera, but it probably won’t stay that way forever.

What does this mean for the cinemtaographer?

3. Obsolescence isn’t gone forever
Cameras haven’t turned into a total software device, and manufacturers don’t seem to be on a path of indefinite yearly upgrades. Most manufacturers will continue to release new cameras every year or two, as they make improvements in sensor and camera technologies. A camera may get one or two major updates, but there’s likely to be few changes after a newer model is released, and the biggest changes are likely to happen early in the product cycle, which brings us to 4:

4. The squeaky wheel gets the most grease
Manufacturers would still rather build and sell new cameras, than spend time enhancing existing models. At the same time, the chances for the biggest enhancements are within the first six months of release. That’s when you want to let any manufacturer reps, rental houses and other camera people know of any new functionality you believe a new camera needs.