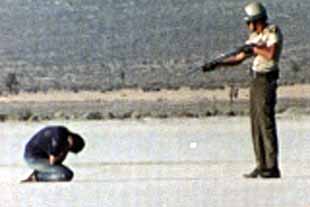 A new “Five in Focus” series launches today at FilmInFocus: five political writers or commentators discuss their five favorite films about political campaigns. Up today is a sophisticated and suprising list from Rick Perlstein, author of Nixonland: The Rise of a President and the Fracturing of America. Along with Max Ophuls’ The Earrings of Madame De is Peter Watkins’ Punishment Park.

I’ve never seen a film that more convincingly projects the sheer rage Americans felt toward one another in 1970 than Peter Watkin’s astonishing mockumentary Punishment Park. In it, a group of radicals are basically tortured to death after conviction by a kangaroo court of “Silent Majority” citizens in a remote desert; both sides were played by type-cast non-professional actors. It feels like a family dinner table argument over the Vietnam War breaking out into a shooting match. After a screening, representatives from 24 PBS stations across the country agreed they could never show a movie this intense on American TV.