Jared Flesher on Doc Filmmaking with a DSLR: Part One

by Michael Murie
in Cinematography, Filmmaking
on Dec 12, 2011

Jared Flesher is a self-taught filmmaker. He shot his first feature-length documentary, The Farmer and The Horse on a Canon consumer camcorder, shooting and editing the entire movie himself. With the success of that movie under his belt, he moved on to his second documentary, Sourlands, which he just finished shooting and hopes to complete by June of 2012. For this movie he decided to make the switch to a larger sensor camera, and chose the Panasonic GH2.

In the first part of this interview, Jared talks about why he made the movie, and his experience making the switch to shooting with a DSLR.

What’s Sourlands about?
If you were to take out a map and trace your finger from New York City to Philadelphia, that line would run through the most densely populated part of the country. More people live there than anywhere else. But right along that line there’s this one big green spot you’d see; a forest that has survived.

The story looks at how this forest survived, and why, but it also looks at the people who live near the forest, what they do to protect it. It turns out a real spirit of sustainability has caught on in this one part of New Jersey.

How did you come to be drawn to make this particular documentary?
The more I learn about the environmental issues we face, everything from global warming to what’s going on with our food supply, to what’s happening in the natural world with mass species extinction, the more I wanted to get involved with telling these stories. My first film was strictly about farming and young farmers who were not only returning to farming, they wanted to do it using draft horses, which kind of seemed like a quirky, really interesting idea.

I live in New Jersey and I have known about this forest called the Sourlands for a long time, and I wanted to tell a story that incorporated not just farming, but some of these other issues of sustainability that I was learning about, and it’s a really complex story to get into, but I could [make it understandable] if I could peg it to one spot on the map, and say “this is what’s happening right here, there’s problems all over the world but let’s just look at what’s happening right here.”

I started in February 2011, and I’ve been working on it pretty steadily for the last ten months. I just completed filming and finished an 80 minute rough cut, so now I’m in post production. I’m cleaning up the edit, doing a sound mix, color correction and also running my second Kickstarter campaign for this film. When I first started I ran a Kickstarter campaign to raise some money necessary to buy me the time I needed to make the film and invest in some equipment. Now that I have more to show people, and I know I’m close to the finish line, I’m running another Kickstarter campaign to get the film released.

Why did you decide to use a DSLR for this one?
I’d been seeing the work that other filmmakers have been doing with DSLRs, and a lot of it looks really, really, good, so I was interested in using a camera with a larger sensor. It gives you options that you just don’t have when you have a camera with a 1/3″ chip. So I decided, okay I’m going to use a DSLR.

I did have a limited budget, and I’m just getting into filmmaking, so I’m slowly accumulating equipment, but to be honest, more of the money that I’m putting into equipment is going into things that I know are going to be around for a long time, like lights, and tripods and microphones. Cameras are changing so fast that I wasn’t ready yet to put five, ten, twenty thousand dollars into a camera, and if I could do a good job with a cheaper DSLR, that sounded like a pretty good deal. 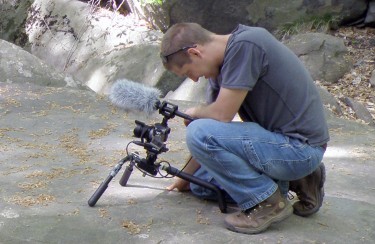 How did you decide on the GH2?
I knew I wanted to use a DSLR, and I was looking at some of the Canons and some of the Panasonics. I didn’t necessarily need a super-super shallow depth of field, which a lot of the guys who are using the Canon 5D get. There’s a certain look that goes to that, and it was a little more than I was looking for in a documentary.

I was looking at the Canon 60D, and the Panasonic GH2, and what drew me to the Panasonic was that it supposedly didn’t have the problems of over heating. Supposedly it had less moiré and rolling shutter than some of the Canons too. It doesn’t have fully manual audio, but it gives you a little more control of the audio, and the price was right. For 1,500 dollars you get the camera with the lens.

I saw what other people were doing with this camera. It looked great, and I made the purchase and started to learn how to use a camera with a larger sensor and it’s a lot different than the experience I had with The Farmer and the Horse using a consumer video camera. But you could go to film school, or you could get your own camera and learn how to use it, and for me, the idea of learning while I was actually making a film was really appealing.

Did you just use the standard kit lens with the camera?
I did use the kit lens. I used the 14 – 42mm kit lens, and then I bought the 45 – 200 mm zoom lens for some nature photography. If I could go back in time and do it over again, I would have gotten the Panasonic 14 – 140mm video optimized zoom lens. Another one that’s on my list for my next documentary is the 28mm pancake lens.

So although I made a film that I’m really proud of, and I think it’s going to look really good, and hold up really well on screen, it was still a learning process where there are absolutely some equipment decisions that I would have made differently.

You said there was a lot you had to learn. What were the biggest differences in shooting with the GH2?
The biggest difference, the reason you choose a DSLR, is because you want that shallow depth of field. But you soon realize that that comes at a price, because if you don’t have your focus right on, you’re going to get a really bad shot, something that looks unusable.

The Panasonic GH2 doesn’t have focus peaking, so you have to set your focus before your shot and then make sure you keep your character in focus. For a sit down interview it was fine, but when I was out in the field or out in the forest, I had to work with my characters and let them know that if they were five feet away from me and they moved fifteen feet away from me, I had to reset the focus. That was one of the challenges.

Were there other problems?
When people talk about DSLRs, they talk about the great results you can get, but also the limitations, and that’s exactly what I learned as I made the film. I missed having fully manual audio, I missed having the focus peaking, I missed having a headphone jack, I missed the ND filter, I missed the XLR inputs. Not having those items didn’t stop me from making the film, but I realize that it will be even easier the next time, when I move up to whatever the next camera is, whether it’s the Panasonic AF100, or the new Canon C300, which is an expensive camera but it also seems like a wonderful camera.

For me, I don’t think I would have realized just how valuable all those professional features are, until you make a film on a camera where you don’t have them.

In Part II: Shooting as a one-person crew, lighting, tripods and microphones, editing and thoughts on future equipment.