Jared Flesher on Doc Filmmaking with a DSLR: Part Two

by Michael Murie
in Cinematography, Filmmaking
on Dec 17, 2011

In part 1 of this interview, filmmaker Jared Flesher talked about his latest project, Sourlands, and making the switch to a large sensor DSLR camera. In part 2, Jared talks about how he works as a one-man crew, other equipment he uses, finishing the project, and what future camera he might like to use:

You were your own crew for this documentary?
Part of my style of filmmaking is to be a one0-man film team. There are practical reasons for that. I’m working on a fairly limited budget, so if I don’t have to pay a sound man, or someone to set up lighting or operate the camera, then obviously I can spend more time and resources just making a film.

But another reason I really like working as a one man film team is that I’m trying to make documentaries in which I’m spending hour and hours and hours with the same characters and building up a rapport. Eventually, when I’m out with one character and it’s just me and them, they start to open up and they start to forget about the camera. They start really telling you their stories in a way that – if there’s three people standing around, one person holding the microphone on a boom pole over their head, another person holding a light – you might not get.

You may not get that perfectly-lit shot, or you might not have the microphone quite as close as you could have if you’d had someone holding a boom pole, but if you’ve got the real emotion from that person I think that’s way more valuable for what I’m trying to do, which is tell engaging stories. 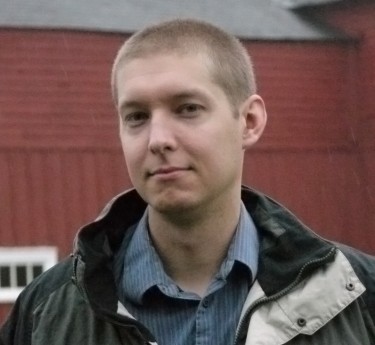 How much were you shooting handheld vs. on a rig or on a tripod?
I shot a lot of the film on a tripod, and I had a modified Spiderbrace rig that I ran around with. Towards the end, what I did more often was pick up the tripod and fold up one of the legs so it was on my shoulder. That gave me the ability to use the tripod as a shoulder brace. When I got to something that I wanted to have a steady shot, all I had to do was move the tripod leg and set the tripod down. In a room with lots of people moving around it doesn’t always work, but if you’re in the woods, its kind of cool that you can shoot handheld, and then if there’s a bird that I want to get a shot of, all I need to do is put the tripod down.

My shooting style evolved so that I’m shooting most things on a tripod, using the tripod as the shoulder brace itself.

Is there any other equipment that you bought for this project, or was different from the previous one?
I’m starting to add some lights. I’m using Cool Flo, daylight balanced fluorescent lights and a softbox which gives nice soft, full-proof lighting, and using a reflector as my fill light.

How are you recording audio?
For The Farmer and the Horse I just shot with a Sennheiser ME66 shotgun mic. I figured out that for sit-down interviews, that’s not what I want to be using, so I have the ME 64 hyper-cardioid. You get lot better results and less echo for sit down interviews.

As a one-man film team I had to figure out how to get good audio from sit-down interviews and I don’t really like using lav microphones because I always notice them on screen.

I set up a light stand with a boom pole holder. I then run a boom pole over everybodys head, and point the mic down at their mouth from two feet away, out of shot. I managed to get some pretty good audio that way.

For a sit down interview I set up a light, I set up a reflector, I set up the light stand with the boom pole holder holding the microphone, and then I stand behind the camera and conduct the interview.

What about monitoring?
It’s a big risk to shoot critical audio without headphone monitoring, but because of the camera I was using, I went with it, and not once in the dozens and dozens, and hours of interviews, did I get audio that was not useable, so it worked out for me.

It doesn’t mean that the next time I go out and shoot something it won’t happen, and then I’ll really wish I had that headphone monitor, but so far so good. 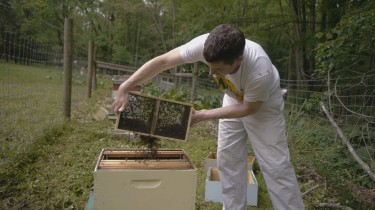 You’re in editing mode right now. Has anything changed in that part of your workflow?
I use Sony Vegas. It’s not Adobe, and it’s not Avid, and it’s not Final Cut, but I like the product. I find it very intuitive. I do all of my color correction and my sound mix right in the Sony Vegas system, and I find it to be very stable. [It doesn’t] lock up and crash. It just never happens.

I guess I’m kind of a Sony Vegas fan. That’s what I edited my first documentary on, and I’m using it again.

When do you think you’ll have the movie finished?
I’d like to have it released in June 2012. I already have a full rough cut, so I’m starting to polish it up and I’m also starting to think about film festivals. There’s a lot of work to do in the next six months, and running a Kickstarter campaign is also a full time job. I’ve sent so many emails over the last few days and I’m trying to personalize each of them to the intended audience. I’m really looking forward to getting back to editing my rough cut as it’s far more fun than being a marketer, but as you know, marketing yourself is just as important as making it.

You’ve finished all of your shooting?
I’d say I’ve shot 95%, there might be some pickup shots, One big part of the film focuses on forest ecology, so I’ll probably be out there this winter picking up some shots of animals in the snow, birds in the snow, things like that. But I have all my interviews done, and all the characters are in there, so it feels like it’s getting close.

If you were going to start your third documentary next week, would you look at a new camera, or do you think you’d continue shooting with the GH2?
Now that I’ve used a large sensor camera, I would never go back to a small sensor camera. I love the ability to get the shots with shallow depth-of-field. But if my next documentary was starting now I think I’d be ready to either make an investment in the AF100 or the Sony NEX-FS100. Or if I really wanted to make a big investment, run another Kickstarter campaign and hold out for the Canon C300.

I think that as I grow as a filmmaker, I’m kind of growing in to better cameras. Because of the learning experience and the results I got from the GH2, I’m really pleased with it. But I’m ready to have an ND filter, and I’m ready to have a headphone jack, and all those things. I did my time with a DSLR. Though I’ll hold on to my Panasonic GH2 forever. One benefit is, you could sneak a small camera like that just about anywhere and nobody will would even notice you.

Givien the way that you work, you really have to own your own camera?
Renting is just not an option for the kind of work that I’m doing. I believe that a narrative documentary film starts to feel dramatic and interesting when time passes and things change, so I’m going to be shooting for at least a year. It’s hard to rent an expensive camera for a year, and also I almost never know where I’m going to go and what certain day a character is going to call me up and say “I’m going here, you want to tag along?” so I need to own my camera.

That’s another reason I went with the Panasonic GH2 because it was in my budget and it was the camera I could own, and if I dropped the camera off a clip or into the river, I could buy another one and not feel too stressed about it. When you’re dealing with a camera and a lens that is fifteen hundred bucks, that was okay for me. If I had that new Canon C300 for twenty thousand bucks, I’d shoot a beautiful film on it, but if I dropped it off a cliff I’d be out of business. So there are benefits to choosing the cheaper camera if you’re on a limited budget like I am.

Any final thoughts?
It’s kind of incredible that you really can make a documentary yourself if you just learn the equipment and learn the software and you learn something about audio and you learn something about color. And by no means am I a master at any of these things yet, but it’s often not rocket science. Thousands of people watched my first film, and it seems like thousands of  people will watch my next film. As a story teller, that’s really gratifying.

You can see a short promo and find out more about the Sourlands project at the Kickstarter page.