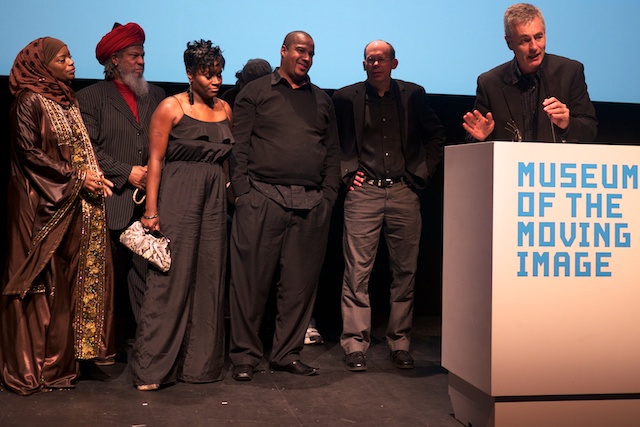 The backlash against the Academy’s recent changes to its nomination policies for documentary films  contrasted with the casual atmosphere of last night’s Cinema Eye Honors. In an intimate theater at the Museum of the Moving Image, the pillars of the documentary community gathered to celebrate the breadth and diversity of their craft. In attendance were Frederick Wiseman, Al Maysles, Steve James, Alex Gibney, Michael Moore, Joe Berlinger, Bruce Sinofsky and many more. Founder and co-host AJ Schnack spoke of the Cinema Eyes evolution prior to the awards:

“Some things about Cinema Eye are the same as they were that first time that we gathered together at the IFC Center in 2008 – that sense of community, a feeling that we are honoring our community’s values of respecting artistic craft and recognizing the entire collaborative team. What’s changed is that instead of just a couple of us making the event happen, we now rely on nearly 50 important people (from our nominations committee to our boards to our volunteers) to pull off the event, which remains a really lovingly-crafted, hand-made event. If in that time, we’ve also grown in perceived importance or stature, particularly as a place where one can recognize films that were, perhaps, unfairly excluded elsewhere, or as an event that is truly forward-looking, then that is particularly gratifying.”

Winning the Debut Award was The Arbor (dir. Clio Barnard), which explores the troubled life of late British playwright Andrea Dunbar. Pushing the boundaries of documentary, Dunbar’s story is told through professional actors who lip-synch the testimony of her actual family members.

The award for Original Music Score went to Jon Kusiak for Tabloid (dir. Errol Morris). The layers of tragedy, comedy and fairytale underlining the story of Joyce McKinney, the former Miss Wyoming whose love interest bordered along obsession, owed much to Kusiak’s genre-stretching compositions.

The award for Nonfiction Short Film went to Diary, by the late Tim Hetherington. The 20-minute collage of images and sounds offers a glimpse of the great things the filmmaker might have gone on to produce had he not perished at the hands of Gaddafi forces last year. Hetherington’s mother accepted the award on his behalf, commemorating her son’s multifaceted identity as a journalist, filmmaker, commentator and observer. As much as he was a documentarian of events, she said, “He was a documentarian of the self: the heart, the mind and the soul.” Mrs. Hetherington returned to her seat amidst a standing ovation, one of several to take place throughout the night. 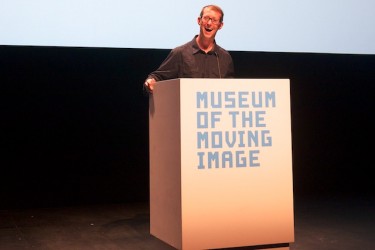 The Cinema Eye Honors created a new category this year to recognize documentaries that succeed in effecting social change—or rather, tht make you want to say “Hell Yeah!” The Hell Yeah Award went to Paradise Lost 3: Purgatory , by Joe Berlinger and Bruce Sinofsky), whose decades-long investigation of the wrongful indictment of the West Memphis Three helped bring about their release last year. Jason Baldwin, one of the three to be imprisoned for the alleged murder of three boys in Arkansas in 1993, accepted the award alongside the directors. Looking down at his statuette, he laughed to himself. “The Hell Yeah Award, right? All my life it’s been ‘No, no, no’, and now I’m up here saying ‘Hell yeah!'”

Departing from non-fiction, though not entirely, was the Filmmaker-sponsored Heterodox Award, which celebrates fiction films that “imaginatively incorporate non-fiction strategies, content and/or modes of production.” The award went to Mike Mills‘ Beginners, an autobiographical film through which are woven a delightful series of poetic mini-doc essays.

The Spotlight Award, highlighting films that didn’t receive their due exposure, went to The Tiniest Place (dir. Tatiana Huezo). The film is set in Cinquera, El Salvador, decades after the brutal civil war that left behind an estimated 80,000 dead and tens of thousands more disappeared. Survivors return to their mangled village to bury their dead and rebuild their community.

The Cinematography Award went to Hell and Back Again (dir. Danfung Dennis), about a soldier wounded in Afghanistan struggling to readjust to civilian life in North Carolina. Shot on the Canon 5D with home-made stabilization devices, the film takes the experiential storytelling that Tim Hetherington and Sebastian Junger pursued in Restrepo to the next level. Dennis addressed Mrs. Hetherington from the podium, saying of her son: “He was my inspiration, he was our prince, and he will be greatly missed.”

The Editing Award went to Senna (dir. Asif Kapadia), which, according the director, was crafted from some 15,000 hours of footage in over two-and-a-half years of editing. The film chronicles the ambitions of Brazilian Formula One racing driver, Ayrton Senna, and consists entirely of archival material.

The Production Award went to Pina (dir. Wim Wenders), an astounding 3D documentary about the life and work of experimental choreographer Pina Bausch. Wenders was inspired to make the film as early as 1985, but felt that the visceral nature of Bausch’s dances couldn’t be adequately conveyed with the existing technology. More than 25 years later, the film marks one of the most effective uses of 3D yet.

The Audience Choice Award went to Buck (Dir. Cindy Meehl), about the real-life horse whisperer Buck Brannaman. Cindy Meehl accepted the award alongside her producers, Andrea Meditch and Julie Goldman. Speaking of the all-woman crew behind the documentary, Julie Goldman said, “It takes a lot of women to make a film about a cowboy.” 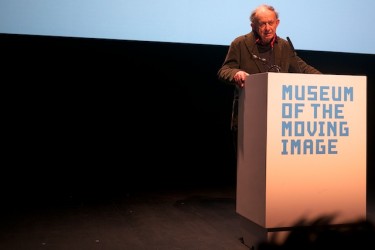 Steve James presented Frederick Wiseman with the Legacy Award for his 1967 debut Titicut Follies, whose portrait of Bridgewater Institute for the Criminally Insane inspired his decades-long study of institutions. “For [almost] 50 years,” Steve James said, “[Wiseman] has been showing us parts of the world, and America especially, in a very unvarnished, honest and complicated way. […] I think his films will so outlive him. 50 years from now, 100 years from now, people are going to be looking at these films to really understand the world that we lived in.”

Wiseman, some 82 years old, made his way to the podium to a standing ovation. “Thank you very much, Steve,” he said, “I don’t think it’s going to take very much longer for the films to outlive me.” He then expressed his gratitude for the recognition—but not before continuing his gallows humor with an anecdote about his six-hour film Near Death, which follows four terminally-ill patients as their family members consider withdrawing treatment. “I became very friendly with a guy [who worked] at the morgue,” he said. “And the last day of shooting, I wanted to thank him. I couldn’t find him in the morgue, but I finally found him in the cafeteria of the hospital. And I went up and thanked him for his help. And he shook my hand and looked me straight in the eye, and said ‘See you soon.'”

Alex Gibney, who won three awards at the inaugural Cinema Eye Honors for Taxi to the Dark Side, presented the  Direction Award to Steve James for The Interrupters. The gripping documentary about CeaseFire, a violence-intervention group comprised of former gang members, garnered rave reviews from virtually every critic who wrote about it. Yet, in perhaps the last straw of the infamous documentary shortlist snubs, the film didn’t receive a nomination. In a redemptive moment, James exclaimed, “Tonight, I don’t care about the Oscars!”

Michael Moore then took the podium to present the award for Nonfiction Feature Filmmaking. First, however, he commented on the recent changes to the Academy’s documentary branch.

“We sit here in a room tonight with Fred Wiseman, Al Maysles, and, of course, Steve James,” he said, all filmmakers who have never received a nomination. Moore, who was elected to the AMPAS Board of Governors a year-and-a-half ago, advocated a new system that would open voting to the entire documentary branch, as opposed to secret committees. “When the presenter comes out on the stage and says that the Academy has decided that the best documentary of the year is such-and-such film, it really isn’t the Academy is it? It’s less than 5% of the Academy.”

The documentary branch’s new policies also stipulate that in order for a film to qualify, it must be reviewed by either The New York Times or The Los Angeles Times. This is to help ensure that the films up for nomination are “genuinely theatrical releases,” said Moore, as opposed to television documentaries that enjoy short theatrical windows in order to qualify. “The distribution system that exists in this country now sucks,” Moore said in his typically incendiary tone. “And we need an insurgency of documentary filmmakers to do what we need to do to get these films shown in movie theaters.

He then presented the Award for Nonfiction Feature Filmmaking to, surprise surprise, The Interrupters. James rejoined the stage with his subjects, CeaseFire members Ameena Matthews and Cobe Williams among them. He concluded the evening by saying, “I agree with Michael [Moore] that we need to push constantly to get these films in front of the public more. And I think what Cinema Eye is doing is very much a part of that process to push documentaries front and center in our culture.”