by Jane Schoenbrun
in Sundance, Sundance Features
on Jan 19, 2012

Safety Not Guaranteed might be the first feature film based on an internet meme.  In 2005, a newspaper classified ad from 1997 started to spread across the web, depicted a mulleted man who claimed to be seeking, “Somebody to go back in time with me.”  The ad, which also specified, “this is not a joke” was eventually revealed to be exactly that, a fake listing published to fill out space in the paper.

But that hasn’t stopped director Colin Trevorrow from crafting his first feature film around it.  Produced by Marc Turtletaub and Peter Saraf of Big Beach (Little Miss Sunshine, Our Idiot Brother), Safety Not Guaranteed stars Mark Duplass as Kenneth, the apparent time traveller. When a cynical journalist (Parks and Recreation’s Aubrey Plaza) goes undercover to write a story about Kenneth, she finds herself connecting and relating to him in unexpected ways. 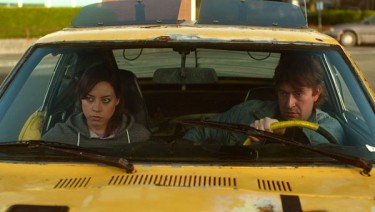 Filmmaker:   How did you come across the meme that Safety Not Guaranteed is based on? At what point did you realize that you wanted to adapt it into a feature film?

Trevorrow: My writing partner, Derek Connolly, saw the ad a few years ago. It had become a huge joke online, there were parody videos, and he wondered, “What if this is a real guy and he’s being mocked by all these people? How does it make him feel?” Derek constructed a narrative that used the ad as a jumping off point to tell a richer story. Yes, Kenneth is a shotgun-wielding backwoods scientist gearing up for time travel—but beneath that he’s a real human being who believes something is possible and won’t listen to anyone who tells him different. That’s what drew me to it.

Filmmaker:  Since your source material was very limited, how did you, Derek, and Mark Duplass go about fleshing out Kenneth’s character?

Trevorrow: Mark Duplass zeroed in on aspects of Kenneth that really brought another layer to the character and grounded the movie in reality. Behind the self-serious bravado, this guy is a very lonely individual. As an adult, he’s not quite fully formed. That comes across more and more as the story progresses, and it makes him much more relatable. But the movie is not from Kenneth’s point of view. We start with Darius (Aubrey Plaza). It’s her story. She and her colleagues go on a search for Kenneth and find something more than they expected. In a lot of ways, she’s Fay Wray and he’s King Kong. A living relic of another time, stranded on an island, waiting for love to find him.

Filmmaker:  The film has a very loose vibe to it. Was there a lot of improv on set? Did the story develop and change at all during production?

Trevorrow: We always shot the script. But Jake Johnson, Aubrey and Mark are skilled improvisers, so to not allow their characters to breathe would have been wasteful. There are several key scenes where we found something special in the moment that changed the trajectory. In fact, two of my favorite scenes were altered significantly as we discovered them on set. Another sequence came entirely out of an improvised shoot with Mark that wasn’t even intended for the movie. Those kinds of things can surprise you, and you always want to embrace them, especially when you have a Duplass Brother on hand.

Filmmaker:  Safety Not Guaranteed is a romance, but one half of the couple at the center of the story might be clinically insane. Was it a challenge to maintain that ambiguity and still make the audience root for him to get the girl?

Trevorrow:I feel like we all have so many hang-ups and oddities, the idea of someone being too insane for love is hard to accept. Everyone deserves love. Darius is a very cynical, guarded young woman, so I’d say both of them have red flags. For me, the theme of the movie is that everybody’s crazy, so find someone who’s crazy like you and march through time with them.

Filmmaker:  In the spirit of the film’s time travel theme, was there any part of the movie-making process that you wish you could go back and do over?

Trevorrow: I definitely have things I wish I could have done differently, but whatever mistakes I made resulted in this, and I like this. So I’ll let my regrets inform my choices in the future, but I don’t wish I could go back and make different choices. You do that and the whole thing could unravel.