WELCOME TO PINE HILL: THE BREAKOUT HIT OF SLAMDANCE 2012!

Or What we’re doing to get people to see our movie in Park City
“What do you want out of this film?” That’s been one of the first things people ask when starting to talk about Welcome to Pine Hill. If they really like it, they ask, “What’s your festival strategy?” Since Pine Hill was not the product of years of planning or a business model, the answer to the questions was easy: I wanted to finish the film; my festival strategy was to get into a festival. The movie came directly out of real life events and even though I may want to, I don’t have as much of a strategy for real life and what I want isn’t always in ‘reality’s’ plans.

For some viewers Welcome to Pine Hill can be a challenge to know what is real and what is not. A lot of reality spilled in to our shoot and the final film. The way the movie is shot creates that feel but so do a lot of the scenes. The opening scene -where the lead, Shannon Harper, and I fight over a dog, leading to a confrontation that brings up issues of race, class and love – was a real event, and the life described in the movie really was his life, so people have a lot of questions. A consistent confusion was whether or not the filmmaker was black. In response to that, I wrote a piece addressing that question and its implications. This wasn’t just PR. It was a way to make sure people take note of something important. In that essay and especially in the movie itself, the issues and ideas, the emotions and the people are all very real to me and I hope to the viewers of the movie. During the shoot and after we fought to make that happen. If we didn’t fight to make sure people knew what is happening and why, it would be a disservice to all the people that ended up on the screen and all the people who made the movie possible through their talent and hard work.

This was supposed to be a ‘pre-festival’ piece, part one of a three-part before/during/after set of blog posts looking at our experience going to Slamdance. Of course, things got too hectic so instead, I’m writing it on the plane to Park City. On the way to the airport, the driver, a beautiful, bored Arab Israeli Catholic (she told me this three times), looked at the GPS and said, “this thing tells me to go left.” “I wish I had that for my life,” I told her. She turned left and didn’t react. But this movie was never had a device to tell us which way to go. From the beginning the plan was to push against any movie’s inevitable fiction as much as we could. Now the movie is finished and in a festival, so the biggest reality and pressing issue for us is how to get people to see the movie in a city with two big festivals, and literally hundreds of movies, events and parties.

Since we’d been in the IFP Narrative Lab 2011 we’d heard the same refrain over and over: when you go to festival, get a publicist. Don’t go out there with just heart and charm. Really. The tireless and charming Amy Dotson wouldn’t let it go. If she wasn’t telling us to show a little leg and not pull our skirt up over our head (really, that’s what she says), she was saying “Get a Publicist.” It got boring, but they pushed it so many times, and with so many good reasons, it seemed the only thing to do. The reasoning was simple. Our micro-mini-tiny budget movie, made out of mostly sweat, tears and love (back story to each of those), that people like, would have been a waste of said sweat, tears and love if no one saw it. So we got a PR team and a lot of people we knew and began to do everything we could. Elisabeth Holm, the producer, works a full time job at kickstarter.com as the film liaison. I am a professor and curator. We are both overloaded with our day jobs (or day and night jobs) but sent more emails, Facebook updates and tweets than we ever had because we knew it mattered. We wrote emails to everyone we knew asking for ideas, advice, connections, anything really. We sent cold emails to anyone who we thought would respond to the movie and to people we knew who might know some people. We did screenings for anyone who would take the time and might be able to move mountains or molehills for us. And, as mentioned above, we also wrote things for blogs, websites, anything that would publish it. Like this piece you’re reading now.

Another thing we did was to work on our artwork. Liz reached out to her friend Isabel Yellin to make the amazing poster we have. Alex Mallis, one of the three DPs and Associate Producer reached out to his friend Nathaniel Raymond who made another poster.

In the end at least we can say that we did not go gentle into that good festival. We pushed and worked as hard as we could and a little bit more. It may be only four hours a sleep a night for the past four weeks, but we can sleep after the festival. Until the next one. 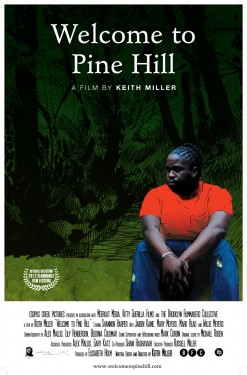