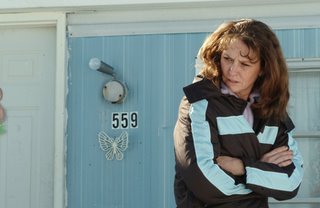 Today Courtney Hunt‘s Oscar nominated debut feature, Frozen River, is released on DVD and Blu-Ray. We here at the magazine have been big fans of the film since seeing it at Sundance last year. So we’re holding a small contest for a FREE Blu-Ray disc of the film. The first person to e-mail us the correct answer to the question below will get the disc.

(DISCLAIMER: Contest is only available for those living in the U.S.).

The answer can be found in our cover story of the film in the Summer, 2008 issue.

UPDATE: Well, that was quick. Congrats to Matthew, who won the Blu-Ray DVD with the correct answer of Rio Grande, starring John Wayne.

QUESTION: What was the film writer-director Courtney Hunt told Melissa Leo to watch in preparation for her character?

E-mail your answer to editor.filmmakermagazine AT gmail.com.

The first person to answer correctly will be notified and will be mailed the Blu-Ray. There is only 1 prize for this contest.