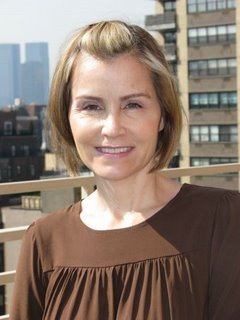 Here’s the second of our guest blogs from Sundance Lab-supported filmmaker Gayle Ferraro, who is blogging from the Skoll World Forum on Social Entrepreneurship.

The days keep getting better and I am feeling like I have known my fellow filmmakers and the Sundance folks for a long time. It is funny how that happens before you know it. We filmmakers all have code names, an affectionate shorthand, for the people we have all spoken with — the rat guy, the French guy with the cell phones, the water guys….

For the first part of the day I was a bit distracted trying to coordinate an important shoot in Queens, New York for the film while participating in the Forum. The shoot came up last minute and puts closure on a central storyline so it had to be covered.

Upon arrival at the forum’s day two I joined Cara Mertes (Director, Sundance Institute Documentary Film Program) at a press announcement for the Sundance/Skoll Stories of Change as a Grantee. I spoke a few minutes about my film on Dr. Yunus and the Grameen start-up in Queens and was then off to attend my first session: “Winning Hearts and Minds, The power of a well told story.” It was packed — no surprise given the speakers, Susan Collin Marks (Sr. VP of Search for Common Ground), Amitabha Sadangi (CEO Intl Development Enterprises- India) and Greg Barker, (Director, Silverbridge Productions). Reading their bios is impressive and the presentations hit it home with everyone.

From there I hit another two sessions in the afternoon, “Power to the People” and then “Expansion Finance For Social Impact.” For sure this sounds deadly dry, but trust me it was fascinating if you like to know who is doing what in the world and how it is working. These are committed people who are really smart and know a lot if you get into listening. The audience questions are really right-on and everyone rightly so wants publicity for their projects.

At the break I tried to hide (brain turning to mush) but I found myself with Heidi Khun (Roots of Peace) who worked with Yunus ten years ago so we have an easy connection. As we are having tea she is pulling together a half dozen women who are all working in Afghanistan doing something or other to put together a collation to meet with Obama. These are powerhouse women and they are combining forces.

The Awards Ceremony followed with the nine awardees — each receiving grants of around one million cool dollars to further their vision of a social enterprise they have brought into creation. Jeff Skoll and Sally Osberg (President and CEO, Skoll Foundation) presented the awards to the grateful recipients. Here is the thing: you may think that these guys/gals just showed up last year or the year before and hit it out of the part. No, everyone I spoke with has been hard at it for 15 years or more — except Kiva brainchild, Matt Flannery, who after three years managed to get a grant and raised $100M on the microcredit website.

Then it was a reception, dinner and the party — I had been storing up the sleep hours so that I could splurge. We started the evening by entering a packed reception hall at the University Examination Hall. We (Sundance Execs and filmmakers) took one look at the crowd and opted to head directly to the Brasserie to get a start on our drinking and conversing. The venue shifted at midnight to the third floor party at the Castle (Malmaison) where it probably went on most of the night but I don’t know as my fellow filmmakers and I backed as inconspicuously as possible into the elevator and pounced into a waiting cab to get some necessary shut-eye.