SEIDELMAN ON SMITHEREENS AND INDIE IN THE ’80S 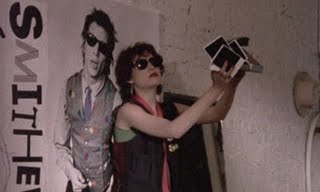 “Thinking back on it,” director Susan Seidelman writes, “there was something wonderfully naive about the way the film came together. We never thought about how (or if) the film would get distributed, or how it would be marketed. This was just a film I wanted to make that attempted to capture the spirit of a certain time and place. Fortunately, it ended up getting accepted to the Cannes Film Festival and then got picked up for distribution by New Line Cinema. But that was never something we calculated or even thought about when we first set out to make Smithereens.”

Smithereens, Seidelman’s 1982 debut feature, is perhaps more of a discovery now than when it first premiered. Looking back, it seems pretty ahead-of-the-curve with regards to its young and rebellious teen girl protagonist. It’s available through Cinetic Film Buff this week, and you can read the full text of Seidelman’s piece on the production of the film in our Web Exclusives section.