Panasonic Not So “In” to Large Sensor Cameras?

by Michael Murie
in Cinematography, Filmmaking
on Apr 17, 2012

The first day of NAB and it appears that this year Panasonic has nothing to say to indie filmmakers. Going in to the show, Canon and Sony had already pre-announced several new cameras, yet there had been nothing from Panasonic. And now the show has opened and Panasonic has only three things to talk about; the first is the AG-HPX600 2/3 CMOS P2 HD camcorder with 10-bit 4:2:2 AVC-Intra recording. At seven pounds, it’s described as the lightest professional shoulder camcorder, but it’s not really an indie filmmaker camera.

They also announced the microP2 card and microP2 card adaptor. With an SD form factor, it’s touted as a way to reduce the size and cost of P2 media. But, neither of these products are expected until Spring 2013, suggesting that we’ll be seeing them for the first time at the next NAB.

The final camera announcement from Panasonic is a firmware update for the AG-AF100 which will enable acquisition in the 1080/60p and 1080/50p HD recording formats (in new 28Mbps PS mode), and will substitute the 2.39:1 aspect ratio marking for the current 2.35 marker. The update will be available in May for $250.

Which raises the big question: what?! 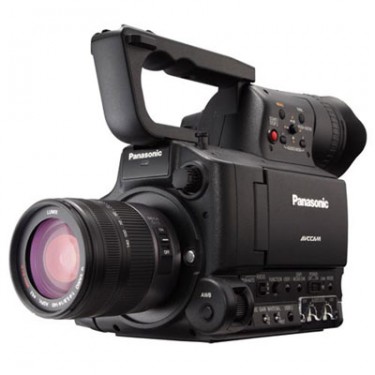 The AG-AF100 was announced two years ago, and when it appeared it was the first widely available sub-$5,000 large sensor video camera. It overcame several of the limitations of DSLRs (XLR audio inputs, built-in ND filters) and came in a tidy video camera package. Even though the image quality wasn’t really much better than what you could get from a DSLR, operationally it offered several advantages.

I know three DP’s who bought the camera when it first became available and were very happy with it. Now, two years later, all three of them have sold their AG-AF100’s, and moved on to other cameras. It’s not that they became unhappy with the camera; but newer cameras offering larger dynamic range, better low-light capabilities and better image quality have appeared. Sony has released two cameras – the NEX-FS100 and PMW-F3 – and have just announced the NEX-FS700. We’ll ignore the Sony F65, as that’s for a completely different market. Canon has also joined the party, first late last year with the C300, and now with the announcement of the C500 and the EOS-1D C.

So why no serious update or replacement for the AG-AF100? Surely Panasonic knew that Sony and Canon would continue to develop new cameras? Is it selling so well that Panasonic doesn’t see these other cameras as a threat? Or have they been unable to come up with a sensor that produces a noticeably better image? Was betting on micro 4/3rds the wrong thing to do?

One thing that can’t be ignored, the AG-AF100 remains almost the same price as the NEX-FS100 without lens, so while it is one of the cheapest large-sensor video camera options available – excluding DSLRs – it’s not significantly cheaper than the competition. There are notable pros and cons to both cameras, but it is generally acknowledged that the NEX-FS100 produces a better image in low-light.

4K is the answer?
At their presentation on Sunday, Panasonic did preview a camera that might compete with the RED’s and Canon C500’s, but details were sparse and it didn’t look like it would be ready for production or sale in the next few months.

All things considered, it doesn’t look like Panasonic is interested in competing in this market segment this year.