In this second part of an interview with Eric Austin of HeliVideo, Eric talks about camera control, future cameras, and the most amazing sequence he’s shot so far:

What camera control are you doing remotely?
We have remote record-on, off from the ground, and we can also punch-in. The lens we are currently using on the Sony is actually the kit lens, usually the 18 to 55. 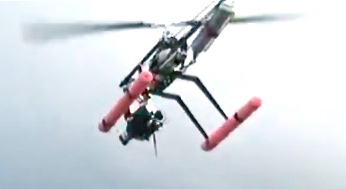 Are you using that because of the image stabilization?
Yes, in part. The gimbal is stabilized, and with the extra little stabilization in the lens it just takes out the little nicks that makes it really beautiful, but also just the balance of the lens. We can’t put a huge mass on the front of that Sony because it sticks out too far. We have other lenses, like a 16mm pancake if you need a little wider shot, but we just can’t go much out further than that.

What are you doing about exposure?
That depends on the situation. It is a little tricky sometimes because you’re on the ground, and you can be in the shade, or have clouds passing by and once you get up in the air, the cloud moves or some light changes and you’re out of exposure. That is one tricky part of this.

It was extra tricky with the Canon 7D and 5D because they are so sensitive to that, but on the Sony, a lot of times, what we can do is leave auto-exposure on. Once it gets up and it gets into its position, it’ll adjust exposure and it will pretty much hold that exposure really well for the shot. We found it to work really well, and if there is the slightest shift it’s almost invisible, which is really nice about the Sony.

You’re thinking about the NEX-FS700, but have you looked at anything else, like the Canon C300 of the RED Scarlet?
Yes. Personally, I love what RED has done but I just haven’t [looked into] that yet just because of the cost. This business is already pretty expensive, so I was just holding on jumping on the RED bandwagon.

When the C300 came out it was very, very tempting to look at too, and it fits right in our rig now, so we didn’t have to change anything. We did invest in one for the company and do offer it for people who are using one. It’s just an awesome camera. Again, the price is a little high for what we do; we fly a lot over water, and in really unbelievable situations that are just seconds from disaster. We try to keep the cost down when we can get away with it.

Excluding the camera, what’s the approximate cost of the rest of the rig?
It’s probably under $10,000, easily.

How many have you lost?
We haven’t lost any of them! It’s been over 18 months since we had an incident. We’ve done some tight stuff in rain forests and chopped through some palm trees, but haven’t lost a single one yet. 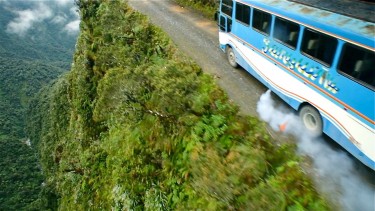 What is the most amazing shot that you’ve done so far?
I think one of the most amazing shots that we have done so far would have to have been for Hell Roads for Discovery in La Paz, Bolivia. We went to the youngest death road, which is at an altitude of 11,000 feet and it’s in the rain forest. This road used to be traveled by 300 cars a day. It’s a two-way road, but it’s a single lane and the drops on one side are over 2,000 feet, straight off. It was called the Death Road for a reason, because 200 to 300 people would die on this road every year.

I was in a van behind the lead vehicle, flying, and we passed just to the side of them and you can see there’s just 2 to 3 feet from the tire to the edge and then 2,000 feet straight down. It’s unbelievable. I didn’t even realize how shockingly far it was down because I was so concentrated on flying as we were moving, trying to get these shots. I was just looking at the rig and what we were doing. It wasn’t until we finished the sequence, turned around and suddenly I was on the passenger side of the car where I was two feet from the muddy, slippery tire path where the only way down was half a mile to the bottom. It was unbelievable, but also one of the most enchantingly beautiful places I have ever been.

This allows these shows to get shots they’ve never had before, because up there, you’re in the clouds. No matter how bad you wanted to get some aerials with a big helicopter, I just don’t think you could have done it, especially in Bolivia. We were able to get these super dynamic, high-end, toe-curling shots for a reasonable price for the production company and that’s just how we think the helicam is going to become more and more a common part of production for TV and commercials.

That’s why we are so excited about the NEX-FS700 because the 4K resolution really will open us up to the feature film market. There’s been a few feature films, but when you’re blowing up [the image] that big, 4K is going to be just unbelievable for that.

But with the NEX-FS700 it sounds like you’ll need an external recording device. Will you have enough room to include that?
Exactly, and we have the extra room, though I’m not sure how they are going to do it [let you record 4K]. Most likely we would have an external recorder, and we’d be able to mount it on top of the camera, and it will still be okay. But just that it’s coming in that form factor that we are so used to is really exciting.