Steve Collins, You Hurt My Feelings 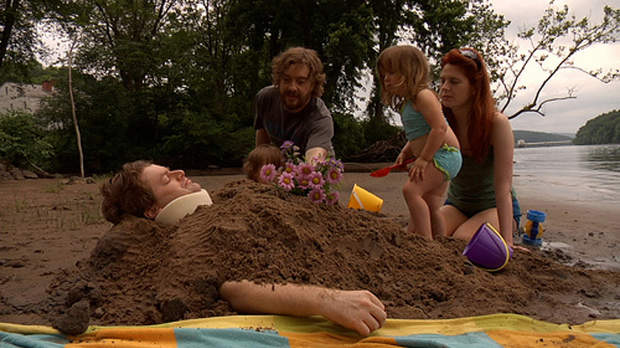 by Brandon Harris
in Director Interviews, Directors, Interviews
on May 2, 2012

Steve Collins’ You Hurt My Feelings is the story of emotionally remote and unavailable people, a trio of wounded individuals who fail to connect with one another. Though Collins’ film deals with familiar subject matter, its tale is told with such clever minimalism and discernible sweetness that it goes down rather smoothly. While the characters may not be able to express themselves emotionally, Collins and his director of photography, Jeremy Saulnier (Septien, Putty Hill), find real poetry in the changing of the New England seasons, the passage of time providing an even greater window in the the failed lives on display.

John (John Merriman), a bearded Zach Galifianakis lookalike, has to be paid to spend time caring for his two young children by his eternally angry ex-girlfriend, Courtney (Courtney Davis) while he maintains an often strange kinship with Courtney’s current beau, Macon (Macon Blair), a surly and awkward man with a penchant for drunkenness and fighting. The two men’s burgeoning loneliness leads a series of faint conflicts that further confound the emotional dynamic between the three main characters. With largely improvised dialogue, the film pushes these odd relationships to their breaking points, but remains fairly ambiguous about how we should feel, while its mise en scene keeps us so claustrophobically focused on these three individuals (and their children) that it’s a wonder we don’t become equally gripped by ennui.

You Hurt My Feelings opens at the reRun Gastropub Theater in Dumbo, Brooklyn on Friday. 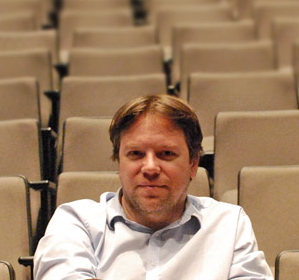 Filmmaker: Your characters are all people in various repressed emotional states. Why was that an alluring subject matter for you?

Collins: All of the stuff I’ve done is really about people who have communication problems. I think I’m drawn to that. Probably for personal reasons. I don’t suffer exactly like these people do, but I definitely relate to them. This story is an amalgam drawn from the biographies of myself, and the lead actors Macon [Blair] and Courtney, [who are] my friends as well. We’ve worked together for 10 years or so and I’ve become quite friendly with them; I’ve followed them through their trials and tribulations. After I finished my first feature, I wanted to do something smaller, mostly just because the smaller it is the quicker you can get it made. It took three or four years between fundraising and selling my first film, Gretchen. I wanted to work with what I had with me, with what I could control. I didn’t want to wait for someone to give us permission to make the movie. So I worked with my own family, my two daughters, my wife, and this group of actors I’ve been working with for years. I wrote something for them and used things that were even more personal, our own personal stories that were lightly fictionalized.

Filmmaker: The film has a DIY feel to it, but it feels very deliberate and lived in, as if you’d anticipated making a film in these spaces for some time. What is your connection to this small-town, New England setting?

Collins: I live in Connecticut now (I teach at Wesleyan University), and I tell my students all the time, “You can’t complain about I don’t have this, I don’t have that — you have to take advantage of what you do have.” The nice thing about teaching is that you’re sort of teaching yourself, reminding yourself of things as you go along. You can’t complain that you don’t have money or a big studio or a lighting truck, so I tried to take advantage of what I had around me that was unique to where I was, and that happened to be these sort of sleepy, lightly economically depressed New England river towns with four seasons. I did a lot of scouting within a 30-mile radius of where I was and put together the town that is in the film. We didn’t pay anything for any locations. It’s all trying to take advantage of what’s there.

I’ve been trying to figure out for years how to make movies cheaper. My problem has always been that I don’t really do heavy dialogue movies, but I’ve made movies where a lot of the meaning comes out of the performances, out of the dialogue, because really strong images generally cost a lot of money. On this movie, I felt like I really figured it out, that you can still make something that is very visual without spending a lot of money. You can make emotional use of the natural world. These things are free. Instead of making a movie that’s all talking, you can go the other way, where the audience has to infer everything that’s going on. The goal is to take us deeper into it.

Filmmaker: Is it tough to write films such as this one that have essentially inert characters, people who aren’t driven by discernible goals?

Collins: I’m naturally drawn to that kind of character. It isn’t hard for me. The challenge in something like this is that if you have somebody who is a sort of a sad sack character. If they can’t be active on their terms — as opposed to Bruce Willis’ terms or something — narratively it will start dragging, because you start to hate the characters. My goal was to include the four seasons of emotion in the movie, so it’s not just all despair. [That meant] that the main character has something to reach towards, and they’re all reaching toward joy even when they’re reaching from a very dark place. We wanted beauty and laughter to be represented in the world. The presence of the children often contrasts with a lot of the melancholy within the story. I don’t like movies that are all about suffering and lying in bed or something. It is a challenge when your characters are dealing with real depression. You can’t just have it turn into a passive movie where people are just lying in bed — you have to figure out how to make them active on their own terms, in the way they would be. As opposed to Bruce Willis [laughs].

Filmmaker: You worked with Jeremy Saulnier, who is a genius low-budget DP.

Collins: I love Jeremy. I met Jeremy years ago when our shorts were playing in the same shorts program at South By Southwest. He is a boyhood friend of Macon’s, so I’ve known him for a long time. I was very lucky that he was able to do the film. It was a non-paid type film and he had the flexibility in his schedule to move things around and do these dates. From the beginning, Jeremy and I were very committed to a naturalistic, available-light approach. Jeremy was able to do his version of that that still preserved the beauty and light and shadow without feeling overly polished or constructed. He’s really used to working on low budgets. We had a very limited lighting kit: a couple of kino flos,  not much else, some bounce boards and reflectors. He’s always figuring out how to handle things. We were also working in a lot of locations that weren’t completely ours in the way you would have in a bigger production. [For example], we would shoot in a restaurant where they were still serving people because we didn’t have the ability to shut down the restaurant. He’s very good at being non-intrusive, so we had to shoot in a sort of hybrid narrative-documentary style. My fear was that there was no way you could actually make [the cinematography] beautiful because we don’t have the ability to control things that much. Jeremy was committed to make it beautiful despite the lack of control we had over our locations. I think he did that and I’m forever indebted. I was okay with giving that up, because I thought that was something I would have to give up to work at this budget level.

Filmmaker: Were there particular things that were difficult to make work because the characters’ desires are often opaque? I imagine you have a significant amount of material when making a film like this that could stay or go since the material isn’t always driven by the machinations of the plot.

Collins: Well, we had an outline and everything stayed pretty close to the outline. We did do a lot of improvisation, especially with the kids, giving them a central direction and then letting them roam. The stuff with the kids is often shot in a more documentary fashion, although I would try to push them toward situations that would cause conflict without injuring them. We had lots of extra footage. The scenes with the main character were more deliberate, although often they’re doing just very simple actions, like moving into a house. When it came to any of the dialogue scenes, those were always improvised and so there were a couple situations where the movie said, “We’re going over this way,” and I shaped things in the editing room to allow that. We could also shake things up on set because we were shooting over four seasons, so I could do little rewrites before each season. One of those things was that the main character’s father was written to be sort of a sad sack character like John, but his parents are played by his actual parents and when I started working with them I realized that they had a really fun, back and forth rapport with one another. It was sort of a slower version of His Girl Friday. I realized that that worked in a different way than what I had originally written. By seeing him interact with those people you see that he yearns to have a relationship like that which is a healthy relationship, and so I sort of shifted things that way.

With the kids, there is obviously a lot on the editing room floor. We would try things that just didn’t work. The kids don’t do two takes. They do one take and then they crap their pants and I have to change their diaper. They don’t take direction, really. You just have to try to capture things and put them in situations where you think a dramatic outcome will happen. Like the moment where he’s trying to hold Lily’s hand down by the wintery river and she’s says, “You’re hurting my feelings.” I knew that my daughter doesn’t like to be babied and I knew that instructing him to keep holding her hand would cause some conflict. She did not want to hold his hand and I kept saying, “Get a hold of her.” She eventually started screaming what ended up becoming the title of the film.