A REPORT FROM THE SLAMDANCE/OPEN VIDEO COALITION FILMMAKER SUMMIT 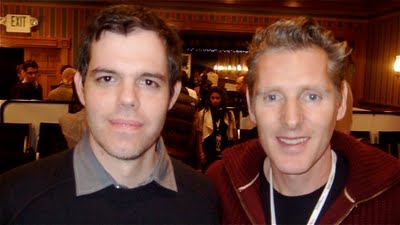 “Independent filmmakers have always been very good about making their films, but they’ve had to rely on other outside advice [with regards to distribution],” said filmmaker and Slamdance founder Paul Rachman at the Filmmaker Summit, a Saturday-morning confab here at Park City hosted by Slamdance and the Open Video Alliance. Indeed, with the collapse of traditional acquisitions-based models for independents and the flourishing of DIY strategies and new platforms, perhaps the largest growth business in independent film right now is in seminars and conferences devoted to its future. This one condensed a lot of thought from some of the key names in these pedagogical movements into a succinct three hours at the top of Main Street. “We all know the woes of the industry, but what do we want it to be in the future?” asked filmmaker and organizer Lance Weiler (pictured at left with Peter Baxter). “What needs to be changed, and how can we work together? And what should be preserved [from the current system]?”

The event started, unfortunately, with an announcement that its marquee name, Steven Soderbergh, would not be appearing via a scheduled web chat due to his filming a martial-arts pic in Ireland. First up, then, was a conversation between consultant Brian Newman, Rachman and Slamdance head Peter Baxter on the future role of film festivals in helping filmmakers distribute their film after the fest.

Baxter started off by discussing Slamdance’s deal with Microsoft in which four titles from this year’s festival are available for seven days via Microsoft on the Zune and the X-box. “Microsoft has a platform that can increase our audiences in the future,” Baxter said. “It is straightforward, and it cuts down the amount of time it takes filmmakers to deliver a film to them. It is a royalty-based deal, and there are very few costs involved. Reporting is done on a daily basis, which should be the case in this day and age. There are no third parties. Accountability and transparency is very important with this deal.” Elaborated Rachman, “The important aspect of the deal is that Microsoft will share data — email addresses, locations of viewers — with the filmmakers. Launching a film day and date is all about following up after the launch, and having that data is important.”

Answering Newman’s questions about new kinds of relationships between filmmakers and the concept of the film festival, Baxter replied, “It used to be that you needed a festival as a platform to find an agent or a deal, but now it is part of the filmmaking process; it is just the beginning.” He discussed a film, Mind of the Demon, that is part of the Microsoft deal. “It started locally, played twice in its local community and built an audience. For them, stage one was the community build. Slamdance was the next level with Microsoft deal. This non-exclusive approach [between a community premiere, Slamdance and the Microsoft deal] was essential.”

Continuing, the panelists discussed the issue of premiere-itis, in which even local and regional festivals will hesitate to show a film that has had first screenings elsewhere or which is available online. Said Rachman, “Regional festivals are going to benefit more [by showing previously shown films] because the noise created within the social networking communities will create more more value to the festivals themselves.”

About the film festival of the future, Rachman said, “Filmmakers should come to a film festival and leave completely educated the morning after they return home. The festival blues — waiting for the next festival — should be over. A filmmaker should go back home, start emailing, picking up the phone, getting in a van and going somewhere with their film. I think that that is possible now. Whatever is going to be built here, the whole community can come together and construct a multi-level system that is here to say.” He concluded by stressing old-school festival rewards, though: “The ultimate value of film festivals is in people meeting each other, whether by gathering in rooms or on the street. There is a lot for them to talk about. That human connection is the ultimate value, and that’s what’s going to happen at film festivals.”

Next up was Jamie King, director of Steal this Film and creator of the online donation system VODO. “We are finding new audiences [for films] using peer-to-peer networks [like BitTorrent] while others are saying the system isn’t working, he said. (For background on Jamie and his ventures, read this article.) “Sites like The Pirate Bay have 17 to 20 million users a day,” he said. “We put together a gang of them and asked, would you give us prominent front-page real estate for independent filmmakers, and everyone said yes. These people have a progressive bent.”

King asked the audience what they thought about a possible new model for content creation. He cited the 300,000 downloads of his film over pirate networks and said that if filmmakers can get those numbers up to one and two million, then they should be able to attract sponsorship dollars and financing for branded content. But, he admitted, “I don’t know much about making films for people with money” before asking audiences, “What do you think of that?” (My answer, as someone who has produced both indie features as well as commercials, is that the commercial business is a tightly controlled one that tends to work with people it knows — filmmakers who they are confident will burnish their brand. There are cultural and social barriers to entry to the commercial and branded-content business, barriers that are unlikely to be surmounted by huge download numbers on pirate networks.)

Discussing a recent VODO film, Lion’s Share, King did point to one useful statistic. He said the film’s downloads on the filesharing networks totalled eight terabytes. “The value of that is in the thousands of dollars,” he said, “and that bandwidth cost has been shared by our community. It points to a future when the distinction between filmmaker, producer and distributor has been broken down.” In this future, he continued, “We will need to incentivize people to promote our films.”

Next, over Skype, was Finland’s Timo Vuorensola, whose Star Wreck was an early online sensation and whose production was effectively crowdsourced. It was then distributed on the internet for free. (Revenue was generated by DVD sales.) The film led to a community at wreckamovie.com, where, he says, filmmakers can propose films to the community, asking questions like, “I have an idea for a zombie film and I need you to come up with a cool setting for this.” In addition to participating creatively, Vuorensola point out that crowdsourced communities are great marketers, helping to spread the word about the projects they are involved with.

Still, with regards to filmmakers making significant sums through donations from these communities, he sounded a note of caution. “I am a little bit skeptical about getting money from the community. You can get $100,000 from the community, but after that it gets more and more complicated and time consuming compared to [other efforts you can do] with that time.”

Next was filmmaker Khavn de la Cruz, speaking via Skype at 3:30AM his time in the Philippines, about his model of ultra-low budget filmmaking in which he makes a film (or even two) in a day. “Mike Leigh shoots for a year, and I thought maybe, let’s just fit that into a day,” he said, “That would be very cheap.” De la Cruz said locally produced films can expect to recoup $11,000 to $20,000 in the Phillipines through DVD sales. 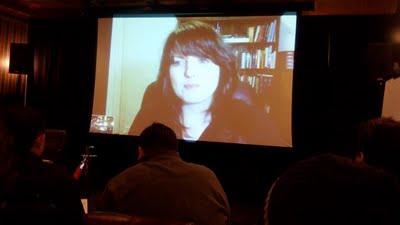 Transmedia filmmaker Christy Dena spoke next from Australia and outlined three imperatives for future-oriented storytellers. You need, she said, to think about how to develop your project across multiple platforms; you need to think about marketing across different platforms; and you need to think about different types of merchandise that can be sold that’s connected to your film. Citing familiar examples like Josh Whedon’s Serenity, she said the trend today is for the originating filmmaker to be involved in the creation of different forms of transmedia content. And here, the problem, sometimes, involves the limitations of the filmmakers’ visions. “The problem is that people have been grabbing whatever is popular, like a treasure hunt or graphic novel, which are not necessarily appropriate for every film,” she said. “[Transmedia filmmakers] should work with the art forms these filmmakers enjoy engaging with themselves.” She cited art installations, concerts and other events staged by filmmakers as illustrious as Peter Greenaway as positive examples. She also pointed out that the rise of transmedia is creating the need for transmedia producers who can manage the spread of content across these diverse platforms.

Jon Reiss, familiar to Filmmaker readers, was next with examples of his workshops, in which he counsels one-on-one with filmmakers eager to strategize forms of DIY and hybrid distribution. Using two films as examples — a bike race doc called Ride the Divide and a lowbrow comedy, Self Helpless — he asked a series of pointed questions that burrowed down into specific action steps these filmmakers could do. What are your goals as filmmakers and what do you hope to achieve from your release? Who are the audiences for your films? Which of these audiences are easily accessed? What events can be created around your films? Who might sponsor these screenings? What physical merchandise could be sold? What digital merchanise? What digital platforms can the films go out on? What should the timing of these releases be? What distribution windows can you create for yourselves? In the space of 30 minutes, Reiss and the audience filled up several sheets of large paper with great ideas that, before our eyes, became the beginnings, at least, of innovative distribution plans.

The event concluded with closing statements from Weiler, who echoed the theme of his current article in Filmmaker — that “this is the decade of the filter.” He also said, “I’d never do another project without transmedia in mind from the beginning.” The final word went to Baxter: “Transparency is key for the go-forward of the independent filmmakers. Filmmakers need to expect clear information [from their distribution partners].”