The Solar Odyssey: Taking Part in a Documentary, Part One

You never know where an interesting project can come from — a friend, a client or even from Twitter. Such was the case for Boston-based d.p. Todd Mahoney, who spent ten days documenting the progress of The Solar Odyssey Project after seeing a tweet looking for someone to sub for their regular d.p. The Solar Odyssey is an attempt to cover the waterways of “The Great Loop” in a solar-powered boat. The project is led by skipper and adventurer Jim Greer, and technologist and host Philip Hodgetts.

In part 1 of this interview, I spoke to Todd the day after he arrived in Tampa to work on the project. Part 2, is an interview conducted after the trip: 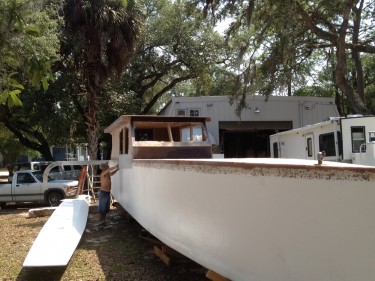 Preparations of the solar-powered boat, the ‘Ra’

What’s your background?
My background has been in local television shows and any type of shooting from events to documentaries. I’ve been doing this for at least the past 12 years.

How did you find out about this project?
I saw Philip Hodgetts’ tweet about two weeks ago. And I quickly responded to it, gave Philip my background and I got a response back within 24 hours saying, “Hey, you’re it!” I was really surprised and really happy to be part of this adventure.

What was the back and forth after he said you were it?
What I did was, I said I was interested, I gave him my background, told him some of the projects I’ve done – I have a documentary piece that’s sitting up at the Baseball Hall of Fame that I did with another gentleman, so I mentioned that as well – and I had a response back within 24 hours.

Did you know anything about the project prior to seeing the tweet?
Philip was at the Boston Creative Pro Users Group meeting two months before, and he mentioned the project and I thought, That sounds like a lot of fun — traveling the intercoastal waterway, filming it and using Final Cut Pro X and all the technology that he and his partner had built and how they were going to use it on the boat to produce a television show. That seemed intriguing, so when the opportunity came up, I jumped.

What about lenses?
We are using the standard 18-200 kit lens that came with the camera.

You’re also using a GoPro?
Yes. We have a couple of GoPros, the regular Hero HD and Hero HD 2, and we also have three Sony NEX-7’s. One will be mounted to a quadcopter provided by a company called Hoverfly, located in Orlando. 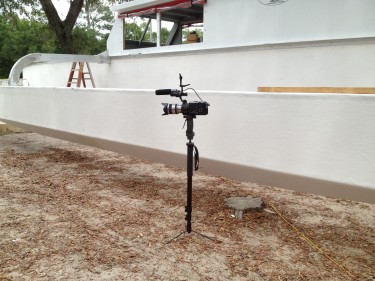 Are they sending someone to fly that?
Philip will be flying the quadcopter. He’s still in training on that, so it’s just as well the boat has been delayed.

The boat has been delayed?
Yes. There’s been a lot of rain that has slowed down construction and the other big challenge is that the solar panels have not arrived yet.

The GoPro is pretty waterproof but the other cameras aren’t. Are you doing anything about housings for those?
We’ve got rain slickers for the NEX-FS100. Right now there’s no protection available for the NEX-7, so if it’s really bad out we’ll be using the GoPros and the FS100.

What are you doing for memory on the FS100?
We’re just using SD cards. We have a 32 GB card, and then offloading daily.

And you’ll be editing on what?
On MacBook Pro’s running Final Cut X.

You said you hadn’t shot with the FS100, What did you do to prepare?
Well, what anybody would do. I went and got my hands on the camera [before coming down to Florida] and went hands on for an hour or so, and I read the manual.

Can you tell me a bit more about the boat?
The boat is a 47.5-foot boat and 28 feet wide, pontoon to pontoon. The main cabin is 6 feet across. It’s solar powered and has accommodation for six to seven people. It has a full galley, so it’s quite the boat.

How long is the trip supposed to take?
120 days once it gets underway.

Todd spent ten days filming the preparations for the voyage, and I spoke to him again once he returned – coming up in part two. Due to weather and construction delays, the Solar Odyssey Project is just completing preparations for its journey.

UPDATED 7/9: Corrected length of boat and added more info about the boat.