by Michael Murie
in Cinematography, Filmmaking
on Jul 12, 2012

The Sony NEX-FS700 has been in the hands of a lucky few for the past month, but now it’s starting to arrive at U.S. stores and dealers. Quantities are constrained, but if you ordered one when it was first announced, you should have it in your hands soon.

I got to see one in the flesh for the first time this week at Rule Boston Camera, where Sony Sales Support Engineer Tom Cubby gave a presentation and demonstration on the new cameras capabilities. I arrived late to the presentation, just as they were demoing the Super Slow-Mo feature, so I obviously didn’t miss anything important (!) 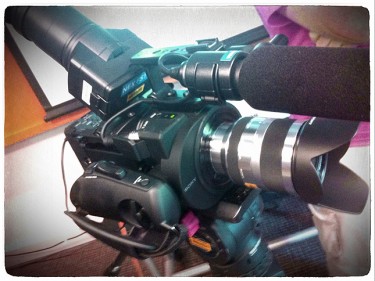 Slow-Mo Recording
If you’ve been following this camera on YouTube and Vimeo, you might think that the camera does nothing but record Slow-Mo video. It’s certainly providing a feature that’s previously been available only in very, very expensive digital cameras. The FS700 won’t replace the Phantom camera for ultra-high speed recording, but for most people it’s 240fps recording will be “good enough.”

The high-speed recording happens to a buffer, not to the SD card, which limits the length of recording, but you can trigger the recording either with a start trigger, or an end trigger. In the latter case, the recording is constantly saved to the buffer and stops when you trigger it. The amount of time that’s recorded depends upon the frame rate; at 240 fps you capture about eight seconds. Once recording stops, the video has to be transferred from the buffer to the memory card, which seems to take a long time, though it was probably less than a minute.

One person asked if you can stop the recording and record just four seconds. If you’re using the start trigger this is possible; you just hit the cancel button in the middle of the recording – provided you’re quick. You can also hit cancel in the middle of the transfer and it will stop the transfer, and what has already been written to the SD card is still playable. This works, but I’m not sure it’s a recommended way of working. It seems more like something you’d do if what you were recording went wrong, rather than to save some time and space during the recording.

I remain convinced that Super Slow-Mo is a really useful feature to have; as long as you don’t over use it!

Neutral Density Filters
When Sony rolled out the NEX-FS100, they said there wasn’t enough room to put in neutral density filters. The E-mount has a very short flange depth, providing little space to slip something between the sensor and the back of the mount. According to Sony, it was the development of the F65 and the creation of thinner ND filters that made it possible to add ND to the NEX-FS700. For me, the addition of ND filters is perhaps the best addition to the camera. It’s not sexy like Slow-Mo, but it’s a feature you’ll use every day if you’re shooting run and gun or documentary style, and it’s much better than having to deal with screw-on filters.

4K and Zoom Lenses
I was unsurprised that Sony still has no information on the 4K support, and they didn’t have any information on a zoom lens that works with the new rocker switch either. The PMW-F3 – which also arrived with a rocker switch and no controllable zoom lens – didn’t get a zoom lens for over a year after it shipped. And when it was released, the SCL-Z18X140 18-252mm lens was almost as expensive as the camera itself at $10,000. Unless Sony cuts some serious corners, it’s likely that any zoom lens for the NEX-FS700 will be similarly expensive.

Other questions
When asked whether there was any ability to control the camera remotely through wi-fi, Tom said “Not at the moment.” And then added that he didn’t think “this camera” would in the future either because there’s nothing in the hardware to support that.

During the demo of setting white balance, Tom explained that he gets a lot of calls from users having problems with setting manual white balance. “It’s tricky on these cameras if you don’t read the manual!” This is because the button labeled “White Balance” isn’t used to set manual white balance. Instead, it toggles between Auto, Saved “A”, Saved ”B”, or a set color temperature. If you want to set white balance, you have to toggle to either “A” or “B” and then press another little button next to the White Balance button – which has the same symbol – to set the white balance. “A lot of people miss that,” he added.

What about the PMW-F3?
The arrival of the FS700 makes the positioning of the PMW-F3 a little tricky. Sony says that the PMW-F3 gives you 4:4:4, S-Log, the PL mount, and more outputs. The quality of the 1080 video out of the PMW-F3 is slightly better than the FS700, but you don’t get Slow-Mo, the promise of 4K, and it costs over $5,000 more. For some users, one or more of those features will make the PMW-F3 the choice to use, but for a lot of small operators and indie shooters, the lack of high-speed frame rates, the price, and the promise of 4K – however remote – would make it hard to choose the PMW-F3 over the FS700.

One of the Sony reps did say that the PMW-F3 with high frame rates would be a great machine.

Wrapping up
I ran into Todd Mahoney at the event, who said he really liked the features of the FS700 over the FS100. It’s not all good news, though. “It’s heavier,” he said. “Some people complain about the FS100 being too light, which doesn’t make sense to me.” The NEX-FS700 is significantly heavier; almost a pound, with the body weighing 3lbs 2oz, compared to the FS100’s 2 lbs, 4oz.

While Todd likes some features of the kit lens, he finds it very hard to do smooth zooms with it. Tom suggested changing the way you work with the lens; “Don’t turn it with your wrist, move your whole arm,” he advised, though he also said that it was unlikely you’d get as smooth a zoom as you get from a video camera lens.

When I left, Todd was looking at the Alpha lenses that Sony makes to see if they are any better. 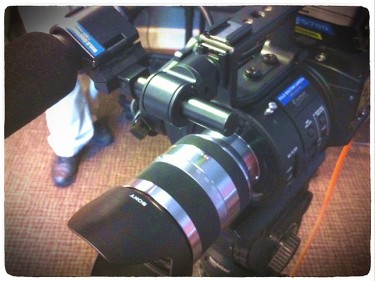 So why the NEX-FS700?
If you have an NEX-FS100, do ND filters and Slow-Mo justify upgrading to the NEX-FS700? On their own, possibly not, but the camera offers a number of other improvements over the FS100. The side-handle has been re-engineered and feels more solid and secure, the sensor is improved, there’s HD-SDI out, and they’ve even improved the ergonomics by redesigning the function buttons. And you’re getting ND filters and Slow-Mo.

Some people think the NEX-FS700 is overpriced. If you’re comparing it to the Canon 5D Mark III, it does seem expensive, but it adds a lot of functionality DSLR’s don’t offer, and in an easier to use – though larger – package. Despite that, there’s no getting past the fact that the shape of this camera isn’t much more functional for handholding than an SLR. It’s added weight will make that even more apparent. If you aren’t using the NEX-FS700 on a tripod, you’ll want to buy some kind of shoulder rig, and maybe an EVF for it.