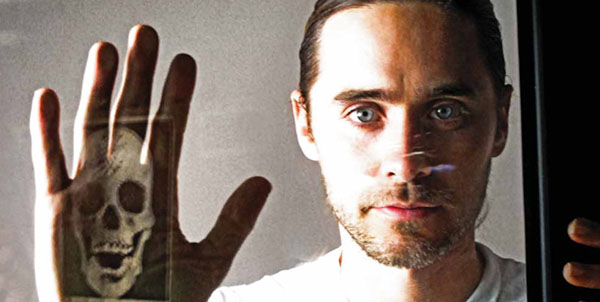 Rock “documentaries” are self-serving films that fawn over their subjects so their record companies can move more product. The typical rock doc strings together concert highlights with studio clips and innocuous musician quotes that add up to a fun, but facile movie. The L.A. band 30 Seconds To Mars turns this formula upside-down in Artifact, which enjoyed its world premiere at TIFF on Friday. Actor/musician Jared Leto’s band wants to leave their record label, EMI, when multimillionaire British tycoon Guy Hands devours the ailing company and sues 30 Seconds To Mars for $30 million. Artifact tells their battle as they struggle to record their third album and their money runs out.

Even if you know nothing about the band, Artifact is a riveting David vs. Goliath tale that exposes the corrupt music system which binds musicians to big labels like slaves to a plantation. How can a band that sells two million albums still owe its recording company hundreds of thousands of dollars? Easy. Exploitation has been in rock’s DNA since its birth 60 years ago.

Leto (working under the pseudonym of Bartholomew Cubbins) has directed several of the band’s videos and here does a fine job (with his editors) of weaving the lawsuit with interviews from rock journalists and former EMI executives. The film is largely told from Leto’s point of view, which may come off as self-serving, but remains dramatic. Leto (who starred in Requiem for a Dream) leads his drummer-brother Shannon and guitarist Tomo Milicevi into battle as they record their next album without having a label to distribute it. As EMI drags out the lawsuit to drain the band of its finances, Leto stares deeper into the abyss and abyss and his stress level rises.

“We are not anti-record company,” Leto explained to a packed house of 1,200 (mostly female) fans at the Ryerson Theatre Friday night. “We are anti-greed. We all deserve to be treated fairly.” Leto commended most record company employees for helping bands realize their dreams of making music, but “it’s those few people at the top who are keeping a system that screws the artist, and a lot of times the employees, instead of rewarding them. That’s a corporate problem, not just a record business problem.”

Leto admitted that the pressure got to the band, as witnessed in one moment where the brothers bicker. However, neither regrets fighting the lawsuit, which Shannon considered a battle between right and wrong as well as millions of dollars. “You’re in the business of making your dreams a reality….We felt like we had great reason to go to war.” In fact, they named the new album This Is War. In a perverse way, Jared Leto is “grateful” for the $30 million lawsuit: “It gave us the album of a lifetime, the tour of a lifetime, this film and a greater sense of who we are.”

The film’s title represents an antiquated system of distributing music — most of their fans grew up downloading their music on iTunes or for free. Artifact also stands for a snapshot of the lawsuit and album, explained Leto. Asked why his band didn’t start their own record label, he answered that there are others who would better at that job. “Shannon and I like to make things and share them with the world.”