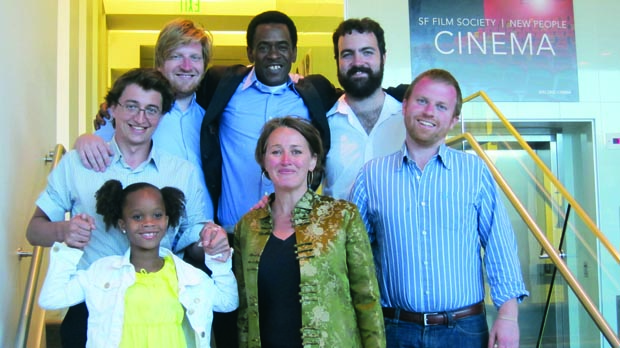 When Ted Hope moved from New York to the Bay Area in September to take over as executive director of the San Francisco Film Society, he was stepping into an organization that, with the recent success of its vibrant and generous Filmmaker360 program, had already been making a substantial impact in the independent film world.

In 2008, the late Graham Leggat, then the SFFS’s executive director, identified the need to reevaluate the organization’s ailing Film Arts Foundation, which had been in existence for more than 30 years but, despite having a robust fiscal sponsorship program, had dwindled in importance because it had almost no money for grants. Thus Filmmaker360 was born, headed by Australian producer Michele Turnure-Salleo. “Graham saw an opportunity to transform the film society from a year-round exhibitor of films to an organization that actually offered services to filmmakers to help them take their seed of an idea through to completion,” says Turnure-Salleo.

Things fell into place remarkably quickly. A partnership with the San Francisco Film Commission led to the creation of the FilmHouse program, which offers long-term office space on the San Francisco wharf to seven filmmaking teams. This was followed shortly after by a new small grants program and, most significantly, the establishment of a relationship with the Kenneth Rainin Foundation (KRF). Jennifer Rainin, the daughter of the late entrepreneur Kenneth Rainin, earmarked $3 million for narrative films that address social issues and in some way professionally or financially uplift the Bay Area. All these developments happened in the first six months of Filmmaker360 and, says Turnure-Salleo, “since then, every year there’s been incredible growth and a lot of success.”

The most obvious successes of the program to date have been the funding of such films as Maryam Keshavarz’s Circumstance and Benh Zeitlin’s Sundance and Cannes award winner Beasts of the Southern Wild, arguably the most significant American indie film of this year. Zeitlin and his New Orleans-based Court 13 collective were awarded the SFFS/KRF Filmmaking Grant (open to films with a budget of $3 million or less), which gave them funds to complete postproduction in San Francisco. “We ended spending quite a bit of time in the Bay Area doing post on Beasts of the Southern Wild, and this community proved invaluable to us finishing the film,” says Beasts producer Dan Janvey. “Filmmaker360 not only provided financial support, but they also became an integral part of our team. We would look to them for feedback on the material.”

Though Filmmaker360 has attracted much attention as a result of the substantial funds at its disposal, the program’s current success is due ot more than just money. Indeed, what seems to set Filmmaker360 apart is the way in which Turnure-Salleo has reimagined how a grant-giving body operates.

“We’re looking at building meaningful long-term relationships,” she explains. “It’s not just about a cool or unique project with an incredible story, but it’s very much about the people associated with that project, and not limited to the writer/director, but also the producing team and the d.p. and the editor.

“Whenever you meet a filmmaker or a producer, it’s an opportunity,” Turnure-Salleo continues. To see this idea in practice, one doesn’t have to look beyond the relationships that have sprung up from the body’s funding of Beasts. For example, writer/director Ray Tintori (a Court 13 mainstay and Beasts‘ SFX director) was recently given a grant to write his latest screenplay in the Bay Area, while Jonas Carpignano (a second a.d. on Beasts and also one of our “25 New Faces” of 2012) is getting help with the upcoming feature version of his award-winning short A Chjàna.

Another of this year’s “25 New Faces,” Ryan Coogler, received assistance for his recently wrapped Oakland-set drama Fruitvale, based on the real-life shooting of Oscar Grant. His project was first a participant in the new initiative Off the Page, which paid for his two lead actors, Michael B. Jordan and Melonie Diaz, to come to San Francisco to workshop the script. Recalls Turnure-Salleo, “We brought them out for four days to do script readings and meet Oscar Grant’s family and really get to know each other before everything went into full swing.” Then this summer, Fruitvale was awarded a $100,000 production grant.

“This program has the potential to fund your entire project,” says Aurora Guerrero, whose first feature, Mosquita Y Mari, came out this year and who is a “25 New Faces” alum from 2006. “In most cases, granting sources only allow you to apply once, which often leaves you struggling to see the film to completion. I think every time Filmmaker360 funds a project, they’re investing in a filmmaker they truly believe in. Filmmaker360 births film careers.”

Says Turnure-Salleo of Guerrero, “It was clear that this was someone who was approaching filmmaking with the same spirit that we were approaching supporting filmmakers. And I’m already in discussion with her about what her next project is and how we might work with her and help her in supporting it at an earlier phase.”

Turnure-Salleo explains that the way she views the role of Filmmaker360 is very much informed by her past as a creative producer. Indeed, one of the notable things about the program is its very personal, hands-on approach toward helping projects. In the case of Fruitvale, Coogler says, this meant “introductions to people who could help us secure locations, postproduction vendors and even talented crew members. Because we shot in the Bay Area, all of their closest contacts and resources were brought to our attention.” Guerrero, meanwhile, makes a special point of noting that Turnure-Salleo and some of her colleagues were present to support her at the Sundance premiere of Mosquita Y Mari, despite the devastating passing of SFFS Executive Director Bingham Ray just days earlier.

“We’re emotionally engaged with the people and the projects that we’re supporting,” says Turnure-Salleo. “It’s real for us and we get as excited about their successes as they do. We feel like we’re a part of the family that’s making the film. We’re hoping that we can contribute to the success of the film in a way that’s really meaningful as well as financially helpful or strategically helpful.”

“They are willing to take chances on films in progress by new filmmakers, and they are willing to be active partners in whatever way you need,” says Priya Giri Desai, who was awarded $25,000 by the Documentary Film Fund (given to U.S. nonfiction projects in or about to enter postproduction) for her project Match+: Love in the Time of HIV. “Even now, a year after the grant, I know I can email or call them and they will help if they can. [It] feels like they are a part of what you’re creating, and that’s rare.”

Having structured, productive dialogue is a big part of the ethos of Filmmaker360, whether that takes the form of an interaction within the framework of Project Development (formerly the SFFS’ fiscal sponsorship program) – in which filmmakers are given advice on grant proposals, rough cuts, trailers, distribution options, etc. – or simply a staffer offering counsel on any facet of the creative process with a grant recipient. Indeed, even when applicants to Filmmaker360 don’t receive grants, they get a critical appraisal of the strengths and weaknesses of their application. “I think that a lot of filmmakers’ frustration is they just don’t know why [they don’t get into programs], so they don’t know how to improve things,” says Turnure-Salleo. “They don’t know how to be more competitive because they don’t understand what the real measurements of success are.”

Fruitvale writer/director Ryan Coogler with actor Michael B. Jordan at their Off the Page session

While Filmmaker360 started out as very Bay Area-centric, it certainly hasn’t stayed that way, and Turnure-Salleo makes a point of noting that the programs are open to international filmmakers. Although there needs to be a Bay Area angle involved to justify funding a project, there has often been creativity displayed in finding that angle. For instance, on editor-turned-writer/director Lance Edmands’ upcoming feature debut Bluebird, the project got funding to bring San Francisco-based sound and visual effects crew members on board for their location shoot in Maine. “I usually say to producers and directors, it’s always better, no matter what, to reach out to us and have the conversation about whether you’re eligible,” says Turnure-Salleo.

In an attempt to be ever-more inclusive, Filmmaker360 continues to expand its programs, with initiatives like Off the Page, an Artist in Residence program (writer/director Anna Boden is the current alum) and a newly launched 4,800-square-foot FilmHouse. The latter program (offering 6- or 12-month residencies to both doc and fiction projects in any stage of production) most palpably helps create community among filmmakers, which, says alum Carlton Evans, is one of the most valuable aspects of Filmmaker360: “More than funding, relationships are what make a film. And getting to know more producers, directors, crew and financiers is invaluable to getting a film made.”

Ideas of community and cooperation among independent filmmakers has been a recent preoccupation of Ted Hope, and he says that through Filmmaker360, he wants to “develop the best practices to further engage, build communities and move the culture forward in this era of grand abundance of creative output, digital transformation and total access. Filmmaker360 is one of the greatest launchpads I or anyone could hope for. San Francisco is precisely the type of community that will recognize and embrace Filmmaker360 as the incubator and accelerator for fresh talent.”

“Ultimately, I’m just thinking, ‘What would I want, what would help me sustain my career and how can I build that into a program?’” says Turnure-Salleo. “Because I think the biggest challenge facing filmmakers is ‘How do you sustain a career?’”

For more information on eligibility, deadlines and how to apply for all Filmmaker360 programs, visit http://www.sffs.org/filmmaker360.