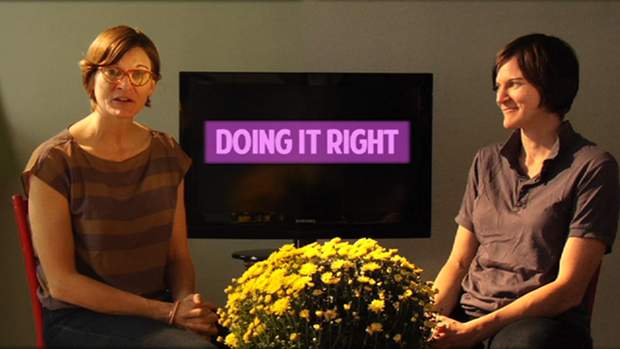 by Nick Dawson
in Directors, Filmmaking, Financing, Interviews
on Oct 29, 2012

Ingrid Jungermann was selected by Filmmaker as part of this year’s crop of “25 New Faces of Independent Film” along with her comedic cohort from The Slope, Desiree Akhavan. After chronicling the relationship between two “superficial, homophobic lesbians” in The Slope, Jungermann is striking out on her own with a new web series, F to 7th — currently in the final stages of its fundraising campaign on Kickstarter — in which the same “Ingrid” character reappears, now looking for her place in the world. Filmmaker briefly chatted with Jungermann about her upcoming show, going solo and lessons learned from The Slope.

Filmmaker: Tell us about F to 7th. Is it basically a solo spinoff of The Slope? (Will you be playing the same Ingrid character?)

Jungermann: Yes, it’s a spin-off of The Slope. I will be playing the “Ingrid” character, but I’ve gained weight for the role this time to make it more realistic.

Filmmaker: The Slope seemed very driven by personal experiences — will this show be the same?

Jungermann: Absolutely. Lately, I’ve had so many conversations with “Ingrid” and other people about how gender and sexuality play into all of our lives no matter how we identify. That’s the central theme this time around. Not in a heavy-handed way, because overkill is lame. In a subtle way, these eight new episodes are about “Ingrid” trying to figure out where she fits in. Ingrid, on the other hand, is completely comfortable with who she is.

Filmmaker: Are you being pushed in new creative directions as a result of being the solo originator of material on F to 7th?

Jungermann: Yes. It’s frightening and liberating to be the one person making decisions. It’s like being single — you don’t have to answer to anyone, but it also means you might be spending a lot of nights alone, drinking cheap wine and watching Roku. I like writing on my own because it’s a private, insular experience. I come back to me. I’m not precious about every word when we’re shooting, but I am very protective over my writing process. It’s my maze and I don’t want anyone to tell me how to get out.

Filmmaker: What things (if any!) did you learn from making The Slope that you are able to implement on F to 7th?

Jungermann: Keep it small and simple. We are shooting two episodes per day, so I write with that in mind — lighting, locations and cast are kept at a minimum. I’ve also learned to delegate and build a team around me so I have the space to be creative. The cast and crew on this show are the people who are really making it happen because it’s too much for me to write, direct, act and edit. That’s just a big narcissistic ball of wax. I’m a control freak, but I’m not a masochist.

Filmmaker: On The Slope, you had guest appearances from people like Michael Showalter. Do you have anyone fun you’re hoping to get for F to 7th?

Jungermann: Showalter is coming back. So is Ann Carr. Gaby Hoffman. Ashlie Atkinson. And we have a couple other exciting people we are reaching out to, but we don’t have confirmation yet.