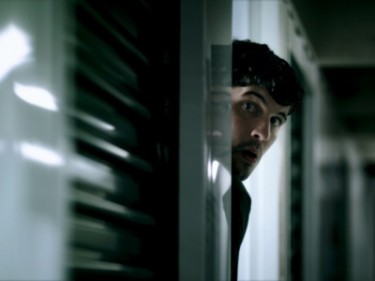 The group of filmmakers dubbed “mumblecore” is known for many things, but visual resplendency is not one of them. In fact, some of the movement’s biggest names proudly announce their disinterest in design, careful framing, and the dramatic effects of controlled lighting. From the outset, however, Aaron Katz has been an exception. Even when operating on the tiniest of budgets — as he did when shooting Quiet City for $2,000 — he has paid careful attention to the expressive potential of his characters’ surroundings. The nighttime industrial Brooklyn streets of Quiet City are not the harsh jungle of much urban storytelling but instead a poetically rendered space for an irony-free examination of chance encounters and possible romance.

If the pleasurable prettiness of Quiet City snuck up on you, that’s not the case with Katz’s latest, Cold Weather. Gorgeously shot in deliberate compositions by Andrew Reed on the RED camera, Cold Weather finds Katz working his Portland, Oregon locations for all they are worth. This time, however, it’s the story that sneaks up on you. Cold Weather is about a directionless young twentysomething, Doug (Cris Lankenau), who moves in with his sister (Trieste Kelly Dunn) after abandoning plans to become a scientist. He begs her to accompany him on day trips, reads detective novels and, finally gets a job at an ice factory. Up until this point, about 30 minutes in, Cold Weather is pleasant and diverting character study of a man grappling with that uncertain post-college, pre-adult time of life in uncommonly beautiful surroundings. Narrative intrudes when Doug meets a visiting ex-girlfriend (Robyn Rikoon), who soon goes missing. Partnering with his sister and a co-worker (Raul Castillo), Doug becomes a kind of Millenial gumshoe, tracking her down while slipping into the role of his fictional detective hero, Sherlock Holmes. In doing so he finds not only a sense of purpose but also the self-image that allows him to connect again with his sister.

Sliding from character study to offbeat comedy to the kind of casual anti-mystery made by Wayne Wang (Chan is Missing), Jim Jarmusch and, in his early career, Wim Wenders, Katz explores new rhythms and textures with a film that argues that intrigue of all sorts exists all around us — if we make a point of looking.

I spoke with Katz a few days before he left to premiere his film in Austin.

Filmmaker: The first thing that struck me when watching Cold Weather was how far away it is from Quiet City. It’s much more composed — more formal in its construction. And it more deliberately embraces genre, albeit in a playful way, with its riffs on detective fiction. Tell me how this project came together.

Katz: I really like detective fiction — Raymond Chandler, Arthur Conan Doyle. At the time I began Cold Weather, I started writing about a relationship between a brother and sister. There are not a lot of films about that relationship. There are romantic relationship movies, and parent/child movies, but brothers and sisters? Beyond You Can Count on Me there are not many. When I started writing it was going to be a story about a family, but then I was reading a book called Raffles, a collection of short stories by this British guy, E.W. Hornung, whose main character is a kind of gentleman rogue, a socialite-turned-burglar. He is sometimes referred to as the criminal version of Sherlock Holmes.  There’s even this Watson-esque character named Bunny who chronicles his adventures.  I started to think, what if [Cold Weather] still was a movie about family and relationships but these things that you associate with detective fiction would come in too, and they would be dealt with in the way real people would deal with them?

Filmmaker: Were there specific films in the detective genre you looked at for inspiration as you were preparing the movie?

Katz: Going into it, we — the core creative group of myself, Andrew Reed, Brendan and Ben — knew we wanted to shoot it a little differently. When we moved to Portland to make the film, we had all these intentions. We were going to watch a lot of late ’60s and ’70s thrillers together, like Bullit and Point Blank. We were going to watch All the President’s Men, and some Jean-Pierre Melville. And we were going to go see the Trailblazers play! But we did none of those things — it was incredible how much time [pre-production] took. But the movies we talked about were those, and I had also seen Touchez pas aus grisbi and some other French thrillers of the late ‘50s and early ‘60s just before shooting. Also, the other thing that was on our minds was Friday Night Lights. It bears no obvious relation to Cold Weather, but that show is inspiring to all of us. It deals with people and real emotions, especially the relationship between the coach and his wife, and yet it’s also a show about football that takes football seriously. We respect their approach, and some of that worked its way in. The only thing that was a one-to-one inspiration was one shot that we took from the Bank Job poster.

Filmmaker: Was the process of writing and then making the film much longer than Quiet City?

Katz: This one felt like a really long journey compared to Quiet City. The process of Quiet City was we had a script, we shot it, and four months later we were at SXSW. Quiet City cost $2,000; for Cold Weather it was a process of working with a script that required other people’s money. I wrote the first draft of the script in about a week — I tend to write a first draft very quickly. It was June of 2008. Then I showed the script to [producers] Brendan [McFadden] and Ben [Stambler]. We all went to school together in North Carolina. They got excited about it, and then it took some doing to make [the script] work. For the first time I wrote all the different things that happened on note cards and rearranged things to make the [family story] and the mystery work together. We wanted to take the human and the genre stories and treat them both with equal effect. It is easy to shortchange one of them when film has a foot in two worlds.

Filmmaker: How did you get the financing for the movie?

Katz: The other two producers who were integral to the creative and day-to-day jobs were Jay Van Hoy and Lars Knudsen. They were excited about the movie we wanted to make and found the money, private investors, and made it happen. Without them the movie wouldn’t exist. They did a great job.

Filmmaker: Like Quiet City, Cold Weather is very much attuned to the atmospheres and rhythms of its location, which is in this case Portland. Did you write the script to take place in Portland, and why set it there?

Katz: I’m from Portland. I love Portland, and I miss it all the time.  I wanted to make a movie there that captured what it feels like to live in Portland. My first movie, Dance Party USA, is shot in Portland, but you don’t feel the city in the same way. A lot of times in films Portland can be a stand-in for somewhere else, but with Cold Weather I wanted to make Portland an important character in the movie, although it’s almost a cliché to say that.  I wanted to make a movie that felt like Portland. We tried to capture the color palette — we spent a lot of time shooting and in color correction getting the colors right. The greens and earth tones are so intense there.

Filmmaker: What was it like going from the micro-budget of Quiet City to a film where you had a real budget?

Katz: My two favorite things about having more money were being able to pay people and to get the equipment that was right for the job. No one on Quiet City got paid. It was nice to work with a lot of the same people again and compensate them this time. And it was great to get a dolly and track. We shot on the RED, which was ideal for this project, and we got a lens package we were really excited about. But I was reminded that no matter how much money you have, you are always fighting against budget and time. There are a couple of zooms for the movie, but we could only afford to rent a great lens for two days. So we scheduled the film to do all of those zooms in those two days.

Filmmaker: I always like to ask filmmakers who are actually making films today what they think about having made them at this particular moment in history, when so many people are pondering the collapse of the “indie model.” Are you thinking about things like distribution strategies, different modes of delivery, etc. now that you are readying your film for its premiere? What does it mean to you to have made a film at this particular moment in time? And what are your expectations for it?

Katz: I’m really proud to have made a film at this time, when it is difficult, and I’m grateful to Jay and Lars for making that happen. It’s hard to say what my expectations are. I hope that the film can reach the greatest amount of people. And the theatrical experience is important to me. I like movies and I like going to movies. I prefer that — for me, having a positive theatrical experience highlights a film’s best qualities. But I think the first responsibility of a director is to make a good movie, and that goes for everyone in the core creative group of people. There’s a lot to be said for new media and new ways of connecting to audiences, but sometimes I think there is an overemphasis on Twitter and blogs and websites where people can request movies. They are great tools, but sometimes they overshadow the film themselves. The best thing, I think, is to make a film you feel proud of and then find an audience. But I’m for anything that can get people to see a movie. It’s when [these tools] become the dominant things, it sometimes feels they are not in service of the movies.