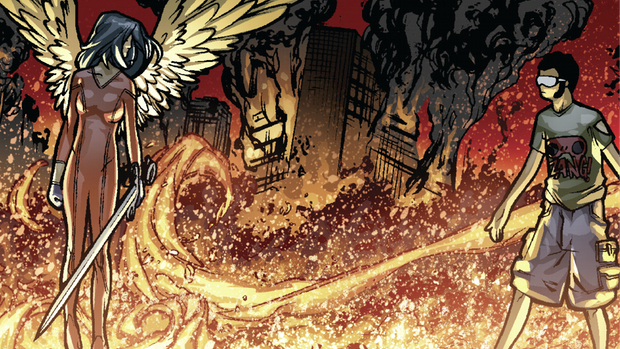 by Scott Macaulay
in Filmmaking, Transmedia
on Dec 4, 2012

Filmmaker Greg Pak (Robot Stories) has released his graphic novel Vision Machine as an iPad app and, in the process, is pointing the way towards new storytelling formats and new production and distribution partnerships. Set in the year 2061, Vision Machine is a dystopian thriller revolving around augmented reality technology not unlike Google Glass. Touching on issues like privacy and digital rights, Vision Machine was funded by the Ford Foundation as an awareness tool, and after it was completed Pak teamed up with ITVS to reimagine it as an iPad app. After learning about Vision Machine from producer Karin Chien, I wanted to learn more, so she arranged this conversation between ITVS’s Senior Programming Manager Karim Ahmad and Pak.

Karim Ahmad: So what is Vision Machine all about? What’s the story at the center of this transmedia project?

Greg Pak: In the near future, a trio of filmmaker friends grapple with revolutionary change when Sprout Computers releases the most visionary piece of personal technology ever created — the iEye, a pair of glasses that let you instantly record, edit, add special effects to, and share anything you can see or imagine. And then something goes terribly wrong…

The original graphic novel was funded by the Ford Foundation to help independent media makers imagine the social, political, and technological changes coming over the next few decades. This stuff is all coming to the real world, sooner than we might imagine. As an indie filmmaker myself, I was thrilled by the chance to explore these questions — and both incredibly excited and a little freaked out by the story that resulted.

Ahmad: Hmm… sounds familiar. Does this have anything to do with a certain piece of technology currently in development at Google?

Pak: Ha! We actually released the original graphic novel a few months before I ever heard of the Google Glass project. But yes, before you buy your Google Glass and click the user agreement forms, I highly recommend you read Vision Machine.

Ahmad: Sorry, I had to ask. It was just so weird and serendipitous that Google was developing an iEye-esque device at the same time as we had this app in development. Which reminds me – we should back up and talk a little about what this project is. Especially since there are a few different components to the Vision Machine story universe in various stages of completion/production. So to be clear – the story began as a comic book in print. Then we at ITVS supported you to develop it into an interactive digital comic book for the iPad – complete with all kinds of features not present in any other digital comic on the market. What was your interest in producing a digital comic?

I’ve been hugely interested in the potential of tablet computers to revolutionize the comics industry — primarily by providing another venue for sales to a mass audience. But tablets also provide a whole new slew of creative possibilities, of merging multimedia elements and interactivity with the comics experience, which was incredibly attractive to me as a filmmaker. Making an iPad app version of Vision Machine let me experiment and see how this kind of hybrid project could work.

Ahmad: Right. I can speak for ITVS in saying that we’re always looking for ways to innovate in the media space. Our bread and butter is documentary work, but we invest a lot of resources into developing interactive and transmedia work with a social conscience. This project was perfect for that. It was like a pre-packaged FUTURESTATES episode, just waiting for us to support further, and a great opportunity to bring new audiences to public media with something edgier than the norm.

There’s just so much innovation happening right now in the world of digital comics in general, it’s really exciting. They’re becoming their own medium – from Comixology’s guided view to keyframing individual elements to full-on animation. Comics are becoming more cinematic.

Pak: You bet. I’ll never stop loving traditional comics, but I’m a big admirer of what a bunch of folks have done with digital comics for the iPad. The Tall Chair folks did an amazing job with Operation Ajax and the Madefire comics app is gorgeous. I also love the Marvel Infinite comics — just fantastic moment-by-moment storytelling, with each swipe bringing in a new, transformative element at a pace you control.

Ahmad: But what I love about the Vision Machine app is that it’s really testing the limits of what is usually considered “acceptable” functionality for a digital comic. Like the fact that you include a complete voice and music soundtrack!

Pak: Yes! That was key for me. Many digital comics have musical scores, but we might actually be the first out of the gate with a full voice soundtrack.

We also wanted to include some really substantial extras and a social media interactive element. So throughout the story, there are “IRL” buttons that you can tap to bring up videos of real world luminaries (including internet superstar Jonathan Coulton) talking about the ramifications of the story’s themes and ideas. And you can enable a Twitter stream that shows you tweets that use the #visionmachine hashtag. We’re planning to use that Twitter stream to do virtual events, like panels or Q&As, that you can follow live in the app.

Ahmad: The other thing I love about this kind of project is that it has really interesting implications for the indie film world. Using the iPad as a direct-to-fan distribution device is a really intriguing concept, particularly in light of the ever-tightening bottleneck of traditional film distribution.

Pak: Sure. I won’t pretend “Vision Machine” represents an immediate solution to any of those problems — it was funded by ITVS and is being given away for free, so it’s not a business model that’s applicable for many projects. But maybe it can help point the way for future productions. Millions of people spending huge amounts of money on apps every day. And the medium and technology are ripe for great storytelling. It’s just a matter of time before we put all the pieces together.

Ahmad: I have to say, this is very different from the work you do for Marvel Comics – and I say that as a big fan of superhero comics. What motivated you to tell this story, and what were you hoping to explore?

Pak: The great Orlando Bagwell of the Ford Foundation originally started me on this road. Orlando and I have known each other for a while, and I think he figured my experiences as an indie filmmaker, a sci fi freak, a tech/internet/new media junkie, and a comic book writer made me the right person for this particular job.

As an independent writer and filmmaker, I’m hugely interested in the debate around copyright, trademark, and fair use. And as a human being in the 21st Century, I’m obsessed with both the incredible, creative potential of digital technology and very real and scary questions of privacy and surveillance. So “Vision Machine” gave me an amazing chance to explore all of those questions through a sci fi thriller graphic novel. I’ve always loved projects that explore real world questions through big, fun genre hijinks and real human drama.  It’s been a total blast every step of the way.

Ahmad: What’s next for Vision Machine?

Pak: I definitely have some huge Vision Machine-related projects in mind — one of looks likely to happen much sooner than later. Follow me on Twitter for all the deets as they become available — and follow that #visionmachine hashtag!