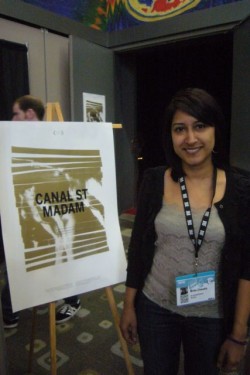 Mridu Chandra at her SXSW premiere

So I’ve been a little out of touch, I know. It’s taken some time to absorb what’s been going on since we premiered at the G-Tech 500 seat theater in the Austin Convention Center on Monday afternoon. Everything has been happening so fast.

Jeanette Maier, the subject of our film, seemed pretty calm as we all had our photos taken in front of the step-and-repeat (the yellow SXSW logo wall) and there was a huge lineup before anyone got in. I realized this just after I sent a message to two colleagues who I’d been emailing with (but had never met) saying I thought they’d have no trouble getting in. There aren’t actual ticket sold for films at SXSW; seats go first to badge holders and then film pass holders, and after that, the general public (non-badge holders)… so when I saw the line turn around the corner, I had to ask our sales rep Josh Braun to find them and let them in with our guest list. I later heard that this was the most massive line at the G-Tech!

It was very exciting to see the theater fill up, and pleasantly nervewracking to see the film with an audience for the first time. After the first ten minutes, I began to feel relieved that there were no technical issues, it looked and sounded great (thanks to our two post houses back in NYC) and I was also amused to hear our editor Shannon Kennedy laughing at the film and crying as if she was seeing it for the first time! Every time she did that, I looked over at her and thought, hey, didn’t you edit that, I mean, you knew it was there! But she made me relax too, and so I stopped thinking and just began watching and getting into the story. Thankfully people laughed during the scenes we thought were funny (mainly where Jeanette and her best friend Lori are hanging out; Lori is a musician from New Orleans and has a very dry sense of humor) and there was tension when we thought there was tension.

People had interesting questions for us during the Q&A. How did Cameron establish trust with Jeanette? Jeanette answered that one by saying that a lot of the media came after her when her brothel got busted, but she never felt they were listening to her, but then Cameron came along and seemed to be listening. Did we have outreach and social engagement plans with the film? Yes, we do. We really don’t see the issue as being about right or wrong, but about human rights. I do think that prostitution is a demand-driven business, and that women engaged in sex work deserve access to police protection (rather than police exploitation) and health care. If our character portrait can make society think about the men involved in these transactions more, then yes, we’ve done a good job with the film. What was the name of her dog, also featured in the film? I didn’t know this but Jeanette told everyone that she named her dog after Heidi Fleiss, and so she’s named Heidi Ho. That got a bunch of laughs. And Cameron later told me that an alternate name for the dog was Heidi Fleas. Brian Brooks of indieWIRE raised his hand to ask a question and also to apologize for the behavior of the crass men in the one N.Y. scene where Jeanette was jeered off the stage from a public appearance. A surprising number of people revealed that they were from New Orleans, which made Jeanette feel quite at home.

We had a party after the screening, and while it was meant to be only 7-9, I think we forgot to tell people to leave. It was held in a penthouse across the street from the Austin Convention Center and provided a view of the city that most of the attendees had not seen. Our director’s friends from back home (who came to SXSW to be with us at the premiere) set it all up with New Orleans beads and served us champagne and gumbo, a surprisingly good food combination. People were enjoying the chance to talk to the madam, and Jeanette’s best friend Lori danced the night away with her girlfriend. I also met fellow blogger Anna Higgs (producer of The People vs. George Lucas) at our party (thanks for coming and I’m going to your film tonight!).

So what’s next? We had a number of distributors and a good show of press at our first screening, so we await their reviews, and their comments. Filmmaker magazine’s Alicia Van Couvering published this interview with Cameron here. And I just hope, as any filmmaker does, that people get it. Prostitution in general is a difficult thing to talk about. It brings up all kinds of personal and emotional reactions. Through Jeanette’s story, we wanted to focus on the way that government policies and moral hypocrisy has affected her life in a very tragic way. Jeanette herself said that people (in the media and in broader society) are constantly trying to get her to admit shame, but she is not ashamed of what she did.

I have a few days of watching other films now, and go back to NYC on Sunday for the next chapter in the life of our film. Thanks for listening, and hope to catch up with you at our next festival screening (which will be announced next week)! To everyone who has encouraged and supported us along the way, Thank You!!! — Mridu Chandra