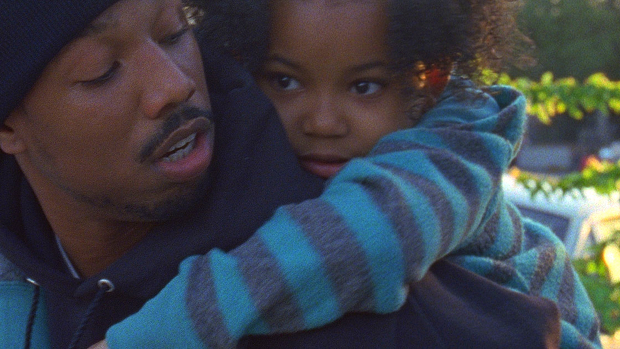 by Alexandra Byer
in Directors, Filmmaking, Interviews, Sundance
on Jan 19, 2013

On January 1, 2009, a Bay Area Rapid Transit officer shot and killed unarmed 22 year-old Oscar Grant, who was being detained on the BART train’s platform for alleged fighting. With the help of cellphone cameras, witnesses filmed the officer shooting Grant and both the footage and news went viral. When the officer was convicted of only involuntary manslaughter instead of second degree murder or voluntary manslaughter, peaceful protests turned violent and riotous throughout the Bay Area as the city made its anger known.

Raised in the Bay Area himself, Ryan Coogler tackles the sensitive topic of Oscar Grant’s life and death in his first feature film, Fruitvale. After gaining recognition and accolades for his successful short film Fig, which won both the DGA and HBO’s Student Filmmaker Awards, Coogler’s screenplay Fruitvale made its way to the Sundance Screenwriter’s Lab. Appropriately, the film was fully shot in Oakland and San Francisco, and majorly supported by the San Francisco Film Society’s production and post-production grants. Produced by Nina Yang Bongiovi (The Children of Huang Shi) and Forest Whitaker (The Last King of Scotland), and starring Octavia Spencer (The Help) and Michael B. Jordan (“Friday Night Lights”), Fruitvale premieres in Park City today.

Filmmaker: What was the public reaction in Oakland and San Francisco to the recreation and retelling of Oscar Grant’s death and the city’s subsequent upheaval for your film?

Coogler: By the time a press release had been leaked about the film’s production, we were already gearing up to shoot, so I wasn’t really in a position to pay too much attention to the public reaction to the film. Because the issue was one that was so close to home for the Bay Area, and local media had such a significant part in the case when it happened, it was natural that they covered it when news of our film got out. The Bay Area is a diverse place, not just ethnically, but diverse in opinions. Some people were happy that we were telling the story, and saw it as being a form of healing. I’m sure others thought that it would bring back painful memories.

Filmmaker: Why did you decide to make a narrative feature about these events? Why not make a documentary?

Coogler: I decided to make a narrative feature about these events for several reasons. For one, I wanted to tell this story sooner than later, because events like this keep happening. One of the advantages to fiction filmmaking versus non-fiction filmmaking is that a fiction project can usually be completed faster. My favorite documentaries all took several years to make. Another reason was the difference in perspective in character driven fiction films versus documentary films. I personally believe that narrative filmmaking, when done right, can get you closer to a character than a documentary can.  In this story, I wanted the audience to be as close to Oscar as possible, without the barrier of the character knowing that he is being filmed, which is a barrier that is difficult to break in documentary filmmaking- especially with a limited schedule.

Filmmaker: Did the film’s controversial nature play a large role in finding your team and cast? Did people join the film because they were passionate about the subject?

Coogler: I definitely think that people joined the film because they are passionate about the subject matter. I don’t think that controversy played as much of a role as the passion of the cast and filmmakers involved.

Filmmaker: You have undertaken difficult subject matter with your short films, but what were the biggest challenges of making your first feature film?

Coogler: The biggest challenges of making this film were two things – a tight shooting schedule and the biopic elements. Our schedule was insane. We shot in 20 days, but it was really more like 16 because our BART shoots were limited to 4-hour days. We worked with a child actress, which would limit our days as well. We also had to shoot a lot of night exteriors, and because it was the summer, we were often fighting to beat sunrise. In all, the most difficult aspect of the film is that it deals with real people, nearly all of whom are still here. But the most important person in our story, our main character, isn’t. I never could go to Oscar and ask,  “What did you think about this?” or “How did you feel about that?” As bad as I wanted to, I couldn’t because Oscar is gone.

Filmmaker: Do you think that this film will have an impact on the way this case is seen? And what impact do you think its message will hold in the future?

Coogler: I am not sure if our film will have an impact on how people view this case. My greatest wish for this film is for it to have an impact on the future, and make viewers think about how we treat each other.