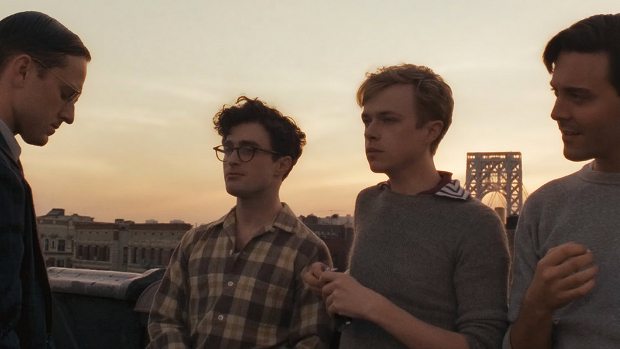 After premiering his short film at the Sundance Film Festival in 2002, director John Krokidas vowed to be back two years later with his first feature film. Krokidas found that it took a bit longer than anticipated to get his film to Park City, but eleven long years later, Kill Your Darlings premieres in competition today at Sundance.

The Beat generation has been a popular subject of films lately, but rather than adapt a Kerouac book or Ginsberg poem, Krokidas follows the nascent writers during their days at Columbia University and one particular event that shaped their future work and careers. In 1944, Allen Ginsberg and Jack Keroac were questioned as witnesses to a murder their close friend committed. Kill Your Darlings, produced by Christine Vachon (I’m Not There), stars Daniel Radcliff (Harry Potter) as Ginsberg and Jack Huston (“Boardwalk Empire”) as Kerouac. Shot on location at Columbia and around New York City, Kill Your Darlings recounts the events and relationships that established a generation of artists who challenged society and literature’s function in it.

Filmmaker: There are some quite high profile people attached to your film. What was the development (from script to screen) of Kill Your Darlings like?

Krokidas: One of [co-writer] Austin Bunn’s many jobs along the way to pay the bills was helping to write people’s biographies, and he co-wrote Christine Vachon’s second book. The movie is a true-life period film dealing with murder, sexuality, and coming of age, and [Christine] has like made this movie nine times, and each time it was something new, creative, and different, so we sent her the script. And one of the most rewarding days of my life was…having Christine fly out to L.A. to meet me to convince me that she needed to produce my film. That was a big, epic day. So that was five years ago, and four years ago we started meeting actors for the project. It is really, really hard to get that first person attached to the movie and build momentum when you’re a first time director. … But I realized that agents held the key to their clients, but when I would ask about their higher profile clients, or people I always wanted to work with, they would become more hesitant. So I realized [the agents] needed to trust me and know that I knew what the heck I was doing in order for them to let me talk and meet with these actors. So I ended up auditioning for agents. … I pitched them the story, what it meant to me, my visual plan, who I thought would be good in each role and why, and really did my research and gave sort of a half hour presentation. It’s amazing if you go in with confidence, even as a first time filmmaker, and you do your homework, and you really study their clients, and…know what an actor can do but has never had the chance to do before. That’s a lot of the reasons I think bigger names want to be in independent films – because independent films give them the chance to do things the mainstream industry usually wouldn’t.  And that’s really the answer of how I put together this cast. It was hard work, and thankfully it was a script that a lot of actors responded to, but a lot of times it was chance.

Filmmaker: How did you prepare to both write and make this film?

Krokidas: What I was really concerned about with making this film was not making it a dusty biopic. I didn’t want it to feel literary because at this time in their lives [Kerouac, Burroughs, and Ginsberg] weren’t like that – they were these awkward, insecure 19 year-olds trying to find the right outfits and cool clothes that belong to them, and romanticize Baudelaire and all the young rebels of time past. So I didn’t want this movie to feel like a traditional biopic. I was also very intimidated and scared about taking on the lives of these big three literary legends who all have such strong characters and sordid, beautiful lives. … So what I decided to do was…only allow the actors to read up to the part from the biographies in which this movie took place. I wanted to know the ‘40s – who they were, what their childhoods that formed them were like, what their relationships with their parents were like, who their friends were in college. I really wanted this movie to be about being young and wanting to change the world. In fact, I have been scared to go back and reread all the books by these three authors that I love so much that kind of helped form me when I was the same age as their characters in the movie because, again, I feel intimidated in trying to live up to their greatness.

Filmmaker: You have said that the best thing about being a first time filmmaker is that you do not know what you are doing, so you have nothing to be afraid of. But were there any moments while making Kill Your Darlings when you were truly scared or questioned what you were doing?

Krokidas: The scariest moment in putting this film together was right before we went into pre-production and were negotiating with the financier. That was the moment that decided if this movie was going to happen because I had been trying for nine years to get my first film off the ground. I had already come so close for it to only fall apart so many times and then have to re-mend my broken heart and get back up on that horse again to try to put it together one more time. I knew this was it. I knew that if this financier and cast fell apart then it was going to be game over for me. That was really the scariest time. I wasn’t sure if this was going to happen or not until the very last minute. But thankfully my financier, Michael Benaroya, took a chance on me to fund this epic, ridiculous period piece and believed I could pull it off in 24 days.

It was a 24-day shoot with a ridiculously big cast, a period piece involving 30 locations and musical sequences…and I had no idea how fast we were going to shoot. We shot faster on this movie than we did on my student film. One night, we’re at Columbia University, we think we have all night until dawn to shoot, but all of the sudden security shows up and tells us we have to leave five hours before we have planned. We had three scenes to shoot and we were in the middle of the first one. As everyone is in the middle of packing up, Ben Foster turns to me and says, “John, we’re here, we’re in costume, no one’s looking, should we climb up those steps of Columbia and run out the door so you have an ending to the sequence?” And we totally stole the shot as everyone was wrapping up in the background. So there were some scary moments like that too.

Filmmaker: Kerouac and Burroughs collaborated on And the Hippos Were Boiled in Their Tanks, a novel about the Kammerer murder, how do you find writing with someone else and sharing that process?

Krokidas: What’s great about working with someone so close to you, someone who has been your best friend for like a decade, is that you already have an incredible emotional shorthand together. Austin Bunn and I compliment each other very well. My strengths tend to lie with story and structure…. And Austin, coming from playwriting and writing short fiction, is so smart with character and dialogue that actually sounds like someone is speaking. And [Austin’s] challenge with this one was to do that but with 1940’s vocabulary. I am very proud of the script we made.

So, I wrote the outline, he wrote the first draft, and then I wrote the second draft, and basically we passed it back and forth between the two of us – we lived in separate cities for a long time. Then life got in the way and we both had to make money…and this project just became something we passed back and forth and were always scared to call it done, to say it was ready. Finally, about five years ago, I got a manager and he asked if I had anything else I had been working on. I showed him the script and he said, “Are you freaking joking me? Why have you kept this in hiding? It’s fantastic!” Sometimes it takes some acknowledgement outside your creative circle to know your work is in a good place and you can let it go.

Filmmaker: It has been said that Kammerer’s murder and the subsequent events were an “emotional fulcrum” for Kerouac, Ginsberg, and Burroughs. Do you think experiencing a traumatic event like this is pivotal to being a successful artist?

Krokidas: I can only speak for myself, but I can tell you that I spent my adolescence romanticizing the tortured artist and wanting to have a more painful growing up or some tragedy in my life. The irony is that when a traumatic event actually did happen in my life it proved to be the most artistically fertile period of my life. My thesis film at NYU called “Slo Mo” was my attempt to deal with the pain after a breakup involving and ex who had addiction issues. This film was very much born out of connecting to my own issues of owning my sexuality and personality, and what I call the emotional violence that comes with the birth of a soul. Also, the longer [Kill Your Darlings] took to get made, the more resonant and rich the material became because the movie was about a young artist trying to claim his voice. So as the years went on, that need to try and get my one shot to show my voice just became that much more present and open and urgent. So for me, the answer is yes. It’s not that I want to open up the wounds and bleed on to the page, but I find…to remind myself, when it’s three in the morning and you’re outside in the freezing cold somewhere in Queens on take three of an insert shot that was supposed to be done four hours ago, you can go back to that emotional place and remember why.