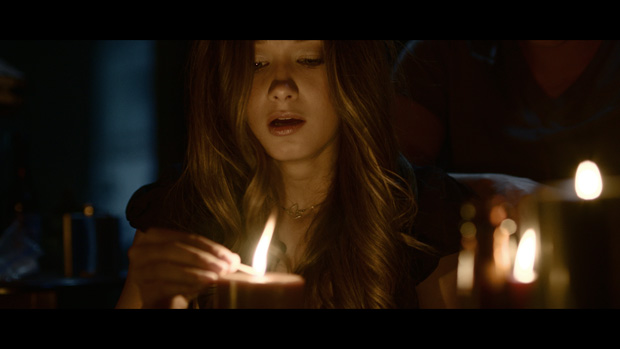 by A.D. Calvo
in Distribution, Filmmaking, Post-Production, Production
on Apr 15, 2013

Before becoming a filmmaker I spent 15 years designing software. Started out as a Mac OS programmer and then moved to Microsoft Windows. My endeavors included all things visual—from icon design and screen layout, to the more abstract design patterns found in system architecture and coding. What I discovered along the way was that the most elegant solutions—the products that worked best, most reliably, and resonated strongly with their user base—were always the most simple and minimalist in design. And there was always room for improvement via testing, focus groups, and refactoring (a techie word for the iterative process of simplification).

You’re probably wondering where the heck I’m going with this, right? Well, here’s the thing: I’ve found these same design principals apply to filmmaking. Think about it. A film has a visual design side (all of the aesthetic decisions for everything from locations and shot lists to one-sheet design), and it also has an abstract side (screenplay, narrative structure, editorial choices). And, just like in software, bad design, or total lack thereof, can really hurt a film.

I’m referring to all things visual here, and have broken these down by the phases of production.

Development & Pre-Production Phases (many of these are producer-created materials but not all producers are creative, so be careful here)

Script Cover. The cover page of a screenplay is one of the very first visual impressions you make, but it needs to conform to the basic standards. A good sense of typography and page layout goes a long way here, and can help set a tone even before the first page is read.

Preliminary Electronic Press Kit (EPK), Project Overview Books, etc. Any document that’s used to visually communicate the tone of your film, long before it’s produced, better look good. Darn good. These can be used for investors, press, casting, etc., and give others a feel for the visual tone you have in mind. Always best to keep it simple and model your materials after other well designed examples.

Investor Documents / Private Placement Memorandum, etc. I’ve seen the most gorgeous materials used for fundraising. Professionally bound glossy guides that can make someone feel like their investing in the next Apple. But don’t be fooled here. Spending lots of money on a glossy book doesn’t matter if what’s on the cover looks bad. Sure, investors care about the financials, but putting your best foot forward on how they’re presented is key (and hopefully not just lipstick on the pig).

Locations. Choice of locations goes a long way in establishing “a look” for your film. Locations can even be characters in the story so choose them wisely. I wrote the screenplay for my first film, The Other Side of the Tracks, with an old train car in mind. It had been converted into a pizza parlor, and was located beside a working set of rails, where commuter trains would routinely whiz by. It stood out strongly with its faded red exterior and helped establish a visual tone for the film.

Production Design. A real no-brainer. Without an experienced (and talented) production designer the aesthetic quality of your film will suffer. If you have a plain white wall it better be by choice, in service to your story. Simple design doesn’t mean no design.

Cinematography. Can’t over emphasize the need for a strong DP. Everyone knows this, but it still amazes me how many ugly films are shot. If you don’t care about cinematography, don’t make movies. And if you can’t recruit an experienced DP, reevaluate your project and materials. Something is wrong. Ask yourself, “What is it that cinematographers aren’t responding to?”

Characters. Casting plays a critical role in the look of a film. Not to be shallow here, but no one wants to stare at a boring or plain-looking actor for two hours, especially on a 50 foot screen. And please, we’re not talking about perfect looking people here. Plastic beauty can be pretty damn boring. Apart from individual looks, you want to make sure there’s substantial visual contrast between each character (hair color, etc.).

Editorial Style. An editor can hold the cards to the final product. His or her choices, in collaboration with the director, will have a profound effect on the overall aesthetic perception of the film.
Visual Effects. Make sure VFX are well executed or they’ll just make your film look cheesy. Hire an experienced and talented VFX supervisor and shy away from “fix it in post.”

Color Grading. Like a brunette going blonde, a cinematographer’s worst nightmare is a bad dye job. It could make your film look cheap and unprofessional. Done right, however, it can add much needed polish and consistency. This is the last opportunity you’ll have to help raise the bar on the look of your film.

Title Cards & End Credits. I do my own title designs, and there’s a website I often go to for inspiration. Check it out. Sometimes simple Helvetica is all you need, but it’s really still not that simple. Placement, spacing, font, size… there are lots of visual choices to be made. I’m a bit old school when it comes to titles and haven’t followed the current trend of skipping opening titles altogether. I love a good opening title sequence. It helps set the tone for what we’re about to see.

One-Sheet. This one could sink your film before anyone’s even seen it. One trick I like to use when designing a poster is creating a thumbnail and pasting it onto a screen grab of the Apple Trailers website (you know, the page with all the mini posters on it). This lets you compare the strength of your design side-by-side with other professionally designed posters. If you don’t stand out here, you just won’t stand out anywhere. It needs to be iconic, from a distance.

Trailer. A poorly designed trailer can really hurt the perception of your film—both in the industry and with your target audience. Before you release a trailer, you can promote your film off the hype alone, and the potential of what you may or may not have shot (everyone is curious). It’s hard to come back from a bad trailer that highlights your weaknesses. Study successful trailers for rhythm and pacing. Note how the cuts are typically in perfect synch with the music. It’s all about rhythm.

Website. Branding on your web site should match your poster (typography, logo, etc.) Branding should be consistent across all things visual.

Okay. So you get where I’m coming from, right? It’s hardly a complete list but good aesthetics will invite folks to give your story a chance. Bad aesthetics will put people off—subliminally, perhaps, but off just the same.

In the end, this is the most important type of design when it comes to solid filmmaking. You can do everything right in terms of aesthetics, and your film can still suck. Big time. Better to watch a good actor, in an honest scene, filmed on an iPhone than a lousy one, with bad dialog, shot on 35mm.

Knowing your Target Audience (in software, the “user base”). Who is the movie for? It’s good to know this before you build it. It’s tough for me to say this because it goes against the precept of Art-for-Art’s sake. But we’re not all David Lynch here, and as much as the industry will ask for something fresh and new, they’ll still want it to conform and fit into a box. Sad but true. So make sure your movie is intuitively designed for the film industry so programmers, critics, distributors and sales agents can wrap their heads around it immediately.

Narrative structure (in software, “system architecture”). I’m a fan of Charlie Kaufman, but, similar to my comment on David Lynch, chances are, “we’re no Charlie Kaufman,” so our ability to bend the rules of narrative structure may be more limited. If you’re looking to play it safe, or sell screenplays, perhaps plots points and beat sheets are the way to go—those tried and true blockbuster patterns. But you can also reverse-engineer more novel design patterns from other successful non-traditional movies. Or, you can even come up with an entirely new structure. Think Memento. Outside the box (but note there’s also more risk).

Screenwriting (in software, “the code”). This is your blueprint for what you’re going to build. The language of screenwriting should be simple, direct and visual. Easier said than done. Note that I’ve separated Screenwriting from Narrative Structure. You might be great with prose and dialog but not so good with structure (or vice-versa). In software, the roles of architect and programmer are typically separate. Interestingly, that’s not the case when it comes to designing a film. Perhaps it should be?

Performances. Actor performances also fall into a type of abstract design. In any scene, an actor must get from point A to point B in a cohesive manner that’s grounded in human nature, whether physical (as in blocking patterns), or emotional (e.g., acting technique). Both require forethought and design and can be modeled using existing patterns and techniques.

Editorial. Our friend the editor is back, playing a crucial role in both the visual and the abstract outcome of your film. Finding someone who can balance a storyline with a rhythm that weaves together only the most nuanced and sincere performances is key. An editor’s choices can be almost subliminal at times, weaving a thread that can communicate on a more invisible plane. The editor’s craft is most effective when direct, simple, and, oftentimes, brutal in interpretation of what works and what doesn’t work.

Reshoots & Test Screenings (in software, refactoring and usability testing). An iterative approach to filmmaking is time-consuming and costly, but can yield a better result by spotting and troubleshooting problems before it’s too late to do anything about them. The key is knowing when enough is enough (when you’ve hit that Law of Diminishing Returns) and avoiding change for change’s sake.

Picture Lock (in software, code-complete / release). Gotta love this moment. Ship it! The cost of cracking it open again, beyond this point, may seem simple, but, just like in software, it can introduce all kinds of instability. Once you lock. Lock. And move on to the next.

So that’s pretty much it. Design patterns are key to any industry, and allow you to improve quality while scaling output and reducing risk. In recent years, there’s been a new trend in software development called Agile Development. It’s iterative and aggressive, relying on parallel design and development. Last year I produced and directed two new films, both in about 14 months. The Midnight Game was being written while we were still in post on House of Dust. I scouted the house for Midnight Game before we filmed House of Dust. I’m not advocating rushing through projects, but the filmmaking process can be dramatically improved by adhering to existing models. And one can achieve great things by keeping it simple. I wish I had always known that.

A.D. Calvo’s first feature, THE OTHER SIDE OF THE TRACKS, was released in 2008 on Showtime and internationally by 20th Century Fox. His second, THE MELANCHOLY FANTASTIC, premiered at the 2011 NY International Latino Film Festival. In 2012 Calvo completed two back-to-back thrillers, HOUSE OF DUST and THE MIDNIGHT GAME. THE MIDNIGHT GAME recently premiered at the 30th Anniversary Miami International Film Festival. His website is Good Night Film.