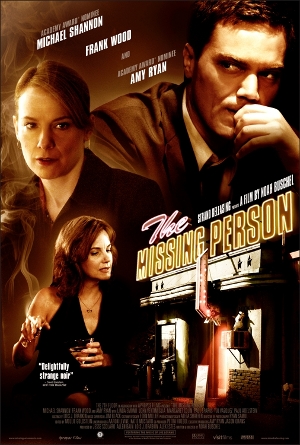 It’s hard to go head first into film noir and not regurgitate the themes, styles, dialogue and characters from the past. But Noah Buschel in his latest cleverly dances around the genre to tell a story of a man who’s hit rock bottom and how he unknowingly redeems himself.

Set in the modern day, Michael Shannon gives one of his best performances in a budding career as a gifted character actor with his portrayal as sauced Chicago private eye John Rosow. When we meet Rosow he’s extremely hung over and gets a call to do a job tailing a guy with little information on why but for a lot of money. Given instructions by the attractive Miss Charley (Amy Ryan), Rosow is onboard a train to L.A. As his job continues he begins to learn more on why the guy he’s following is so important and why he’s the best man for the job.

Okay, that sounds like all the noirs you’ve ever seen in your life.

But instead of following Rosow as he stumbles upon clues and inevitably shows he’s a much better detective than the bad guys gave him credit for, Buschel keeps the plot at bay for most of the film, instead concentrating on the complex Rosow and exploring how he got to where he is now. And Shannon makes this exploration a joy to watch; grunting, slurring and cracking wise through most of the film, he makes Rosow out as a guy who’s seen it all and has had enough of the job but can’t think of anything better to do. Think of a much more disturbed Harry Caul from The Conversation.

The mood is also set by the top notch work by d.p. Ryan Samul, and the predominant jazz score. You can almost smell the stale cigarettes as the music comes in when Rosow enters a bar.

There really is no grand villain in The Missing Person or sultry femme fatale, we’re in a world “beyond right and wrong,” as Rosow puts it in the end. A place where getting by is the only thing that matters.