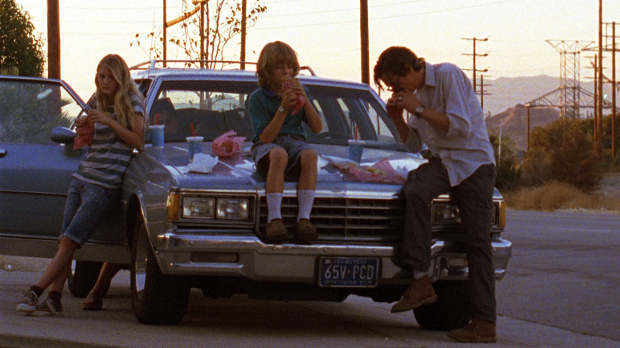 Winner of the Crystal Bear at the 2012 Berlin Film Festival, Olivia Silver’s debut feature Arcadia puts a more intimate spin on the road movie. In the film, father Tom (the always excellent John Hawkes) takes his three kids, teenager Caroline (Kendall Toole), 12-year-old Greta (Ryan Simpkins) and nine-year-old Nat (Ty Simpkins) on a 3,000-mile cross-country road trip to California, saying that their mother will join them soon in their new home. However, as the journey progresses, it is clear that the situation is much different than it seems. To coincide with Arcadia‘s opening today at the reRun Theater, Brooklyn-based writer/director Silver spoke to Filmmaker about the roots of the movie, the virtues of film vs. HD, and turns one of the “rules” of filmmaking on its head. 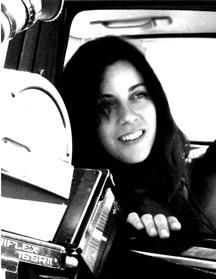 Filmmaker: Where did the idea for Arcadia come from?

Silver: In my first year of grad film school at UCLA, we were asked to sit down and write the first dream or memory that came to mind. There was no other explanation – just sit down and write, for five minutes. What came out for me was a memory of arriving at our new suburban house in the San Gabriel Valley near Los Angeles, after having driven five days cross-country in our run-down station wagon. Eventually, that became my thesis film Little Canyon, which premiered at Sundance in 2009, and which in turn developed into the feature-length Arcadia. One of the things our professors advised was to focus on strong, formative memories that could eventually be turned into films that had the capacity to move people through their authenticity. That was what I was striving for with Arcadia – wanting to connect to people through their own memories and experiences, without the film being a purely navel-gazing film about me.

Filmmaker: The film has a very distinctive look. What lead you to shoot on 16mm?

Silver: Again I have to give credit to UCLA, which at the time insisted we shoot our first two short films on 16mm. We learned to edit on the flatbed, cut and splice the film, conform the workprint — all that. It gave me a profound respect for film, for the nuance and depth it brings to an image, the texture of it – which I still haven’t seen fully replicated in HD. HD has its amazing pluses as well, but there was something about film that grabbed hold of me and wouldn’t let go. Not only the aesthetics of it, but the process – being forced to choose every shot wisely and carefully, and shooting economically. It lends a certain hushed respect and focus to the set from the whole cast and crew.

Filmmaker: What are your feelings about the road movie? Where do you see this film in the context of the genre?

Silver: I felt the road was a very powerful way to mirror the internal changes going on in Greta. There’s something about a changing, shifting landscape – the beauty and even the ugliness of it, and most of all the revelatory nature of it as you drive along – that made a perfect pairing with the massive changes going on within Greta and in her life. Road movies tend to be about adults – buddy flicks, or films like Paris, Texas. I felt it was interesting to tell a coming-of-age story within the context of a road trip, which isn’t seen as much. In addition, the car was a perfect metaphor for the family “prison” Greta is stuck in – whether squeezed into a backseat, or in a tiny motel room – she can’t get away from her family. This can be incredibly claustrophobic, and forces you to define yourself.

Filmmaker: How significant was the casting of John Hawkes to your film? What did he bring to proceedings that you had not anticipated?

Silver: I was really fortunate that John responded to the script and agreed to star in it, because I couldn’t have asked for a more perfect Tom. I was looking for an actor who had the capacity for charm, kindness, humor, and a sort of unhinged, loose-canon danger – all mixed into one. It’s much harder to find than one might think. John brought so much depth of character to the role, not to mention skill and dedication. He’s a fantastic person to work with, let alone the power he brings to all of his films.

Filmmaker: It’s a cliché that you should never work with kids, but was it easier having real-life siblings playing brother and sister in Arcadia?

Silver: I think that cliche is so false! I love working with kids. They bring an element of surprise, especially when they’re as strong and talented as the Simpkins siblings are. There’s something about a brilliant child actor that adds a magnetic quality to the film and won’t let you look away from the screen. I was so lucky to find that in not one, or two, but three kids performing in Arcadia. It was also an incredible stroke of luck that Ryan and Ty happened to be siblings. Not just because they look alike, but because they brought their entire real-life relationship to the film, which can’t be written or faked.