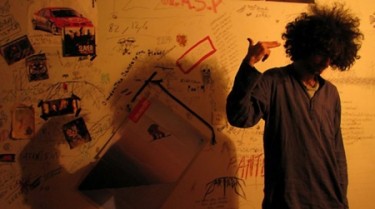 I caught Bahman Ghobadi’s No One Knows about Persian Cats, opening tomorrow at the IFC Center, when it screened at the Doha Tribeca Film Festival. In the magazine, I wrote the following:

The story told by the Iranian Kurdish filmmaker Bahman Ghobadi’s No One Knows about Persian Cats would have fit comfortably into an afternoon of mumblecore films at SXSW. A young couple tries to form a band and score an out-of-town gig. Because it’s set in Iran, however, the band is outlawed, money must be scraped together for the expensive exit visa, and the female musician is not even allowed to play music in her Islamic culture. The film is both a spirited, loving depiction of Iran’s underground rock scene as well as gut-wrenching tragedy. The audience seemed shocked during the Q&A, as Ghobadi discussed his exile in London. “My last film was banned and this one is too,” he said. “I was scared for my life [while making it].” Ghobadi says he plans to return to Iran one day. The people who would tell me to leave my country [to make movies] are not from my country.”

In the upcoming Filmmaker, online and flying to your mailboxes next week, Livia Bloom interviews Ghobad about the film, his method of working, and some of the political controversies surrounding his work and Iranian cinema in general. Here are some excerpts from her interview:

On making No One Knows about Persian Cats:

FILMMAKER: What brought you to the film No One Knows About Persian Cats?

GHOBADI: Censorship, repression, and pressure: these are the things that brought me to the film. I had been trying to make another film for three years, but the government gave me a very hard time and would not release permission for it. I was kept at home and I couldn’t do anything; it was a struggle day after day. Often I thought about committing suicide. Finally, I packed everything, and wanted to leave Iran.

Then, however, a friend who was visiting said, “This was exactly what the system wants. They want you to leave and not to work. If you really want to fight this, you have to stay here and do something–move! If you cannot make films, do something else; go study music. You love music; do something in that world.”

So I did: I went to study underground music, and I got to know many underground bands in Iran and Tehran. I realized that these kids were very brave, and that they were doing what they want to be doing. They were making music in their basements without any money, without any equipment, but with a lot of courage. I decided to make a film in their style; I learned this particular style of filmmaking from them. With the music of these kids, my whole view of the world has changed. They have opened a new window in my life, and I owe them very much.

FILMMAKER: To what extent are your films written or spontaneous?

GHOBADI: Most of the time, I don’t even have a script. I start filmmaking with just two or three written pages. I go to the location and prepare my dialogue about half an hour before I start to film, and I usually complete the script after I’m done directing. I do this in order to be as natural and close to reality as possible.

Before filmmaking, I go to live with my characters. We stay together into a big house and I don’t separate from them. I want to monitor every little thing that they do and the precise way they do it. I observe them very closely, and then I ask them to repeat some of those parts the next day in front of the camera. I don’t give them unreal text; I want them to use their own lives. I take from them, and then I give back to them.

Usually when I ask writers to cooperate with me, it’s because I want them to challenge my ideas. So if we sit down and I say, “A boy and a girl…” Then the person will say, “Why a boy and a girl? Why not two girls? ” I want them to constantly question my ideas and to complement areas where I might be lacking. This is the second time that I’ve asked a writer to sit down with me to complement and complete my ideas.

We can’t really touch the scenarios because we want to make films exactly like the lives that are happening. What we do is control the stories a little bit and give them a cinematic shape. We follow them, we record all the events that are happening in their lives. Everything that you see in No One Knows About Persian Cats is exactly the same as what’s happening in real life —we just give it an ending and a cinematic form.

On his recent public dispute with Abbas Kiarostami:

FILMMAKER: Your recent conflict with Kiarostami has been of great interest to the film community. Would you like to say a few words about that?

GHOBADI: I’d like to set the record straight for the last time here in this interview. First of all, I have a lot of respect for Abbas Kiarostami. He is my teacher and I have the greatest respect for his films and his work. He was like a father to me, and when I wrote to him [publically], it was like writing to one’s father. He knows, better than anyone else that in the Iranian filmmaking world, that I have the highest regard for him.

Recently, Abbas Kiarostami did an interview with an Arabic newspaper in which he congratulated me, Bahman Ghobadi, on leaving Iran. He said it in a sarcastic tone, implying that I had run away. It’s not right for him to make me appear as a cowardly person who would flee Iran. I did not run away; I was made to leave my country.

He also said, “I’m living in my country, in my homeland, and making films in my language,” thereby implying that I, Bahman Ghobadi, was not doing this. Yet at exactly the time that he was making a film with Juliette Binoche in a non-Persian language [Certified Copy], I was making Persian Cats in my own language and in my own country. Of course there is nothing wrong with making films in other languages, but the fact is that he shouldn’t have made me seem like a coward and himself a hero in front of people. I did not appreciate being put down in front of my own people when I had no choice other than to leave.

He’s in an international boom. He’s an international figure who’s very safe in Iran. But he makes it sound like everybody can sleep peacefully in Iran. That is really not the case. If you’re in a position of power, you should not assume that everyone else is in that same position. So what I am saying is, “Please do not make it sound like all the people in Iran have a peaceful and calm life like you do.” When I open my mouth and say something, I want to represent the reality of life in my country. The truth is that we are in a very bad situation in Iran, and we need to talk about it.

Mr. Kiarostami must remember that there’s a big difference between his filmmaking and my filmmaking; we’re not making the same kind of films. My filmmaking, like that of Jafar Panahi and Rakhshan Bani-Etemad, is political; we take the camera is taken out into society. Naturally, we don’t get permission to film as easily as Kiarostami does to make his “art” films. I want to speak of political and sociological resistance in my films, as I have always done and as I will continue to do.

In my letter to him, I invited him for further dialogue. But I want to ask you to do some research and find out whether or not I’m telling the truth. I want you to find the truth on your own.

Translated from the Persian by Sheida Dayani