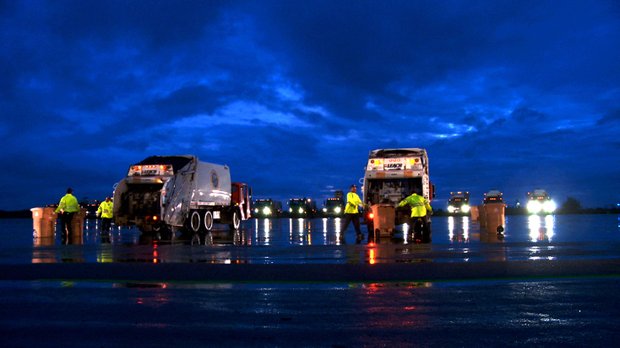 Since its world premiere at the 2012 SXSW Film Festival, Andrew Garrison’s documentary Trash Dance has been a festival favorite, picking up audience awards at both Full Frame and Silverdocs. The film chronicles innovative choreographer Allison Orr’s attempts to wrangle a group of garbage men and turn them, and their trucks, into the participants in her latest project. Filmmaker spoke with the Austin, Texas-based Garrison, an experienced non-fiction director known for such films as Third Ward TX and The Wilgus Stories, about the process of making Trash Dance, which opens at the reRun Theater in Brooklyn today.

Filmmaker: Why did you and Allison Orr decide to undertake this project?

Garrison: I did not know Allison before I started filming. I had read about some of her other pieces in our local paper — dance projects with skaters and with Elvis impersonators. My original idea was to find her and ask if I might film her working on whatever the next project would be. I was imagining a short film. But when I finally reached Orr she was going to start working with the Solid Waste Service Department the following week. She had already spent months getting permissions from the city to do her project. She said if I showed up at 5:45 a.m. next Tuesday morning, I could start when she started. Since I was there from the first day, everyone just assumed I was her crew. My agreement with Allison is that I would show audiences what I saw. She would have no right to edit. And in fact, she did not see the film until it was in fine cut.

Filmmaker: What did you learn from trailing the sanitation workers on their routes?

Garrison: There were several things. For one thing, they really knew everyone on their routes… where the old people who might need help moving their bins back lived, where the kids were. There were several stories of people who had been assisted in emergency situations by the sanitation crews. I was also surprised at how many people were working second jobs. Almost everyone had a second job or they were going to classes. And I was greatly impressed with how dedicated people were to the job — there was genuine pride in doing it right.

Filmmaker: How hard was it to convince them to engage in the choreography?

Garrison: That was Allison’s task. I was the observer. If they had not engaged with her, that might also have made a good film — different, but possibly good. I had been shooting for almost eight months before she had really locked in on some core performers. So I was filming a lot of different people for all those months, watching to see who would really step forward and commit.

Filmmaker: How does Allison’s choreography manage to encapsulate a message and how did you meld that into the film and how you directed?

Garrison: Allison’s choreography is a result of her process of watching and talking with people before any performance planning. The choreography is everyday movements performed in a different context which enables us to see them and the people behind them. She said the 90% of her work in the beginning is just listening to people. This sounds a lot like the way I work. As for message, Allison answers that question in an interview that took place two nights before the performance. Paraphrasing, she says, that her point is to bring people together who might never get together otherwise to be in a shared moment. And then the audience begins to wonder, “What’s this person’s life like?”

Filmmaker: As a documentarian, how important is it for you to shed light on the overlooked participants and activities in our everyday life?

Garrison: That is some of what I love about making documentaries, and watching them — to get let into worlds and places that I might have otherwise never seen. I’m also really attracted to people who have found ways to use their gifts of creativity to exercise power in their lives. I love seeing people who have figured out how to claim their own space in the world — to fully “self-actualize,” as the psychologist Maslow said. There is this fundamental human need to make stuff. I think of it like a weed breaking through concrete to make a flower — such an exciting surprise. We are born with this imperative to give shape to the world. It is political, physical, and spiritual.