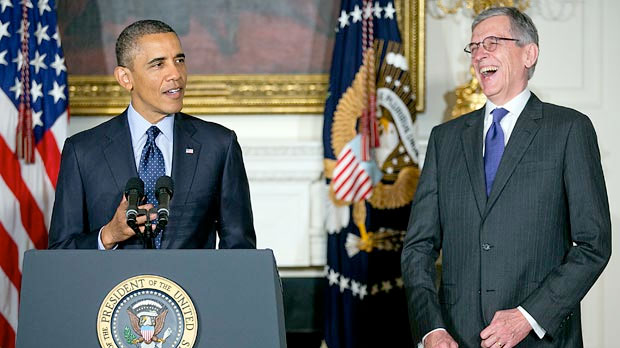 by David Rosen
in Distribution, Filmmaking
on May 16, 2013

“I am in this race to tell the corporate lobbyists in Washington that their days of setting the agenda are over.” Guess who said these memorable words? In November 2007, then-presidential candidate Barack Obama uttered this now all-but-forgotten campaign promise.

The president recently announced his plan to appoint Tom Wheeler (above), a true industry insider, to head of the Federal Communications Commission (FCC). Wheeler is a career water carrier for corporate interests. He served as head of the National Cable Television Association (NCTA) from 1979 and 1984, and ran the Cellular Telecom and Internet Association (CTIA) from 1992 through 2004. He currently is a managing director at Core Capital Partners, a venture-capital firm and has been a longtime Obama fundraiser.

The fix is in. As Jon Brodkin of Ars Technica points out, the giant telecom companies, including AT&T and Comcast, have championed Wheeler’s appointment. Equally troubling, Gigi Sohn, head of the “liberal” policy group Public Knowledge, joined the chorus applauding Wheeler, rationalizing his past lobbying roles: “But his past positions should be seen in light of the times and in the context of his other important experiences and engagement with policy.”

Wheeler is expected to continue the pro big-telecom policies of the current chairman, Julius Genachowski. One issue that will likely define his tenure is net neutrality, the policy by which all data is equal on the Internet. In 2009, he warned:

Rules that recognize the unique characteristics of a spectrum-based service and allow for reasonable network management would seem to be more important than the philosophical debate over whether there should be rules at all. … The wireless industry’s initial reaction to net neutrality was to question its need and warn of “unintended consequences.” Accepting the inevitability of the concept, however, and working to maximize its positive effects – from appropriate network management, to flexible pricing and even new spectrum – could be the opportunity for a big win.

An interesting sideshow over Wheeler’s likely policy with regard to net neutrality, industry consolidation and other issues will likely take place when he appears for the confirmation hearings before Senate Commerce Committee headed by Jay Rockefeller [D-W.VA]. Rockefeller, along with 36 other senators, backed his former staffer and FCC commissioner, Jessica Rosenworcel, for the chairman’s position.

Over the last decade-plus, there’s been an increasingly close relationship between the FCC and its corporate clients – to the detriment of the American public. This was most graphically displayed in 2011 when Commissioner Meredith Attwell Baker, shortly following her approval of Comcast’s acquisition of NBC Universal, took a well-paying position with the cable giant.

Similar revolving doors are evident in the career paths of the three most recent chairmen. Kevin Martin, a Bush-II appointee, is now with Patton Boggs, a leading Washington, DC, law firm and lobbyist. Michael Powell, Gen. Powell’s son and appointed by Clinton, now heads the cable industry trade association, NCTA; this is Wheeler’s former position. And William Kennard, also appointed by Clinton, previously an executive with the banking firm, Carlyle Group, where he specialized telecommunications and media in investments; he now serves as the U.S. Ambassador to the European Union. One can only wonder where the departing chairman, Genachowski, will end up.