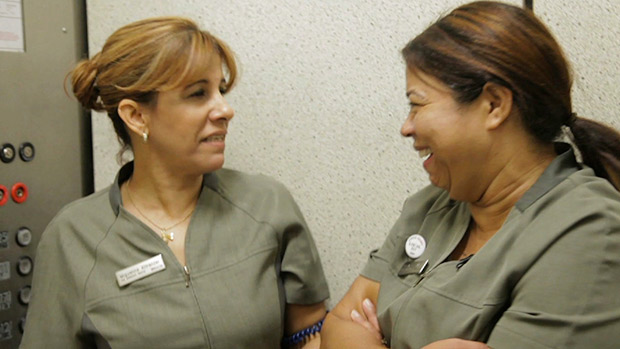 by Michael Murie
in Directors, Filmmaking, Interviews, Production
on May 29, 2013

Margo Guernsey has produced promotional mini-docs and videos for a number of non-profits, but for her first feature-length project, “Councilwoman Castillo,” she is focusing on the story of a hotel housekeeper, Carmen Castillo, elected to the City Council in Providence, Rhode Island. The project will cover Castillo’s first three years in office starting with her election in November 2011.

Guernsey spoke to us recently about how she became interested in the project and her strategy for shooting and funding this low budget, multi-year project.

Filmmaker: What is the story?

Guernsey: It’s a story about a hotel housekeeper elected to public office, but it’s a story about a lot of things. A lot of people are fed up with politics as usual, and this is one opportunity to think outside the box; maybe if we changed who we elected to office, perhaps things could change?

So one question is how would public policy change if more low-wage workers were elected to office? I might be suggesting that things would be different, although it’s a story currently without an ending. We’re following her first term in office, which will take us through the election cycle of 2014. We don’t know if she’ll have any effect, if she’ll be able to have an impact, and what kind of policies she may or may not be able to bring to city hall.

It’s also a personal journey about her growth and her experience in politics. A lot of times these stories end when somebody is elected, and we’re saying maybe that’s when the story begins. Lets go inside local government — what is it like to try to make public policy after the campaign rhetoric is over?

Filmmaker: This is your first feature-length project, how did you decide to make this movie?

There’s something about her, but it was not a project I was planning on. I wasn’t looking for a subject to follow. I ran in to her at a baby shower, and she told me she was running for office. I thought that this was unbelievable that we were going to have somebody in office that is doing one of the most menial jobs in our society and yet she is going to be making public policy. That doesn’t happen very often, and I thought I should start following it.

She’s somebody who’s an inspiration to me, and I just had a sense that once she was in office things would happen — not that I know what’s going to happen, but there’d be sort of a narrative arc to follow. 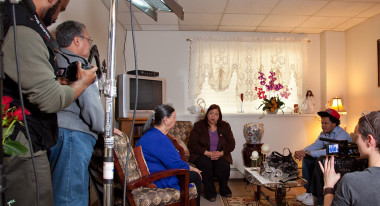 Guernsey: You know I keep calling it a feature-length project, but it could end up being a one-hour special. It kind of depends on who picks it up. I do think that it’s important to follow her for a number of years, and the point is to have a narrative arc; for there to be a real story. I wanted to have time for us to get in to that story.

Filmmaker: You’re already about one third of the way into it?

Guernsey: We’re about half of the way into her term and probably we’ve only shot about one quarter of the film because I took a little while to figure out what the threads were that we were following.

Filmmaker: Obviously you’re not following her around every day. What’s your strategy? How are you covering this over multiple years?

Guernsey: What we’re doing is picking up on threads of the story that we think are relevant to the bigger story. For example, she’s recently started supporting some hotel workers in Providence who want to form a union. Her hotel is union and that makes a difference to her, and so we started to follow them. We think she’s going to try to bring some legislation to the city hall regarding this, which is what makes it feel like it’s a thread that’s relevant.

We’ve also followed some neighborhood activists who are doing work in her community who she has been working with, planting trees and cleaning up the neighborhood and things like that. It’s an interesting thing because they represent the other side of the neighborhood; I wouldn’t call it a divided neighborhood but there’s a large Hispanic side and there’s the side that’s more Anglo.

It’s mostly trying to figure out where the action is going to be. Some of the city council meetings are extremely boring so we’re trying to look at the agenda and figure out when there will be a controversial vote and those will be the ones we cover.

Filmmaker: How are you funding this?

Guernsey: Primarily through grass roots funding. The Rhode Island Council for the Humanities gave us a small grant initially, LEF Moving Image Fund gave us a pre-production grant, and we’ve had a few donations and we are now doing a Kickstarter campaign. Everybody is getting paid, but getting paid their lowest rates, so this is my passion project for everybody.

Filmmaker: Who else is involved with the project?

Guernsey: Nikki Bramley is our director of photography and there are a couple of other very talented camera people, Desi Washington and Jenny Alexander, to make sure that we’ve always got someone when we need to be shooting. Everyone has these busy schedules so it’s nice to have a team, a group who can work together.

Filmmaker: What are you primarily shooting this on?

Guernsey: Primarily the Sony EX1. We also decided to shoot some on the Canon 5D in the hotel.

Filmmaker: You said you’re looking for an editor at the moment. Who put together the video for the Kickstarter campaign?

Guernsey: I edited it myself. I cut it, but I have too much respect for real editors to take this on myself.

Filmmaker: Has anything unexpected happened so far?

Guernsey: Well it depends on how you define unexpected. There’s some personal things in her life; she got married, that was unexpected. There have been some little things like that. Politically there hasn’t been anything unexpected although someone said the other day, “You know, Carmen’s been in office a year and a half and she hasn’t introduced a bill yet,” which is true, and I wouldn’t have expected that. So that will be something we’ll follow up; why not? She’s such a leader in a lot of ways but she hasn’t introduced anything new yet.