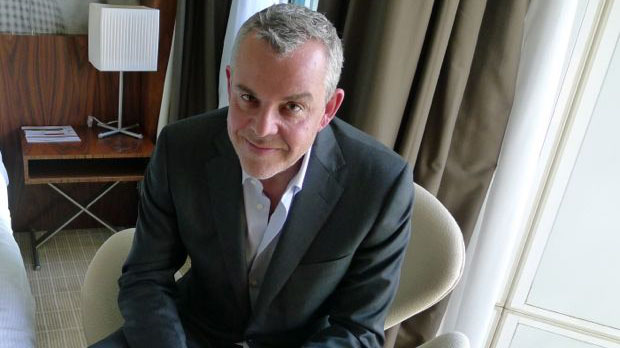 by Ariston Anderson
in Actors, Festivals & Events, Interviews
on May 29, 2013

Few movies were so widely talked about at Cannes as Ari Folman’s The Congress, a part live-action, part-animated adaption of Stanislaw Lem’s sprawling sci-fi novel. It’s a film that explores society’s obsession with celebrity culture, its constant need for escapism, and what effects technology may have on the future of storytelling. In addition to the gorgeous, other-worldly animation, the acting is stunning, with unforgettable performances by Robin Wright as the aging actress, Harvey Keitel as the hustling agent, and Danny Huston as the scary studio executive, Jeff.

Huston nails the character of Jeff, creating both a serpentine man who’s all out for profit, and at the same time self-consciously aging, fading away into an outdated studio system himself. He seals a deal with Wright to scan her entire persona into a digital entity that he may use in any movie he wants to make, with the condition that she can never act again in real life.

20 years later when her contract is up, he meets Wright in the animated world, threatening this time to take her entire being, to sell her as a milkshake. His motto is “conceal the truth, reinvent the truth.” While he seems to wield the hand of power over Wright, at the same time a cockroach crawls across his desk, next to a handwritten sign scrawled “The Classics.” Jeff introduces us to a scary world where people inhale small tubes of chemicals to hallucinate a dream life, when in reality they’re living in abject despair. And he’s just one pawn in the larger game. It’s an indelible portrait that is haunting in both real and animated worlds.

Huston and I sat down in Cannes to speak of his work on The Congress, as well as his own memories of the forgotten film world and what would it be like if his father were making films today. 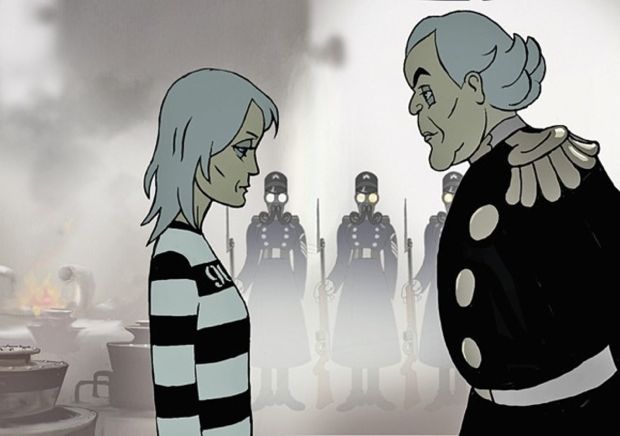 Filmmaker: How did you succeed in making the studio exec both sympathetic and maleficent at the same time?

Huston: I think he’s caught within the studio system himself, and he’s trying to survive. There’s this sort of Darwinian survival. And obviously he’s been fed up in the past with actors and their choices. He seems to have a problem with Australian actors. So he comes from a sort of certain frustration, which doesn’t make him that kind, but he understands their fears, their idiosyncrasies, their psychologies, their issues. So he knows how he can play them.

And I think this bargain, [with] which I suppose he is kind of buying their soul, this bargain he makes is quite legitimate. I mean, her career has gone down the drain anyway, what’s the big deal? Would you sell your voice and your image for $10 million? Maybe, you know? I mean, it’s not this big, enormous, important, burning, internal quest to perform on stage or something. Yes, it’s one’s work, but there comes a time when one could negotiate.

So I don’t see him as this evil, horrible individual. And when we see him again in the animated world, actually there’s something terribly sad about his office and the cockroach on his desk.

I suppose he represents the classics, right? And you know I suppose I am quite aware of that, with my grandfather being a wonderful actor. There are a lot of people today who wouldn’t know who Walter Huston is. So it’s in that Gloria Swanson kind of way, where she goes to the gates, and the security guard says, “Oh, I remember you.”

Filmmaker: What did enjoy most about working with Ari Folman?

Huston: Trying to understand the inner workings of his mind. I mean the guy has an imagination sort of like a Bosch painting. It’s like, what is going on? I want to see the film over and over again, because some of the images are just outrageous. I enlarged the poster and I looked at some details. I mean there’s stuff in there which you don’t notice, because there’s an element of overload. It’s a trip and a half.

Filmmaker: What do you think is coming next in cinema?

Huston: I’m really interested in the possibilities you can do with cable. The art house cinemas are just so limited now, and to release you really do need to be plastered on the side of every damn bus. There is so much money that goes into the marketing that you better have a big film with effects and visuals to back it all up for the price of that ticket. So with these beautiful plasma televisions and great sound systems that we have at home, one can kind of push subjects.

I think it’s a good time, creatively. I mean there are so many films, aren’t there? In a way also, in a perverse way, I‘d like to stop everybody from making films so we can just sit down and watch all the great films for awhile.

Filmmaker:  What did your father, John Huston, teach you about filmmaking?

Huston: My father, he told me to really just focus on what it is that’s important. I had a Super 8 camera and I was filming everything, and he said once, “Stop it, stop it.”  He said, “What do you do when you look from left to right and right to left?” And I said, “I give up.” He said, “You blink. That’s a cut. You have to concentrate on what you are trying to say.” And I kind of utilize that for my acting as well. There is a lot of meandering, maybe, but what is it that we are trying to say?

Filmmaker:  How would he fare as a filmmaker today?

Huston: You know, during Under the Volcano, he said, “Daniel, come over here. What do you make of that volcano? Look at that Steadicam,” he said. “I don’t have to lay any tracks. I’m just a guy with a camera.” And I just thought, “Wow.” So for him, I’d be fascinated to see what he would do with a digital camera and a small crew without the whole circus act. It’s like a sort of garage band; between three or four people, you can really make a film. If you’ve got something to say — which is what it’s all about, really — you’ve got content, you can make a film. There’s nobody to stop you. You don’t have that big studio system where you’re waiting eternally for this green light.

I would be fascinated to see what he would do today, what Orson Welles would do, what a lot of people that were sometimes struggling with the studio system would do today. And of course, then you have to market it, and get it released, but even that is kind of interesting now, where you can stream things. Obviously the amount of money, it’s not the same as a theatrical release, but if you do something of merit, people can see it. They can stream it. That’s cool.