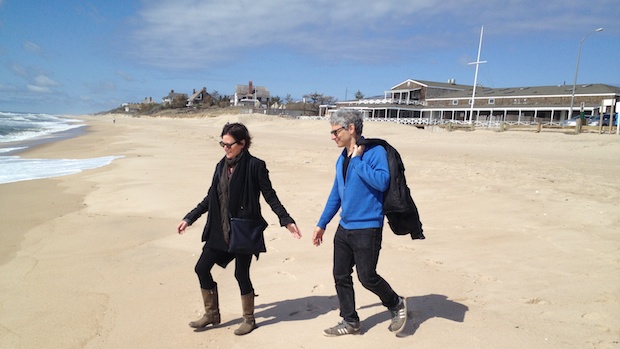 by Caveh Zahedi
in Filmmaking, Screenwriting
on Jun 10, 2013

May 9, 2012
My friend Arnold Barkus and I decide to collaborate on a script about the true-life relationship between outsider artist Joseph Cornell, a 59 year-old virgin who still lived at home with his mother and crippled younger brother, and Joyce Hunter, a 19 year-old waitress and teen runaway.

January 17, 2013
Arnold and I submit a draft of our script, titled The Story of Joseph Cornell and Joyce Hunter, to the Hamptons Screenplay Lab.

March 18, 2013
I receive a voicemail from David Nugent, the artistic director of the Hamptons International Film Festival. He informs me that our script has been accepted to the festival’s Hamptons Screenplay Lab.

March 26, 2013
I decide I don’t like the film’s title anymore so I change it to The Gift. I inform David Nugent of the change. I also ask if we can pick our “mentors” by any chance. He says no.

April 5, 2013
The mentors are announced and it turns out that my old friend and film school classmate, Lisa Muskat (best known for producing David Gordon Green’s films), is one of our two mentors. I consider asking David Nugent if we can request someone else, simply because she’s someone I would have given the script to anyway. But the part of me that believes everything happens for a reason argues that maybe there was a cosmic reason that Lisa was assigned to be our mentor and that I should not get in the way of divine providence.

Our other mentor is Andrew Bienen, who co-wrote Boys Don’t Cry. My friend Ramin Serry went to Columbia film school with Kimberly Pierce, so I ask him if he knows Andrew. He does and tells me that of all the people in the world, he can’t think of anyone he would rather get script notes from.

April 8, 2013
We receive our Hamptons Screenplay Lab itinerary. Apparently, the hotel where we are staying has free bicycles and is near the beach. Never having been to the Hamptons before, I am imagining The Great Gatsby.

April 9, 2013
I now hate The Gift as a title. It’s generic and boring. I decide to change the title to The Brief Love Life of Joseph Cornell. I email David Nugent to ask if it’s possible to use this title in reference to the project in any future public announcements. No answer.

9:17 AM: We leave for the Hamptons. It’s cold and rainy. So much for my fantasy of biking to the beach.

5:00 PM: After way too many hours spent in unbelievable traffic, we finally arrive at what is arguably the nicest hotel I’ve ever stayed at. The hotel is Swedish so each room is named after a famous Swede and decorated accordingly. Arnold and I have been assigned the Arne Jacobsen room, named after the designer of the egg chair. I can’t help wondering what the Edward Munch room looks like and if that wouldn’t have been a better fit.

5:30 PM: I was hoping we could do some work on the script before the beginning of festivities but I’m so wiped out from the trip that I fall asleep.

7:15 PM: Cocktails during which we meet the four mentors, our fellow mentees, and the Lab organizers. Everyone is very friendly.

7:45 PM: I half-jokingly ask David Nugent if it might be possible to switch to the Edward Munch room. He says no.

8:00 PM: Dinner at a fancy restaurant. I sit next to Oren Moverman, whom I had managed to offend several years earlier. We never spoke about the incident and he was always cordial the few times I ran into him since then. But I couldn’t help feeling bad about what had happened so I decide to bring it up during dinner. We talk about it and I feel better afterwards. I like him a lot and I’m really glad we were able to patch things up.

11:30 PM: I was hoping we could do some work on the script after dinner but we both ate too much and fall asleep.

10:00 PM. Our first session with Lisa Muskat. She suggests we walk to the beach. Hooray!

10:02 AM. Lisa tells us what she considers the main problem with the script – namely the third act. I agree with her.

11:30 AM. We return to the hotel where we all three try to come up with solutions to the problems in the third act but Arnold and I are in disagreement about how to do that and neither of us manages to convince the other. Lisa tries her best to mediate and offer alternate suggestions but fails to broker a truce.

2:00 PM. Our first session with Andrew Bienen. He is probing very deeply into the heart of the script. This is clearly what needs to be done, but it’s also confusing and, for me, a bit disheartening. Using a Rubik’s cube analogy, even though the script wasn’t totally working, it seemed very close but in trying to fix it, everything else went out of whack and now it suddenly seems very far from completion. This is a necessary step in the process but it’s hard not to feel that one is taking several steps back.

5:00 PM. We planned to finally get some work done on the script but we’re both so emotionally and creatively wiped out by our last session that we fall asleep.

8:00 PM. I sit next to Andrew at dinner. He’s worried that he confused us too much. I try to reassure him that we’ll be okay and that all of his notes were really helpful.

11:30 PM. I’m up for working on the script but Arnold isn’t feeling well so we go to sleep instead.

8:45 AM. It’s our last day in the Hamptons. Andrew announces that he has good news. He re-read the script early this morning and thinks he’s figured out a simple solution to our third act problem. I’m touched that he took the time to re-read the script while the two of us slept.

9:15 AM. We take that long-awaited bike ride. We stop at a cemetery where all of the names on the gravestones have been erased by time.

9:45 AM. Arnold and I decide to start working on the script finally. We sit down and figure out a fairly radical restructuring of the story. Actually, Arnold does most of the figuring out.

2:00 PM. Our final session with Andrew. We explain to him the changes we came up with. He likes some of them but not others. Arnold does his best to defend our ideas, to the point that he’s not letting Andrew get a word in edge-wise. I suggest we just listen to Andrew and try to understand what he’s saying before engaging in counter-arguments. Without the chaos of counter-argument, Andrew comes around to most of our ideas. I like the way he thinks about screenplays and I love the way he talks about our script.

4:00 PM. Our session is officially over, but Andrew kindly offers to read our next draft.

4:30 PM. We say goodbye. Oren Moverman and Bill Collage, the two other mentors, both offer to read our script as well.

5:30 PM. On the drive home, we stop at Joseph Cornell’s great-nephew’s house. He shows us the exact spot where a famous photograph of Cornell was taken; it is a photograph I’ve had on my wall for years. He also shows us Cornell’s telescope and stereoscope as well as a discarded Cornell box that his great-aunt rescued from the trash.

7:00 PM. On the way home, we decide to change the title to The Sky is Blue Like an Orange.