How to Create Work Non-Stop Despite the Odds 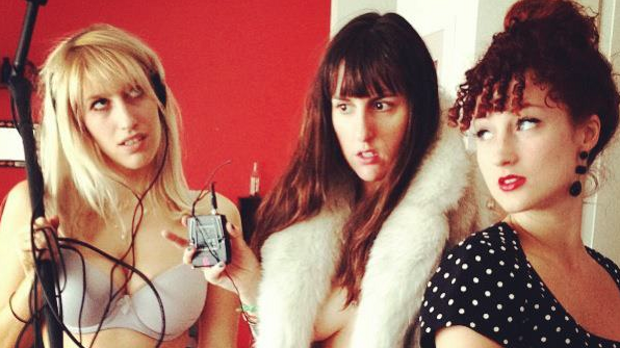 by Natalia Leite and Alexandra Roxo
in Filmmaking, Financing, Production
on Jun 11, 2013

If you are an independent filmmaker who’s not a trust fund kid, most likely you are on that constant search for financing for your next project. As two filmmakers living in New York, attending indie film parties and groups, we are constantly hearing stories about the film that’s been five years in the making and counting… and to be honest, it’s a little depressing. We need more stories about “the little film that could!” to inspire optimism among indie filmmakers instead of the tired “Who’s financing your film?” conversations.

We are no experts, but over the past year of collaborating as a filmmaking duo, we’ve found ways to be constantly making work, not just talking about it. As of late we’ve been meeting with a company about doing post for our feature doc Shooting Serrano and just returned from a four-day test shoot in the middle of New Mexico for a TV doc series we are working on. Our goal is to be making films as much as possible and really earning the title of “filmmaker.”

Our most recent project is a web series called Be Here Now-ish, about two down-and-out New York gals who go to L.A. to have a spiritual awakening. We are currently doing a Kickstarter campaign for it.

We’ve shot this trailer so far with no money, just using our resources and the help of a lot of talented friends. Here’s what’s worked for us so far:

Let’s be real. Filmmaking can be tough. It’s amazing that films get made, period, especially indie films. Getting a feature film made (and not to mention distributed) can be way more complex than finding a life partner or passing the Bar exam. It’s a HUGE accomplishment. It can be a very lonely process too. You get rejected over and over again and have to stand back up and keep moving. So why not find an amazing, talented other filmmaker that you get along with and work well with so that you can share the insane workload and scream obscenities with when you get that bad review?

There are a lot of male duos out there — the Safdie brothers, the Coen brothers, the Neistat brothers, the Duplass brothers. We aren’t brothers or sisters but we are making work as a female filmmaking duo, something you don’t see much of. Working within a partnership is not always rainbow-colored, but it has allowed us to challenge ourselves to take more risks and make things come into fruition more quickly.

OK, yes, we all know filmmaking is a very collaborative process. But who needs a producer, agent, or manager if they are not actually helping move your project forward. There is so much talk in this industry. Stop waiting for other people to tell you when/where/how you should make your project and just get out there and do it. If your producer or agent isn’t getting your work to move then it’s up to you to get it off the ground. It’s actually been up to you all along. They are there to help but you can’t depend on them to make it happen. YOU make it happen. We don’t have an agent or manager (yet!), nor do we have a producer for our web show, but that hasn’t stopped us from making the work we want to see out in the world.

3. STOP PLAYING IT SAFE AND JUST BE YOURSELF

We are looking at the most oversaturated market out there. Anyone can pick up a camera. Everything has been done. So just do YOU. Be the most authentic version of yourself possible. Let your freak flag fly and don’t be shy about it. Looking tentative about the choices you make artistically is not cute. Be bold and stick with it. What do you have to lose? Do you really want six years to go by and be that person still talking about that one film you want to make one day?

The whole “Oh, I make films for people like me” or “I make films for women and men ages 18-55” doesn’t really work. What makes your work different? Special? Worth someone taking time out of their incredibly busy life to watch it and/or support it? Is it you/your brilliant personality? Is it a social issue that touches hearts left and right and has organizations supporting it? Is it because it stars Ryan Gosling? Identify who your audience is and try and make them your friends. You will need them for years to come, and hopefully they will also need you.

6. ASK YOUR COMMUNITY FOR HELP AND BE THANKFUL

Can’t pay people? Why not barter? Our webshow has been a perfect example of what happens when you just ask for help from your community and offer something in exchange. Be it helping other filmmakers on their projects or cooking them a nice dinner or teaching them samba or helping them organize their house. Think of what skills you have to offer and get creative! It’s been an incredibly humbling experience for us to have so many talented people working on this web show with us. And, of course, when the favors run out, you can always do a Kickstarter campaign!