The POV Conversation: Josh Aronson and Adam Larsen on How to Interview 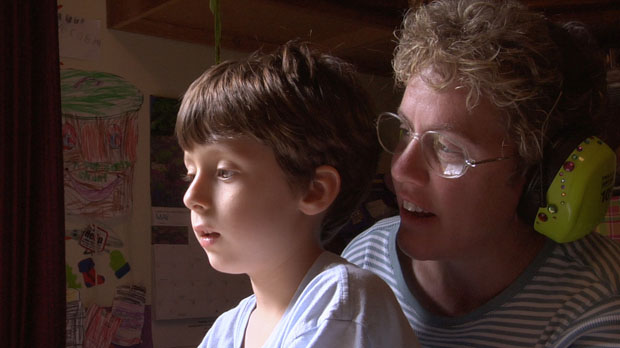 by Filmmaker Staff
in Directors, Filmmaking, Interviews
on Aug 19, 2013

Last year, to celebrate POV’s 25th anniversary, Filmmaker organized a series of conversations between documentary directors whose work had been featured on the PBS non-fiction showcase. Last month we continued this series with a discussion between filmmakers Stephen Maing and Lixin Fan. This week we are featuring a conversation between Adam Larsen, whose first feature length documentary film Neurotypical is currently streaming on the POV website, and Josh Aronson, director of Oscar nominated documentary on deafness Sound and Fury. Here the two compare their different interview techniques.

Aronson: That’s the exciting thing about making vérité films. You have two people sitting in the kitchen making conversation, or two characters sitting on their front porch discussing their marriage; it looks like a narrative film. It has the feeling of dialogue like that because you’ve cut it together very carefully from an hour long conservation into a five-minute scene. It has a flow, if you’ve done a good job and you were lucky with what they talked about, but we sometimes suggest those conversations as vérité documentarians, so the result is an interesting hybrid. It’s not just following people around like the [Frederick] Wiseman school, because you have to sort of prime the pump a little bit. If you have two characters who have difficulty with some issue, sometimes you have to suggest to them a conversation about that issue, and that conversation is cathartic for them. If we’re there with the camera we get very lucky. It’s an exciting process to see it emerge as you described.

Larsen: Absolutely, I agree. And then one has all the other things like sensitivity to families, to being in their world. That’s a challenge. That’s something that I actually tried to be very careful about with each of the participants in the film. It’s something that’s challenging. You have folks that are letting you into their world, their experience, and there are some incredibly uncomfortable things that come up. You try to work with those things and respect the [subjects’] privacy when they need it respected. It’s definitely a challenge. One of the things that I did for the interviews in the film was to make everybody as comfortable as possible so that their stories could shine. I would email the participants questions I was going to ask them ahead of time so that I wasn’t catching them off guard. With autism there’s often sensory challenges, so bright lights and touch sometimes were concerns. I would cater the interview to each individual that I was going to interview, so I would shift the light around or I would tape the microphone to the bottom of the table. It was just working with them so that they could really tell their story the best, and not be overwhelmed by me as the filmmaker. That’s probably one of the benefits of having no budget; it was really just me and my dad at times, so we could have this really nice conversation with them without a film crew.

Aronson: I’m very interested to hear that you say that you sent them questions. That’s something people always ask me about and I never do that, just practically speaking. There’s no right or wrong. I think perhaps with families with autism, or autistic people, nervousness or their projection about what the interview might be could be damaging without the questions in advance. But I’ve always thought I would never give questions because I don’t want them to prepare the answers, I want them to be spontaneous. If they’re nervous about what I’m going to ask them, that it’s something they won’t know, I have this sort of stock phrase I always say: “The only things I’ll ask you about are the stuff you’re an expert on.” But I’ve always been worried that if I gave them the questions beforehand then they’d prepare or over prepare, and it would be such a stock answer. That’s not something that was a problem for you?

Larsen: No, not at all. These folks I’m interviewing with autism, they are thinking a lot about these things and these challenges and fitting into society and they really don’t ever have venues to ever say them. I’m speaking generally now, but the rehearsal of it is actually part of what makes it come out naturally. I definitely know that everybody was much more comfortable when they had the questions ahead of time so that they could give it a good shot, especially for those that are advocates for autism; they really wanted to present the reasons and really wanted to share their stories clearly. One of the people I interviewed, Wolf, talks a bit about his database. When he learned new things and new interactions, he would put it into his database, and he recalls these things and is an incredible speaker. Part of the comfort of him being a part of the documentary was that he knew all the rules. He knew what to expect, and if I threw curves at him I think it would have been problematic because he was not prepared for them and it would have stressed him out.