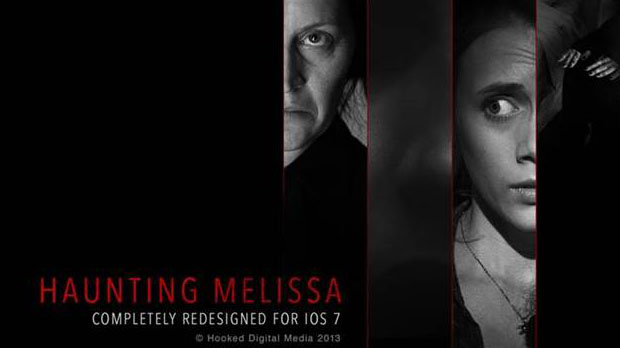 by Randy Astle
in Filmmaking, Interviews, Transmedia
on Oct 30, 2013

As the producer of films like The Ring and Mulholland Drive, Neal Edelstein is no stranger to horror films and thrillers. And with his new project, Haunting Melissa, he’s moved beyond traditional pictures with his first immersive production for iPad and iPhone. Available for free in the App Store, Haunting Melissa centers around the search for a girl who vanished from the farmhouse where her mother had earlier gone insane, but this story is told in a succession of videos released to the viewer in seemingly random bursts. The temporal extension – and unexpected timing – of the narrative through these push notifications brings the story into viewers’ lives over time, while the intimate viewing method of holding the screen and listening through headphones brings it into close physical proximity. Taking these characteristics of the viewing experience into account was one of the prime creative directives of producing Haunting Melissa, as Edelstein explains below.

Filmmaker: What is Haunting Melissa? How would you describe the app?

Edelstein: Haunting Melissa is a ghost story told in a whole new way. The grand idea is really simple . . . get people to put their headphones on and sit in a corner with a device and watch this ghost story and not know when it’s coming at them. As a filmmaker, it’s all about the story and when I first turned on an iPad, I knew that storytelling would never be the same. These powerful devices and software gave me a direct pipeline – a closed network, from storefront to direct distribution, to my audience.

You have to remember that Haunting Melissa is not a movie inside an app – I wanted to reconceive how stories are told by leveraging iOS technology and iOS devices.

Filmmaker: In what way? What could you do with an app that you couldn’t with a linear film or even a web series?

Edelstein: I’m always looking at different ways to tell a story and deliver content. As the Internet took off, I was excited by what was happening, but I couldn’t gravitate to webisodes for a couple of reasons. It’s a little bit uncontrolled and full of distraction. The audience experience with banner ads was a little too much for me. So when these devices came out, it changed everything – I felt that I could tell a story direct to my audience in a completely different way to leverage the architecture, to leverage the device, to leverage the technology. And what does that mean? I wanted to build a sense of uncertainty, and that started with how the story was delivered. Haunting Melissa is basically a ghost story that comes to you in pieces, so it could be Friday night, 20 minutes; Wednesday afternoon, 5 minutes; it could then be Thursday, 20 minutes, again. So the story is evolving and you don’t know when it’s coming at you. The technology enables us to push footage, change footage and mess with the viewer’s mind, heightening the story in a way that hasn’t been done before. We couldn’t have done it without these devices.

Filmmaker: How did you go about determining how, or when, this would happen?

Edelstein: We invented a scheduling system that we monitor and adjust on the fly. We do not want the user to know when the next content comes. There is server-side proprietary software at work based on a number of factors including engagement. It could be 48 hours between a pair of chapters and 16 minutes between the next. Because of the push technology and a robust CMS that we have built we are able to release content and reach viewers instantly. Mobile devices are so personal – we carry them everywhere and we’re always looking at them.

The other thing we do that is pretty powerful and we hold a several patents on is called Dynamic Story Elements (DSE). When you go back and watch, things will change, a ghost that was there before might now be gone. In a nutshell, we’ve invented technology that edits on-the-fly, meaning that what you’ve seen on first viewing may not be what you see the next time. Twists and turns in the story are engineered to create doubt – and for a ghost story that’s a very good thing. We are just scratching the surface of how powerful this technology is and already we’re seeing astounding results from our fans. Expect big things in the future with DSE!

Filmmaker: And it throws scripting into a whole new realm. Can you talk about how the creative process was different than on your traditional linear films? Writing and postproduction in particular were probably significantly different than on a regular movie.

Edelstein: Some things are traditional, but some are very different. We have traditional filmmaking in terms of mounting a production, and capturing and editing an image. This is so different than that. It is a script, but it’s different than a script. It’s a film. It’s a TV show. It’s a book, but it’s new media and we’re creating our own language. We mapped the script, which turned out to be much longer, and the form is slightly different. But really it’s about driving the story forward and keeping our audience engaged. It’s also making sure that we’re utilizing the technology to our advantage, but not making it the most important thing.

As far as post-production, you’re cutting differently and always thinking about ending up on a mobile device with different aspect ratios and screen resolutions. The post-production flow is the same to a point.  You’re still cutting picture, but you’re dealing with outputting to various devices, encode sizes, server distribution – it’s vastly different than finishing a film or TV show. In post-production, the editing flow’s normal, and then you start interjecting iOS developments and server technology – not that that hasn’t ever been done before, but it certainly hasn’t been done in this situation. So that was a huge challenge for everyone on the backside. It just becomes problem solving and inventing, two beautiful challenges. There were certain things that we just didn’t know if we could accomplish, but we figured it out. Over post, we learned how to streamline things and have a more structured approach to creating content that works on a number of levels on mobile, up close. We also have the first ever LUT for iPad and iPhone, which was a massive challenge to get right.

Filmmaker: Were there any other ways in your design process that you had to take the audience – and the handheld device – into consideration?

Edelstein: The experience is certainly different when you are dealing with a screen that’s an arm’s length away or closer. It’s far more personal and in this case amps up the anxiety and suspense. We also encourage viewers to experience Haunting Melissa with headphones on – we’ve done some amazing things with sound design both during the chapters and between chapters that’s pretty unsettling. We love it. There was a lot of work done in post to tweak the atmosphere, again things that you would notice in an up close and personal setting versus a 30-foot high screen. The combination of the iPad and handheld cinematography really complement each other, it’s almost like a window into the scene and again works so well at this distance. It’s a very intimate experience.

Edelstein: You want to give the people the opportunity to go to the usual places and share their experience, theories and excitement. What I don’t want to do is try to manage conversation. I think it’s all about letting the conversation take on its own life. We engage with the social channels on a personal level because it’s a personal experience. One of the ways we’ve incentivized sharing is to reward users for building community. The more they share, the more chapters they can unlock for free.

Filmmaker: Can you say anything about the financing or revenue stream of a project like this? Getting the money together can often be the hardest part, obviously, but were there even more roadblocks working in such a young medium?

Edelstein: As a working producer, I had a number of directions I could go to put together financing for Haunting Melissa. Unexpectedly, the project was funded thanks to an angel investor that I could never convince to invest in movies but believed in the technology and saw the potential of the new platform.

Filmmaker: This is your first interactive property. Have you been able to think about what else you’re going to do moving forward?

Edelstein: Haunting Melissa has been a great success and we continue to see its impact on new audience members daily. We’ve just completely redesigned the Haunting Melissa app for iOS7 and we’re working on the sequel. In addition, there are also other projects in development using our app format in a number of different genres. It’s very exciting and we are seeing the results in real time!