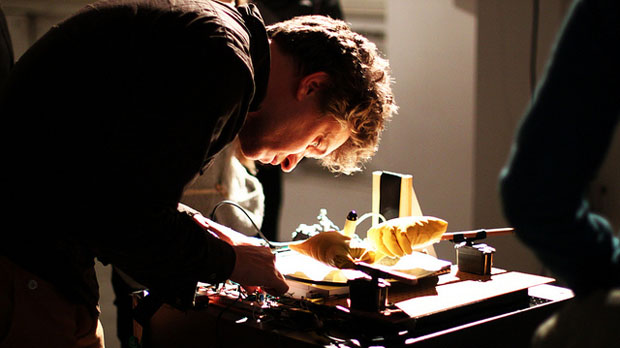 In 1988, VideoFilmFest launched as part of the Berlinale. It gradually evolved until it was rechristened the transmediale in 1998, and today it’s one of the premier festivals for film, art, video, and digital work. Kristoffer Gansing has been the festival’s artistic director since 2011, and for this year’s theme he’s selected the “afterglow,” an exploration of how media technologies and practices are turned into trash. As the festival’s website explains, “As media technologies have now become completely integrated into everyday life, they function similarly to natural resources, producing physical and immaterial waste products that get appropriated in such diverse contexts as e-waste dumps, big data businesses and mass surveillance schemes. transmediale 2014 is interested in this junk, detritus and garbage hovering between the margins and centres of post-digital culture.”

The festival, which will take place between January 29 and February 2, features a hackathon, conference addresses, film and video screenings, digital art, and other work. Gansing spoke with me about this year’s program and the direction transmediale is taking.

Filmmaker: Could you tell me about your background and how you got involved with transmediale?

Gansing: My background is in film and media studies, experimental filmmaking and “new media” artistic practice as well as curating. In the late 1990s, I got more and more engaged by new media and critical net culture as fields where the experimental and DIY spirit of underground filmmaking seemed to be carried further into new, at that time, less commercialized forms. In 2005, I was part of initiating and curating a small festival in Copenhagen, called The Art of the Overhead, entirely devoted to the good old overhead projector. This was meant at the time not only as a tribute to a dying medium but also as an ironic critique of the obsession with the “new” within the media art scene. This festival surprisingly gained a small but devoted cult following and enjoyed particular enthusiastic response from the German media art scene and this lead me to successfully apply for the position at transmediale which I have had since 2011. As a video art festival that has expanded into a broader forum for art and digital culture, transmediale suits my background and interests perfectly.

Filmmaker: transmediale has been around since 1988. That makes it one of the oldest events focused on the intersection of film and digital media.

Gansing: Yes, indeed. That is a bit daunting in this field which is very much dependent on being “cutting edge” but I think transmediale has done quite well in changing and evolving over the years while still keeping the critical approach which lies at the heart of the festival.

Filmmaker: Where did the overall concept for this year’s festival come from? Why focus on the transition of digital technologies into physical refuse?

Gansing: Today it is pretty evident that while digital technologies have brought great changes in economy and cultural production, we cannot any longer disassociate them from the rest of society. One way to make this point obvious is to focus on the particular processes where the supposed immateriality of the digital world is deeply present in the physical, such as the masses of e-waste accumulating in landfills and recycling plants. But with the “afterglow” theme we also go beyond this physical/digital dichotomy and look at how the whole notion of digital culture as a smooth, antiseptic space has become tarnished in a post mass-digitization and post data surveillance world. Recently, artists, researchers and business people alike have used the term “post-digital” to talk about our current society as one in which the digital is integrated almost everywhere and has by that become a mainstream phenomenon. The artistic responses to that have mostly been about a return to analog technologies and practices in photography, film and print making, as more crafty, personal and off the grid.  With afterglow we want to throw in a comment on the notion of “post-digital” and we decided to make this discussion more political through proposing that digital culture is now becoming also a sort of trash culture, not because we are culturally conservative though – we are excited to see what artistic responses can come out of this afterglow moment of the digital, as hovering in between “trash and treasure.”

Filmmaker: Let’s talk about some of the specific events that will be going on. What are you most excited about from the exhibits, performances, and presentations?

Gansing: For 2014, we have significantly altered the logic of our exhibition programme, organizing a hackathon where artists/hackers develop a response to the afterglow on site during the first days of the festival. Overall, we are focusing on new and commissioned works for the festival. An exception would be the screenings programme which follows a curated model and is still a central and also very popular part of transmediale. Among the highlights there is American experimental filmmaker Luther Price presenting both an analogue slide projector performance at our opening as well as a special film screening. Some of the new works we will feature have been developed through residency projects that we have run over the year, such as An Ecosystem of Excess by the Turkish artist Pinar Yoldas. Hers is a “speculative biology” project which will present a large scale installation presenting life as we would know it, granted that it had evolved not from the ancient seas, but from the polluted waters of the current Pacific plastic trash vortex. This project works with trash beyond our current understanding of the environment, presenting us with a radical vision of a future that could be imminent. There is also an extensive conference programme, an important core of reflection of the transmediale festival, where artists, media theorists, and activists come together in panels and debates. Among them we are particularly excited about the conversation between filmmaker Laura Poitras, security activist Jacob Appelbaum and artist Trevor Paglen in an event that engages the current US-German surveillance debates. On a lighter note, Japanese pop singer and researcher Sputniko! will close the festival with a performative keynote lecture and before that we have crammed in A/V performances by Dinos Chapman and Lucky Dragons as well as lectures by diverse contributors such as Metahaven and Douglas Coupland.

Filmmaker: Can you talk a bit more about the specifics of the hack day? How will it relate to the Going Dark project [pictured above] that already took place?

Gansing: I don’t know what will happen! That is the beauty of it… Of course it has an established methodology since this event was running for a couple of years now in different cities, but now in Berlin for the first time. Basically, 70 artists and tech people of various backgrounds will come together for 2 days and create an exhibit following the afterglow theme. We did a similar event with Art Hack Day organized by the Berlin project space LEAP a couple of months ago which was a great success. The “Going Dark” topic of that event was about creating new forms of invisibility, and the follow up at afterglow will be about bringing things to light again but within a new post-digital sensibility. I am expecting playful projects that follow the general Art Hack Day belief in “non-utilitarian beauty through technology and its ability to affect social change for public good.”

Filmmaker:  What have you learned about the direction of transmedia in the years you’ve been involved with it? Where do you think things will be going next?

Gansing: In the recent years, transmedia has become a term for something different and more narrow than what transmediale represents. Nowadays, most people in any kind of media business would identify this word with content spread over several platforms. For me, taking a transmedial approach is not a production or business strategy; instead it is about being able to think and work transversally, across different media as well as cultural contexts. transmediale is unique in the sense that we don´t cater to any one business but try to combine people from digital art, film, contemporary art, design, activism and research. This makes for a demanding programme, but I find that this montage of disciplines is the only way you can respond adequately to the challenges digital or post-digital culture poses to individuals today.