Personalizing Crowdfunding to Get #STUCK in Theaters 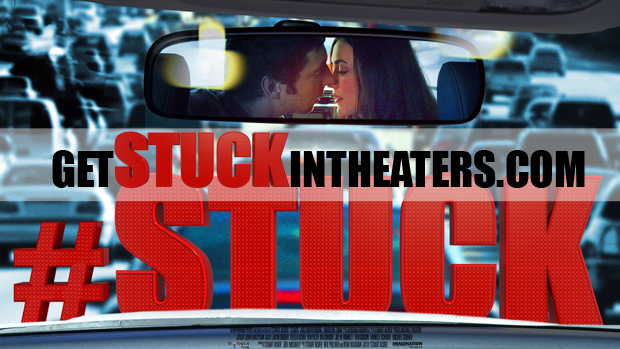 by Stuart Acher
in Distribution, Filmmaking
on Dec 13, 2013

My entire life, all I’ve ever wanted to do was to make movies. After a speedy ten-day shoot, recasting our lead actors 24 hours before principal photography, and the usual financier-disappearing-mid-way-through-the-schedule craziness, my feature debut #STUCK was finally realized… And that was the easy part.

The hardest part was still ahead of me: distribution. Thus was born getSTUCKintheaters.com — #STUCK’s unique crowd-funding website to raise $150,000 for #STUCK’s theatrical and VOD distribution.

Why go on your own? Why not Kickstarter, and the like?

Originally we planned for a more traditional campaign, using an established crowdfunding site. One site actually contacted us — courting us, so to speak — with all sorts of “new” ways to entice “creatives” to give them our business… because it is a business after all. A couple days before we were set to launch, the company reneged on all their promises including banner ad placement, promotions, outreach support, etc. So I figured, why bust my butt and drive traffic to their site if they aren’t going to help us get above the noise? And furthermore, charge us a fee for doing so. Moreover, the “third party payment processor” takes an additional 3% off the raise. So in total around 8-10% fees are taken from my donors, who think they are supporting my cause, solely? That didn’t seem fair. All of it was a reminder of the reason I decided to forgo the traditional studios in the first place, and self distribute #STUCK – so we can do so on our terms, and protect my investors. Plus, I have been down this road before…

In 2006, I raised $50,000 over the Internet through my “Make a Movie Happen Campaign.” Back then, before Facebook or Twitter, there was just a handful of us. Like Save Karyn, the girl who asked everyone to pitch in a few bucks to help support her shopaholic tendencies, or the $1 million homepage, or even the girl who wanted breast implants (I think she actually hit her goal), and my small little make a movie happen idea. Now, there’s an entire crowdfunding industry, comprised of well known platforms such as Kickstarter, Indiegogo, Fund Anything, raking in millions. But times, they are a changin’… again! While filmmakers have relied on crowd-funding via these sites as a means to finance their films, I’ve decided to forgo the traditional platforms and launch my own website getSTUCKintheaters.com to distribute #STUCK.

Which brings us back to that independent filmmaker/start-up philosophy of working smarter not harder. Or was it Uncle Scrooge who said that? Anyway, in order for this “go at it alone” adventure to work, we needed to find a way to save the processing fees. We ended up creating our own merchant account system to further avoid the 3-4% fees usually hidden by the aforementioned for Amazon and Paypal – sorry Elon Musk.

As an “independent” independent, we aren’t dependent on any Kickstarter template for design and function either. So we added a LIVE CHAT function. While browsing getSTUCKintheaters.com, if you have any questions regarding the rewards or where and how the money is used, beyond what is already explained, you can just… ask. Me, in fact. Well, sometimes it’s me. We have members of our #STUCK team standing by with apps on our phones so we can be reached anywhere, at anytime. The coolest part of all of this is that I’ve been able to directly interact with my donors from all around the world. If that’s not social networking, I don’t know what is.

So now that we’ve given the power to people to get #STUCK in theaters… the next question was, WHY?

Today, there are more outlets than ever to distribute a movie. This sounds like a great thing for filmmakers, but every rose has its thorns (yes, the second music analogy). Due to the plethora of outlets for content, the market is grossly over-saturated with films. I want to get #STUCK in theaters to get above that noise — the old day-and-date release independent filmmakers are all too familiar with. It used to be, back in the good old days (and in the distribution world, I’m referring to just six months ago) that you could open a film in New York and Los Angeles, eat the cost, and make it back ten fold on VOD, and DVD (you guys remember… those weird physical disks you used to blow on to avoid skipping). The cable providers have gotten much more stringent on which films they consider for the coveted “ultra” VOD category. That’s the one you want to be in, because it means you get prime placement and advertising/marketing from the cable providers to their subscribers. Now, the new prerequisite for a “theatrical release” is a full one-week run in the TEN major American markets/cities. And that takes money. A heck of a lot more than two screens worth.

So that’s our plan. Since we already have the film completed, I am hoping people can enjoy enough material to want to see #STUCK in theaters. So far, getstuckintheaters.com is 33% funded, having raised over $50,000 in its first week and half — an indication that a good amount of people are behind it. The donations raised will allow us to bring #STUCK to a theater near them, while avoiding inflating the amount needed to be recouped by our investors. All so perhaps I can be lucky enough to make another movie, and subject myself to this torture all over again. Kids, you might want to think about med school.