Sterlin Harjo on This May Be the Last Time 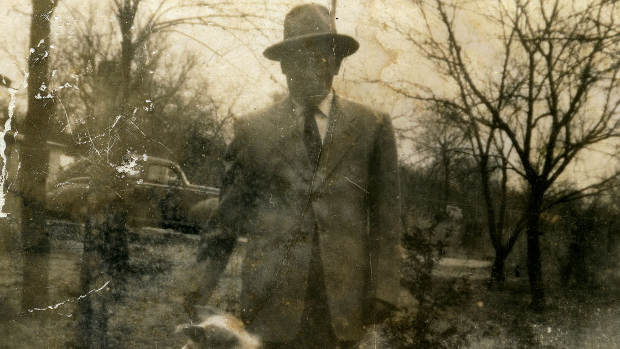 This May Be the Last Time

barking water, Four Sheets to the Wind, Sterlin Harjo, Sundance Film Festival 2014, This May Be the Last Time

Though Sterlin Harjo is a familiar name in Park City – having premiered his narrative features Four Sheets to the Wind and Barking Water at Sundance in 2007 and 2008, and his short Goodnight, Irene in 2005 – this year’s visit marks the director’s documentary feature debut. This May Be the Last Time traces the events behind the never fully explained disappearance of the filmmaker’s grandfather in 1962, alongside the history of the Muscogee (Creek) hymns the Seminole community sang as it set out to find him. Filmmaker spoke with the Sundance vet about his very personal take on ethnomusicology prior to the film’s screening in the Documentary Premieres section.

Filmmaker: Can you talk a bit about the genesis of the film? Why tackle this subject as your first documentary as opposed to, say, incorporating the material into another narrative work?

Harjo: I’ve always wanted to make a film about these songs. I never knew how to approach it. I guess the genesis was just growing up around them. I have an affection for them, but the key to the story was meeting Hugh Foley. He was showing my film Barking Water to students at Rogers State University in Oklahoma. He asked me to come speak, so I did. We were outside talking, and he said he really liked that I incorporated these Muscogee (Creek) songs into my films. I explained that by using them in my films, I felt like they were being kept alive.

Then he started talking about his favorite song. He started singing a Creek hymn. Here’s a redheaded white man singing these Indian songs that I grew up with – I’m sure my jaw hit the floor! I asked him how he knew them, and he told me his story of how he was adopted into a church by marriage, but then he began telling me about his music history background and how he had discovered some of the history of these songs and where they came from. That was fascinating. I knew these songs as a cultural norm. I grew up hearing them. They only exist in a small area in Oklahoma, and here was this non-Indian man telling me this fascinating history about where they come from. It added a layer to the story of these songs – a layer that I needed to tell a story.

Filmmaker: Do you find yourself pigeonholed as a “Native American” director as opposed to just another indie filmmaker? If so, what are the positives and negatives of such labeling?

Harjo: I don’t find myself pigeonholed. I’ve just always done what I do. I keep working. I don’t have a lot of time to analyze myself or my career. I’ve seen other filmmakers come on the scene and have an easier time getting work. Agents don’t really approach me, but I probably wouldn’t approach me either. “There’s this guy basically holed up in a shack in Oklahoma making films about people that make up less than one percent of the population.” Doesn’t exactly scream “moneymaker,” I guess.

I’m not opposed to making money – I would love to direct TV or something – but as of now I direct my own material. The scripts I write are about the world I know – that happens to be a world where Native people exist. Native people aren’t on the national radar in America, and Native film isn’t really on the film industry’s radar. I’m sure they think we are hard to work with and fucking crazy. I kind of like it, though. It’s a funny place to be – on the outskirts of the outskirts. It’s beautiful.

We tell the most unique stories anyway. We aren’t laughing to the bank, but we are original. In this industry if you aren’t moving you’ll turn to stone, so I try and keep things going. I’m constantly working, I’m constantly writing. When I’m not working on features I’m working on Internet videos. I’m a founding member of the Internet comedy group the 1491s. We keep busy by making videos and touring the U.S. and Canada. Making Indians laugh for free. It’s truly punk rock.

Filmmaker: This is your fourth film at Sundance – and you’ve had a long history developing projects with the Sundance Institute – so you’ve been able to witness firsthand how the whole entity has evolved over the years. What are some of the biggest changes (for better or worse) that you’ve noticed?

Harjo: Sundance is always the best. It made me who I am. I listened to Bird Runningwater speak at the University of Oklahoma where I was a student. He spoke about the Sundance labs. I approached him after and told him I wanted to make films. He was like, “O.K. Let’s do it.” That was it. He believed in me and I went for it.

When I found out I got into the Sundance labs I was roofing a house with two biker guys in Seminole, Oklahoma. (They were brothers and they kept getting my name wrong. They called me “Spence.”) I had to borrow my dad’s cell phone because I didn’t have one. It was lunch, and in the middle of my sandwich I got a call from Michelle Satter and Lynn Auerbach telling me I got into the Writers Lab. That was a really happy moment. A highly respected organization liked my work. They read a script I wrote and invited me to be a part of their world. I didn’t even know what a first AD or script supervisor was at the time, but I felt validated.

Since then I’ve made films the way I want to make them, about the people I want to make them about. My films have fought kicking and screaming to the screen, but they’ve made it. I just hope to tell the truth in my work. Sometimes when you get your ass kicked you wonder what the hell you’re doing, but I always seem to get back up and do it again. I feel truly blessed.

Filmmaker: What challenges did you face creating a documentary that your narrative skills may not have prepared you for? And alternately, where did your familiarity with fiction filmmaking serve you well?

Harjo: I found it to be a pretty easy transition. My background in writing really helped shape the documentary. It was a relatively short shoot for a documentary. We shot for about five months. Writing was key. Matt Leach, my producer and editor, and I talked at length about the structure of the film before we began shooting. Making a documentary is a lot like making a narrative film. You are still pulling performances out of people, or at least setting up the atmosphere so that the performance can come out on its own.

Filmmaker: Your prior films have screened both nationally and internationally, and yet you’ve always been based in Oklahoma. Is there a strong indie film scene in Tulsa? What keeps you there?

Harjo: There’s not a large indie scene there. It’s growing, but it’s not a large scene at all. I love Oklahoma. I actually have lived in my hometown since I started shooting this film. It’s called Holdenville. Population 5000. It’s laidback, I go hunting with my dad. I even grinded my own ground venison this year – with a manual grinder! These are things that I can’t do in a lot of other places. I also have an amazing 13-year-old daughter. That’s the main reason why I’ve stayed in Oklahoma. In the end that’s what matters. I have a deep connection with my tribes that I belong to as well.

After Sundance I’ll be a bit homeless. In March I’m shooting another feature that I wrote. It takes place in Tulsa. I’ve thought a lot about leaving lately. It would be nice to try and make a good living at this. I’ll say that I’ve gotten a few eye-rolls when I tell people in New York or L.A. that I live here, but what can you do? It’s an interesting place. I’ve lived in New York before, I’ve lived in Portland. I love Oregon. I think I could do L.A. Colorado has some things going for it at the moment. Maybe it’s time. This feels like therapy!