The Long and the Short of the Cinema Eye Honors 2014 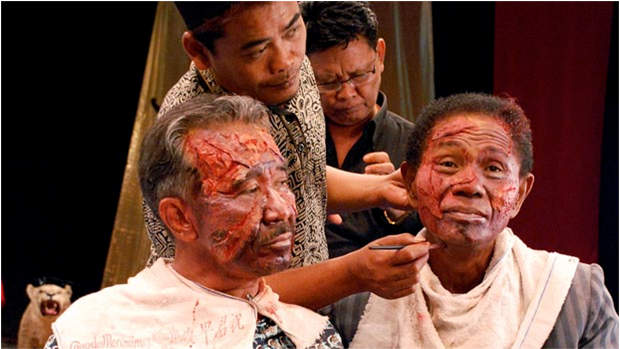 The Cinema Eye Honors is always one of the most enjoyable and lively awards shows of the year, and arguably the most intimate; at no other awards show is there such a sense of an entire community coming together. This year, the short film that prefaced the awards — which was compromised of pictures of all the nominees — ended with the words, “We are Cinema Eye. We are on each other’s team.” And that sense of unity and people pulling together was underlined in the opening words of AJ Schnack, who called on the filmmakers present to stand together and strengthen ties and look after their craft, referencing Laura Poitras, “a friend who’s not able to practice her craft in her own country.”

Schnack also mentioned in his initial remarks the humble beginnings of Cinema Eye and how much it has grown in the past seven years. I might suggest that it has grown a little bit too much, at least in terms of its running time and the number of awards. This year’s ceremony had a scheduled start time of 8pm, and it was past 11:30pm when it finally finished. Joshua Oppenheimer’s The Act of Killing unsurprisingly took the final award, Best Feature, but I doubt that anyone still present to see it could remember who won the first award of the night. (It was for Best Debut and went to Zachary Heinzerling’s charming Cutie and the Boxer, which took home three awards.) When Rachel Grady and Heidi Ewing came on stage to hand out the final two statuettes, they mentioned that they had been asked (like all the presenters) to be funny and charming, and quipped, “We’ve been here for four hours, so nothing we’ll say is funny…”

Coming home last night, on the subway platform I chatted with a guy who’d just seen The Wolf of Wall Street, which has a running time which was dwarfed by this year’s Cinema Eye Honors. But if I (and many others) found it difficult not to gripe about the length of the show, it was because it had so much to offer — including a presenting stint from Thelma Schoonmaker, the editor of the aforementioned film. There were substantial speeches from doc titans Michael Moore (including a great story about a coked up George W. Bush laughing through a 1989 Camp David screening of Roger & Me), Albert Maysles (who talked about filming The Grateful Dead on LSD) and Barbara Kopple (there to receive an honorary award for Harlan County, USA). There were musical numbers: Gasland‘s Josh Fox (who picked up the Hell Yeah award) and They Might Be Giants’ John Flansburgh playing banjos and singing “Which Side Are You On?” from Harlan County, USA, and Lisa Fischer, one of the backup singers from 20 Feet From Stardom, performing Peggy Lee’s “Fever.” Even those not present made a memorable impact: Dave Grohl, whose Sound City won the Audience Award, hilariously expressed his joy at winning by disco dancing to Abba’s “Dancing Queen,” while Carlos Reygadas — winner of the Filmmaker-sponsored Heterodox award — ended his acceptance speech (read by the magazine’s own Scott Macaulay) by noting that he “could not be there tonight because I hear it is very cold in the United States.” The lives and achievements of two other absent friends, the late documentarians Les Blank and Peter Wintonick were also honored last night.

And then there were the awards: 15 in all, plus a new non-competitive section, The Unforgettables, to note the great characters the past 12 months of nonfiction filmmaking had spotlighted. (Also new was the award for best TV doc.) The award categories recognize a wide spectrum of figures within the doc realm, from graphic designers/animators to editors to composers to producers, and rightly honor those who are otherwise ignored during awards season. The Cinema Eyes do not aim to have too much weight or influence on awards season momentum, but arguably the winners of its final two awards cannot but be helped by their successes. Sarah Polley’s win in the Best Director category for Stories We Tell bolsters the idea of that film being a serious Oscar contender, though it still looks as though Joshua Oppenheimer’s The Act of Killing which, as stated above, won the top prize tonight, will continue to be an awards season juggernaut.

In his gracious acceptance speech, Oppenheimer paid tribute to his anonymous Indonesian crew “who gave eight years of their lives for this film,” despite knowing their work would be uncredited unless there was significant political change in their home country. And he also singled out for thanks all of his Danish collaborators, many of whom were present, including his editor, Niels Pagh Andersen, who has been teaching Oppenheimer, who recently relocated to Denmark, a sentence a day in Danish. To convey their working relationship, he revealed that one of Andersen’s instructional sentences was the following:  “Even if the director and the editor feel less than a drug-addicted prostitute giving a blow job, they believe the film will be good.”

From the press release, here is the complete list of Cinema Eye Honors winners for 2014: