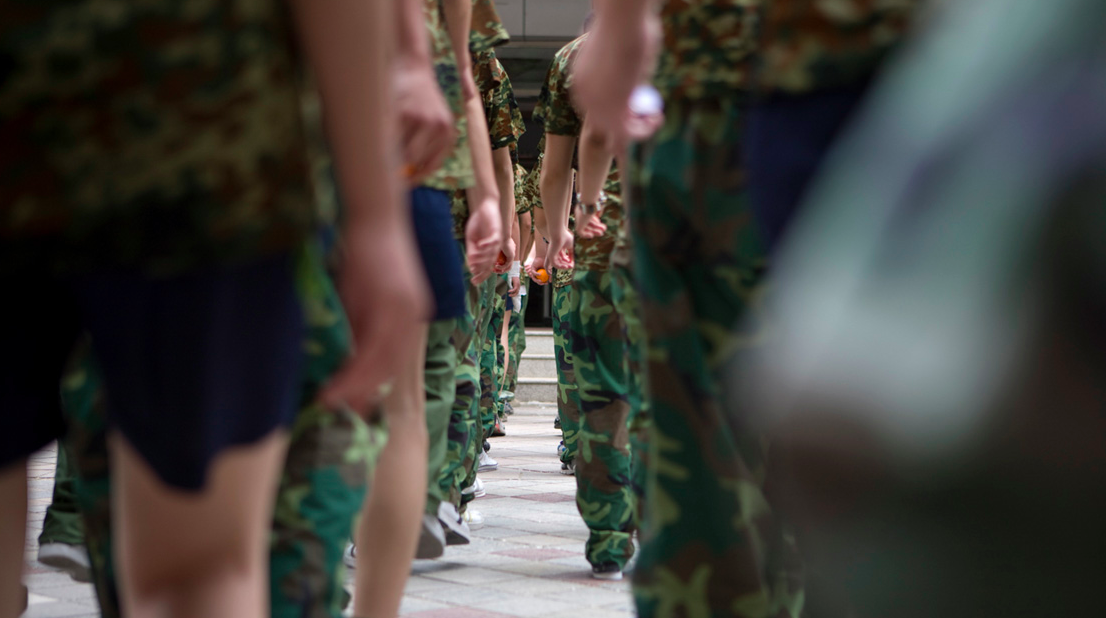 Medalia: As boundaries between reality and the virtual become increasingly blurred, we are beginning to see how reality is compromised and people are losing their footing. When Shosh [Shlam, the other director of Web Junkie] told me about this story of China’s attempt to stem internet addiction among its youth, I was immediately captivated and felt that this it expressed a current and increasingly global dilemma. I began to wonder if I myself was an addict? Had I become overly dependent on technology? And would these techniques to break the addiction among China’s youth prove to be successful? Could this method of using military style training to treat addiction treatment be effective? Was it possible to ‘cure’ these young kids? Was the internet an addiction on the par of drugs. Also like many others, I was very interested in learning about China and finding out why they chose to approach this issue of internet addiction so seriously and in such a way. All these reasons convinced me to go on this journey.

Medalia: Both Shosh Shlam and I, the directors/producers of the film, are women. Neta Zwebner Zaibert the producer of the film is also female as well as our editor, Enat Sidi. Beyond that, the only other female crew members were our “fixer” in China; and in NY, our production manager and some of our interns.

Medalia: One of the challenges making documentaries is fundraising. Because the Center is located on a military base, Westerners are not allowed access. Despite the agreement of Prof Tao Ran, the head of the Center, we weren’t sure we could actually complete the shooting so we didn’t start looking for funds until we had finished the majority of the shooting.

We received funding from YES (the Israeli broadcaster), New Israeli Fund for cinema and TV, Impact Partners, and NYSCA. Chicken and Egg, a fund for women directors, gave us a grant.

From the very beginning, author and activist Eve Ensler has been a big supporter of our film. She is a huge supporter of women directors and projects that address women’s issues. Morgan Spurlock and Jeremy Chilinick also came on board to offer their support for and they have been enormously supportive of the documentary community in general.

Generally, I believe fundraising for documentary films is very challenging regardless of gender. But it is always easier when there is a strong story.

Medalia: I am sure a male director would handle the film differently. The fact that both Shosh and I are women and Enat our editor is also a woman, gave the film a sensitive touch and perhaps encouraged us to focus on the relationships within the family.

Medalia: I do think that throughout my career there are some women who especially helped me and guided me.

Medalia: We are now working hard on getting Web Junkie out in the world. Also in April, Dancing in Jaffa will be released theatrically in the United States. And I am in very early stages of developing a new film but it is too early to know what exactly it will be.

Filmmaker: Considering this will be released at Sundance: A) What do you hope to gain from being at the festival?