Interview with To Be Takei Director Jennifer M. Kroot 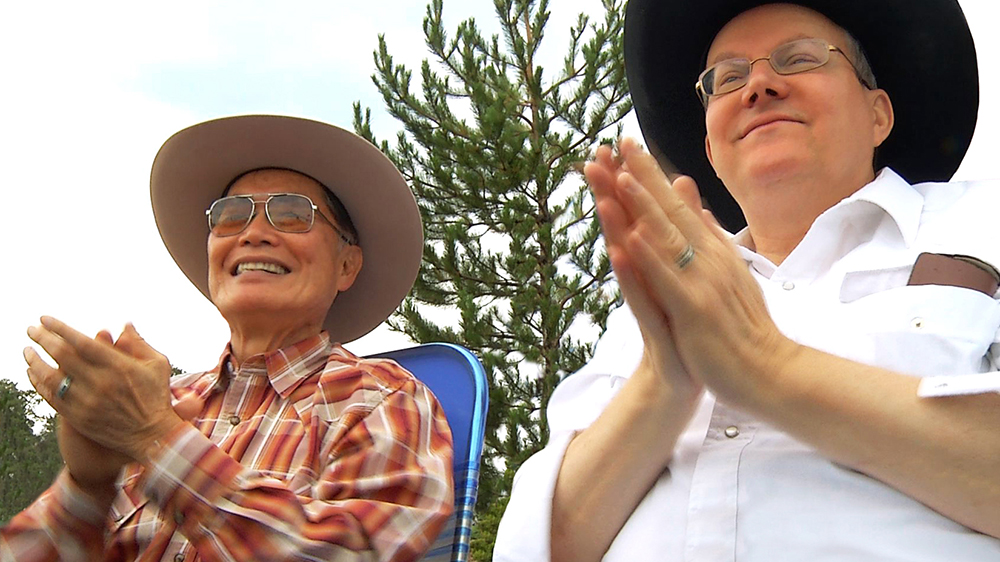 Kroot: I was compelled to do it! I have always been a big fan of the original Star Trek, which I loved for its mix of campy aesthetics and also its thinly veiled exploration of the serious social and political issues of the 1960’s. George Takei’s sexual orientation never occurred to me but I was very impressed when he “came out” at age 68 in 2005 to become a voice for LGBT civil rights and then marry his long time partner, Brad Altman. I noticed how George’s philosophy was similar to Star Trek philosophy and I found that intriguing. I immediately fell in love with George’s style of activism when I heard him on news interviews. He’s smart, funny and has the unique ability to bridge the gap from the politically correct to the incorrect. I believe this is why he’s become such a beloved figure in our culture. He’s sort of a cross between John Waters and Mr. Rogers. I read his autobiography about being imprisoned in Japanese American internment camps when he was a child and I saw the parallel with the discrimination he faces today as a gay man. With so many polarizing forces in politics and the media, it’s wonderful to see an iconic actor use his fame to educate people with humor and grace about the obstacles that he has faced. Another thing, when I met George I noticed how tight he is with his husband Brad and how their dynamics are almost archetypal to relationships and I also admired this. All of these complex aspects about George Takei made me want to see a documentary about him, and since there wasn’t one, I had to make one.

Kroot: My crew was very small, usually just me, a cinematographer and a sound recordist. My main cinematographer (Chris Million) is male. Chris shot my previous film (It Came From Kuchar) and I knew that we worked well together. We did frequently work with a female sound recordist named Jenny “Blue” Heimbach. She’s excellent. Film shoots often came up suddenly and I didn’t always have a lot of time to look for crew members, and the majority of referrals I got were for men, so I mostly worked with men. The vast majority of people who do these two jobs are men. I wouldn’t hire someone just based on gender, but I always like to be supportive of women in these fields when they are recommended to me and are available.

Kroot: I think that fundraising is challenging for everyone these days. I definitely found it tough, but I don’t think that was because I am a woman. The groups that supported this film the most were LGBT foundations, individuals interested in LGBT civil rights and also people interested in the story of the Japanese American internment. I didn’t get any funding from foundations that traditionally support female filmmakers, which might be because my subject is a man.

Kroot: I know that I’m the best filmmaker to tell this story, but not specifically because of my gender. When I met George and his husband Brad, we definitely had a comfortable connection early on. Perhaps since women are supposed to be more socially competent I was able to connect, but I’m not entirely sure. I also happen to be very patient and diplomatic, which sound like they could be stereotypical adjectives to describe women, but I hate to stereotype, so it’s hard to speculate.

My editor/co-director is male (Bill Weber). Bill and I worked very well together to figure out the story of the film while editing for about eight months. I think Bill has some traits that might be considered more stereotypical of women, like being open to his emotions. He brought a lot of warmth to forming the scenes about the relationship between George and his husband Brad in the film. I tend to be interested in comic timing and awkward moments in the film. I’m also a science fiction fan and brought knowledge about that to the project. I’m just trying to show that we don’t have to be defined by our gender roles.

Kroot: I think that people sometimes underestimate me because I’m a woman, which is great because I don’t have the added pressure of people’s expectations. I don’t think that some of my male peers realize how quietly aggressive and competitive I can be. All of this is to my advantage. On the other hand, I know many men in film who have been very supportive and encouraging of my career.

I certainly have felt some gender-based discrimination at times. At film events people often assume that I’m an actress, rather than a filmmaker. A few times when I screened my previous documentary, It Came From Kuchar, people mistook me for the subject’s girlfriend (even though the subject of the film was a gay man). It was a little humiliating, but funny.  I doubt that anyone will mistake me for George Takei’s girlfriend!

Kroot: I wish I had directed and rewritten the latest Star Trek. I really miss the socially aware themes of all of the other previous incarnations of Star Trek. Of course I would have given George Takei a starring role too.

Kroot: I am in the early stages of a hybrid narrative/documentary that focusses on a real but exaggerated sordid Hollywood tale of the 1960s and 1970s. There’s much more to it, but I don’t want to jinx it by saying too much at this early stage.

I’ve always wanted to created a version of Lord of the Flies with socialites instead of schoolboys. That would be a narrative, not a documentary.

Kroot: It’s a dream come true to be invited to premiere To Be Takei at Sundance. I hope this brings a lot of attention to the film. And I’d love to meet Albert Maysles. I’m a Grey Gardens fan, and I love the cinema vérité style of the film. I’d love to chat with him about what made those characters transcend pop culture.

Kroot: “Why do you keep making documentaries about gay, older gentlemen named George?”

It’s really just a bizarre coincidence and I don’t plan to make a third.