Natalia Leite and Alexandra Roxo on VICE’s Every Woman 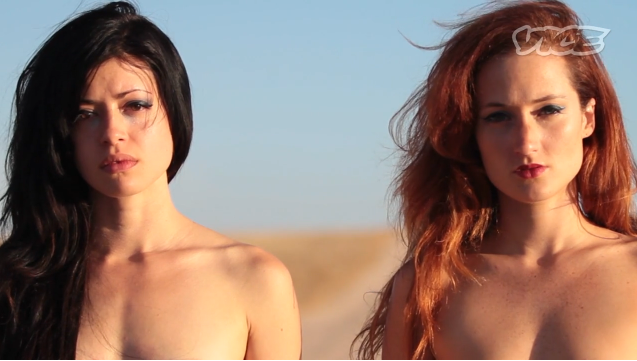 Leite and Roxo in Every Woman

by Sarah Salovaara
in Directors, Filmmaking
on Jan 31, 2014

More often than not, filmmakers undertake the odd job to get by — not unlike, as Natalia Leite and Alexandra Roxo argue in their VICE series Every Woman, the storied “second sex.” “We started thinking about the most stigmatized, mysterious and hardest jobs women do,” Roxo narrates in the opening sequence. And so, the Brooklyn filmmaking team trekked across the country to slip inside the well-worn shoes (lucite heels) of a truckstop stripper, as captured in the New Mexico-set pilot of Every Woman. Filmmaker spoke with Leite and Roxo about the series, the dangers of overstepping exploitative bounds and the foibles of simultaneously acting as your own cast and crew. Future episodes are currently in development, and you can track the duo’s Facebook page for updates.

Filmmaker: How did the idea for the show come together? It seems like the series plays along the lines of “The Simple Life,” which, for me, is a wonderful thing.

Natalia Leite: I stumbled upon this club while scouting for my first feature film Bare, which will be shooting there this summer. We both quit our full-time jobs last year and after a few months in LA where we were writing our web show Be Here Nowish, which will be premiering this spring, we found ourselves needing to find better paying part-time jobs so that we could continue putting time into the writing and filming the web show (for free!) We were brainstorming ways to make money quick and I mentioned stripping, just as a joke initially, ’cause I could never see myself being able to actually do that job… Well, until now. But then we both started thinking that this could be a really interesting experience to document.

Alexandra Roxo: It started as just an idea to go to this one location but then it evolved as we started thinking about all kinds of different women’s jobs and roles and if we could show them through our artistic vision, put ourselves on the line to demonstrate that, then perhaps it would be interesting and would show a different glimpse into what it’s like to do this type of work, rather than just making a straight up doc about these women as an outsider. We wanted to immerse ourselves in the experience and see for ourselves what it would be like, so that our conversations with the women could be more of a dialogue. We weren’t interested in taking a straight doc approach, but involving some staging, some performance, and some more experimental work.  The piece that went online with Vice is a compromise of those things.  Our first cut was way more experimental and out there.

Filmmaker: In trying on the shoes of these different women, who participate in dour lines of work, how did you steer clear of seeming fetishistic or exploitative in someway? Was that a concern?

Leite and Roxo: It was and is a concern for us.  We have and our friends have, done difficult and controversial types of work to get by and understand that it is a sensitive subject. We didn’t want to lie to people ever or do anything harmful to people.  We weren’t interested in making a Borat type of piece but just being ourselves. Since we are characters in the piece, we are essentially guiding the story at times. But, for instance, when we were chatting outside the club with truckers we were never attempting to make fun of them, just engage and listen. People were very open and willing to talk to us on camera. It probably helped that they saw that we were the ones filming with 5Ds. We were the crew and we were also the dancers. I think if we were just standing on the sidelines documenting and saying “Look at these people!” it could be perceived as exploitative. So we threw ourselves in there and were willing to do what it took to really live there and try the job and show what it felt like in a very intimate way. It was really hard, as it is for any of the girls.

Filmmaker: In the first episode, there is an emphasis placed on how little the women earn — they’re forced to pay out the bartender, the DJ, men who observe the scene from the comfort of a removed perspective. But you also spend a fair bit of time with the truckers, portraying a few (especially the blind man) with a degree of empathy. How did you balance these two narratives?

Leite and Roxo: It was hard to balance those two narratives.  I think at times we had to ask ourselves, wait who is this about? The girls? Us? The truckers? In the edit we realized that all those perspectives needed to be there to really show what it’s like to do that line of work, even though we are the ones driving the story. For the pilot, we were exploring. Also we didn’t meet the girls one on one until we were there for five or six days. Before that we were thinking, “Wow, shit, what if we don’t get to get to know these girls? We don’t want this to be just about us.” Naturally it took some time to build their trust. But in the end the girls really opened up to us and became our friends during that time.

Filmmaker: From a purely technical perspective, how are you juggling the wide cast of characters with a documentary approach? There so many people that come and go, presumably you can’t stop and mic them all, etc. How did that work?

Leite and Roxo: We shot the piece ourselves on two 5D cameras. It was hard technically at times. I mean, we’d have heels on, be half naked and carrying a tripod and gear. It was a comical sight I’m sure. Primarily we were both miced and would mic people we would interview one on one but use the shotgun mic when we had to.  It was important to us that the piece was told in our visual style and we felt we had to shoot it ourselves to achieve that.  That being said, we are going to try and hire a PA for the next one who can help us manage the gear and the media. Doing media management after a long night of stripping is a terrible idea.

Filmmaker: You conclude the first episode with the notion that people should relinquish judgements about these women’s line of work, but regardless of judgements, what about the women themselves? Is there anything to be done to improve their working conditions?

Leite and Roxo: Honestly it’s not easy for them. But they are choosing to work there. For some of these girls the choice might be between making minimum wage at McDonald’s or working at Club 203 [the strip club.] Regardless of their situation, it is a choice. At the 203, the club owner is a good guy who seems concerned about making his establishment a safe place for these girls. We have stayed friends with Daisy, one of the girls in the piece, and she just had a really scary experience and had to quit dancing. That’s the reality of the situation. Some of the customers are amazing and some aren’t.