Freezing Filmgoing in Tromsø and the Phenomenon of Site-Specific Cinema 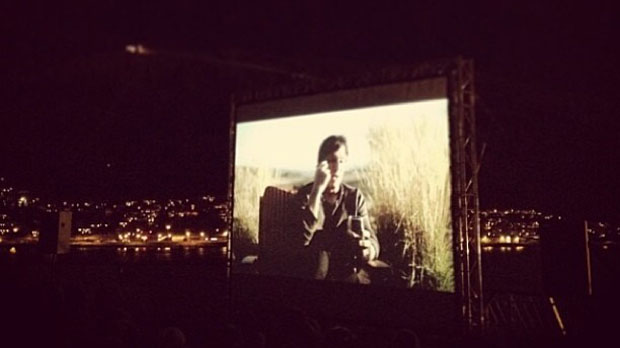 There's Always Next Season at the Tromsø International Film Festival

by Kaleem Aftab
in Distribution, Festivals & Events, Filmmaking
on Feb 5, 2014

The Tromsø International Film Festival has always pushed the boundary when it comes to open-air cinema. The only international film festival that takes place in the Arctic Circle has a Winter Cinema, an open-air cinema with sofas positioned on top of the snow in front of a large screen with picturesque hilltops on the horizon. Most of the program is made up of short films made for children that play in the dark afternoons, but this year Festival Director Martha Otto put on a late-night screening of Dead Snow to boot. It added a new challenge for the audience, to stay and watch Tommy Wirkola’s cult classic without getting frozen to death and becoming a Nazi zombie. Yet for the organizers of the festival, it seemed a cinema in the snow was not cold enough for the local hardy souls.

When the organizers of the festival announce that they are putting on an immersive cinema event in extreme conditions, the wise thing to do is run into an igloo and hide under a very large polar bear. Alas, who wants to be wise in the movie business? It’s 10°F and I find myself on top of a boat at midnight watching a preview of There’s Always Next Season, a homage to ‘90s snowboard movies directed by Tromsø natives Lein Størmer and Carl Christian. The film chronicles a group of young men inspired to take up snowboarding by films they are watching on DVD, which led to the rise of the snowboard scene in northern Norway. The title does seem like something of a poisoned chalice as every January like clockwork at the Tromsø Film Festival comes the announcement that the film will be delayed for another year.

The screening contained enticing clips of snowboarding action mixed with interviews with snowboard filmmaking legends. The filmmakers also used the event to announce a crowdfunding campaign trying to raise the $45,000 they need to finish the film.

But the reason most people attended the screening was to sample what Otto called “Extreme Cinema in Extreme Locations.” The conditions were definitely extreme. Taking off your gloves for more than 30 seconds to take a photograph was the equivalent to making a date with Mister Frostbite. Unfortunately for my poor hands, taking out a camera was exactly what I wanted to do, as the final Friday of the festival at exactly midnight was when the Northern Lights decided to make an appearance in the night sky. In a way, the location on top deck of the Hurtigruten ferry was probably the best place in town to see the aurora borealis.

It was so cold that everyone had heavily feathered winter gear on. Yet despite the atrocious conditions (okay, a snow storm would have made it worse), the screening sold out. It offered further proof that audiences will come, given the right offering in the right circumstances. 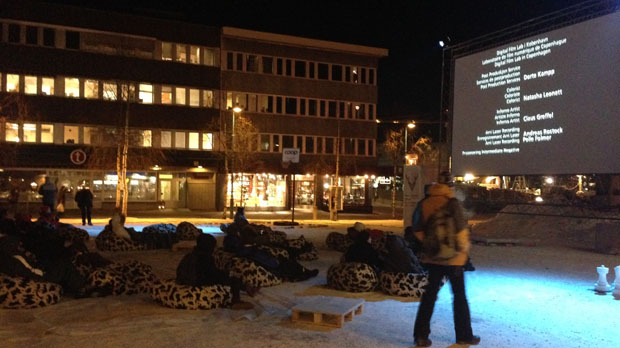 A 3pm outdoor screening at the Tromsø International Film Festival

For a long time there have been lamentations about the death of the drive-in cinema. April Wright even made a case for the drive-in in the documentary Going Attractions: The Definitive Story of the American Drive-In Movie. I must admit that I’ve never really gotten the hysteria caused by watching a movie in a car. As anyone who has ever shot a still from a camera would know that when you take a picture through glass, the quality of an image will suffer. And how many people have surround sound in their car to get the most out of the movie as they tune in to the correct frequency. It’s always seemed to me to be a celebration of a cinema where the product is diminished rather than enhanced.

Much more suited to my taste is the phenomenon of site-specific cinema. It’s a massive business in the U.K. and, when executed well, immersive cinema is so good that I find it surprising that it’s not had the same success in the United States.

In the U.K., the biggest game in town is Future Cinema. Headed up by Fabien Rigall, their big events are Secret Cinema: screenings that change venues and keep audiences guessing as to the film they are seeing right up until the screening. I’ve been to several of the shows and been put on a penicillin run in an underground tunnel at a screening of The Battle of Algiers; climbed into space props donated by Ridley Scott at a screening of Prometheus; and put in prison clothes and driven in a prison van as part of an elaborate set-up for The Shawshank Redemption. The level of detail in the shows is why users are willing to part with $75 to watch movies that are already in their DVD collection. The runs are so successful that they often sell out for weeks in advance.

In Toronto the company leading the way are 360. Smaller in scale to Future Cinema, 360 have so far produced events lasting only one or two nights. The emphasis is placed on theatrical set-pieces such as the hand-to-hand combat staged for Fight Club screenings. Run by Ned Loach and Robert Gontier, they were inspired by the immersive cinema screening they saw on show in London.

One of the reasons there are so few companies working on immersive cinema is that the costs are prohibitive. 360 admits that it has yet to turn a profit. This might explain why there has yet to be a company to dominate the immersive cinema scene Stateside.

New York’s PS1 and other museums have put on some limited site-specific events. Andy Warhol used to host The Exploding Plastic Inevitable, which had its origins as a January 1966 dinner at the New York Society for Clinical Psychiatry which featured the first performance of Nico with the Velvet Underground. A series of performances followed, which showcased Warhol’s films and the dancing of Gerard Malanga, Edie Sedgwick and others. The Exploding Plastic Inevitable toured around the States but suffered from poor audiences, police interventions and the suicide of a lighting designer.

It’s a shame, because having sampled IMAX, 3D, Screen X, 8K, none of these technological innovations can compete with the human innovation that goes into a great site-specific screening. That’s true, even when the temperatures are only suitable for polar bears.