How to Crowdsource a Film: Chris Jones on the Omnibus Movie, 50 Kisses 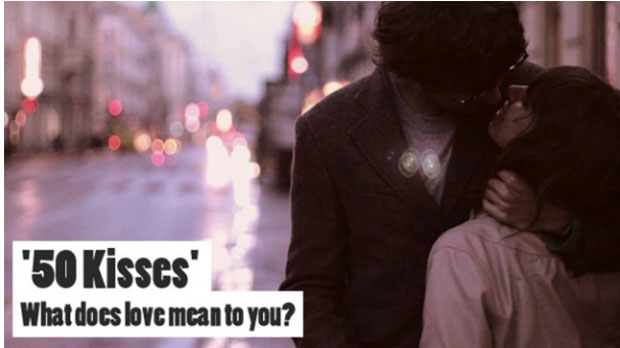 by Randy Astle
in Directors, Filmmaking, Interviews, Production
on Mar 11, 2014

The Internet and digital filmmaking tools have opened up new possibilities of crowdsourcing material–Life in a Day, Declaration of Interdependence, One Day on Earth, even the interactive Star Wars Uncut–and given new life to the omnibus/anthology film format. The latest project to adopt the form is 50 Kisses, a film created by the London-based Chris Jones and hundreds of collaborators from around the world.

The film, which includes 50 scenes built around a Valentine’s Day and a kiss, premiered on February 13–the day before Valentine’s–at the Genesis Cinema in London’s East End. Further distribution is now rolling out. Jones, a filmmaker and author, talked with me about how hard it is to pull off a film this way.

Filmmaker: What is 50 Kisses?

Jones: 50 Kisses was an initiative created by the London Screenwriters’ Festival to connect emerging screenwriting talent with emerging filmmaking talent. As I’d written a number of books in the Guerrilla Filmmaker’s Handbook series, and because of my involvement with the London Screenwriters’ Festival, I’d noticed that there was a disconnect between both groups of people. Writers were often not getting their work produced… which is so critical to their development as a professional. Also, filmmakers were not really working with writers simply because they didn’t meet them. We thought this would be a great way to connect the two groups of people, by launching this challenge to writers to submit a two-page script, set on Valentine’s Day and featuring a kiss. The best 50 scripts would be released on the Internet so any filmmaking team in the world could make a version of that script, and we would select the best films and connect those films together to make a feature film. And that’s what 50 Kisses is: it’s a crowd-funded, crowd-sourced, crowd-created, crowd-distributed, crowd-written, crowd-everything-ed narrative feature film, set on Valentine’s Day and featuring a kiss in each story.

Filmmaker: How did the idea build out of your previous work?

Jones: Every other film I’ve made has been a project that I’ve helmed insomuch as I’ve written, produced, or directed and this was a big departure for me because it was much more of a creative management project. And I have to say, getting hundreds of filmmakers to do the same thing at the same time is like herding cats. So it was very, very different, but I think it’s also reflective of the world and environment which we are living into. We’re living into a much more connected world, where much greater power, creativity, flexibility, and expression can come from the crowd, from a community, than from individual silos of creativity. Effectively, I’m very excited by the proposition of connecting creative people and seeing what comes out the other end.

Filmmaker: When you finally knew what the project would be, what were the logistics to put together the publicity and gather and sift through all the screenplays and films? How big was your response?

Jones: It worked in three specific stages: the script stage, the filmmaking stage, and then the final distribution and exploitation stage, which we’re currently really at the beginning of. The script stage began a year and a half ago when we launched the initiative. We had nearly 2,000 scripts submitted. We learned a lot in that process. We learned that often writers — and certainly the writers who submitted to 50 Kisses — could have taken greater risks. I think writers, or certainly again the writers who were involved in 50 Kisses, erred a little too close to the drama side of things. We could have done with more genre, more hard hitting, more narratives with teeth. That was one big observation that we had. We then took those 2,000 scripts and read them and sifted through them, which took a couple of months, until we had a short list of 50, which we then released onto the Internet. We had about 400 teams sign up to make a film, of which I think 127 actually got through to the very end and actually submitted a movie. Some of the most popular scripts were: NEIL, Enough, and The Moment. One of the most popular and produced scripts was also NEIL, written by Nigel Karikari. It was an android film, a bit like Blade Runner — a very straight drama version of that. It had eight films submitted. Another popular one, with seven films submitted, was called The Moment, which was about a hit man who is propositioned by his hit into a gay kiss, which the filmmakers responded to very positively. I think what we really learned was the filmmakers like genre, whereas the screenwriters leaned towards the drama. I’m not really sure drama is a genre. I think drama is something that is present in all strong narratives and is irrespective of genre.

The whole process took the best part of a year to pull together. Then we had to enter postproduction, which was very technically challenging because we were dealing with filmmakers who’d shot on all different formats at different frame rates and post produced on different platforms, so there was a significant lack of continuity. I think we really underestimated how long that would take us to get though. But we got through it, and we finished the movie and that’s what we premiered a couple of weeks ago.

Filmmaker: Speaking of all those formats, tell me more about postproduction.

Jones: We approached all the filmmakers who we’d shortlisted into the final movie and asked them for copies of their media, copies of their projects, exports of their projects. Every filmmaking team had a different conversation due to all their variations of formats, frame rate, and editing platforms, and that was a real challenge. Of course, we had to get drives mailed from the filmmakers all over the world, because we couldn’t email this material. It was even too large to use services like WeTransfer — we’re talking about incredibly large amounts of data. Especially when we wanted all the rushes, because often we’d like to go in and add a little bit more at the beginning or the end when the shot was too short, or we’d want to replace some shots in the middle of the film. So we did go through all the films and we did re-edit. In fact, every single film had some editorial changes made. Most–and I think this is the golden rule–most of them were shortened. And that’s one of the reasons why the final movie really clips along at some rate. Most people are genuinely surprised how fast it moves along.

Once we got through that we then mastered it. We cut it on Avid, and we mastered it to DNxHD 185 and did a .tiff stream export and a stereo .wav and we took it to Soho Digital Cinema, who very kindly made a DCP for us. We did do the final mix and the final grade in our office on the Avid, although the filmmakers had done much of the work in advance.

Jones: There was none! I mean zero, nothing, nada. There was no money. It was a film that came together simply because we could. And that’s not to say it didn’t have a cost. Of course there was a huge impact on our company because we had to manage the process, on our staff because they had to do the work, and it was a lot of legwork. But in terms of hard costs, really aside from buying a hard drive or three, there weren’t really any costs.

Filmmaker: Crowdsourcing a film’s content seems to work for certain types of projects, primarily those exquisite-corpse type films with multiple storylines and locations around the globe. Having now done one somewhat like this, do you see any other forms or avenues to making crowdsourced content more common?

Jones: You’re absolutely right; crowd-sourcing as opposed to crowd-funding is very much like herding more cats! It’s remarkably difficult to get people to do stuff, on time, on schedule, and to the specifications that you request. A handful of people did it, and did it with some panache. But I would say it was difficult to get both writers and filmmakers to deliver what they promised to deliver on time, and to engage with the process, to see it as part of a bigger piece instead of as a single individual artifact. To be fair to everyone involved, this was the first time we had done it as well, and we didn’t know what we didn’t know so there’s a huge amount of things that we would do differently next time. Mostly to do with process, procedure, and also being explicit about outcomes to avoid disappointment for anyone involved in the process, because we did have to modify the process as it grew.

There were just a bunch of things we just couldn’t see as we were going in. One of the obvious things was that we thought 50 two-page scripts would make 50 movies that were around two-ish minutes long. I kind of knew that actually they’d probably be longer than two minutes, but maybe two-and-a-half to three minutes. But what I wasn’t prepared for was eight-and-a-half minute versions of two-page scripts, so there was a problem there. Probably 90% of the films were over two minutes long. We never explicitly said in the rules that they had to be under two minutes, but we kind of made the assumption that people would be coming in at between two and three minutes and maybe we’d be able to do a bit of a re-cut to get it down to about two minutes and 15 seconds. That way we would end up with a 120-minute movie. So that was just one of the instances of things that we didn’t know we didn’t know.

Filmmaker: Do you think we’re going to see more of these projects?

Jones: Honestly I don’t know because they are massive feats of human engineering. I cannot [stress] just how much work was involved. At times I felt like I was a visual effects coordinator on some behemoth, but one without a staff or budget because it seemed to be all about just collating data and putting shot A into slot B. It was a real challenge. It’s an exciting proposition, and I’m sure other people will do exciting initiatives through the idea of crowd-sourcing movies, but I’m not sure they’re ever going to replace The Lord of the Rings.

Filmmaker: What about yourself? What are you working on next?

Jones: Right now we’re working on a feature narrative. Will there be another Create 50 project? I don’t know for sure. I suspect there will be, because on the whole the project was extraordinarily successful. It did exactly what we set out to do, which was it got screenwriters writing. Fifty new screenwriters got their work produced, and it got relationships built. There are at least ten new relationships that have gone on to develop features, some of which have gone into seeking finance and prep. I don’t know if we’ll have any 50 Kisses babies — I’d like to think we will. But the future is yet to be written, and it’s still very early days. Fingers crossed for the relationships that come out of 50 Kisses; I’m pretty sure we’ll do something in the 50 Kisses or the Create 50 realm in the future, but for certain right now we’re writing a genre movie. I don’t want to say what it is because I learned a long time ago there’s just no point until the whole thing is very real.