iOgrapher Adds Support and Mounts to iPhones and iPads 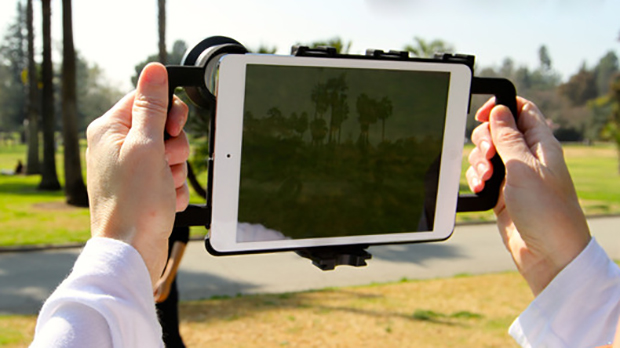 by Joey Daoud
in Cinematography, Filmmaking
on Apr 10, 2014

It’s becoming more and more common to do quick shoots with iPhones and iPads. They’re inexpensive, they have great cameras, they’re connected to the internet. But they obviously lack certain elements of even the most basic camera. When high school teacher David Basulto was using iPads in his media arts class he was noticing a common theme – shaky footage with poor audio. This led him to create iOgrapher.

iOgrapher is a simple plastic molding that now comes in three flavors – iPhone 5, iPad, and iPad Mini, with iPad Air on the way. The rig gives you two handles, three cold shoe mounts (two with the iPhone), standard tripod mounting thread, and a threaded lens opening for 37mm screw on lenses.

While very basic looking the two handles give a good amount of stabilization to the iOS device (and fortunately for the rest of the world the user is forced to shoot landscape). The three cold shoe mounts are more than enough for a light and microphone with room for an external recorder or handle.

An interesting use Basulto has found from users is adapting this as a GoPro rig with a large viewfinder. GoPro goes on one of the mounts, iOS device is connected via wifi to control and preview the GoPro footage.

While it’s not the same build quality as The Padcaster, another iPad rig, it’s about half the price plus has the two side handles for easy and stable handheld shooting. Both iPad cases run $65 ($50 for schools) and the iPhone case is $39.95. They come in a variety of colors.

Future plans for the iOgrapher is a metal lens mount for lenses from partners Basulto is working with (while still keeping the 37mm thread). Ultimately Basulto wants to create a heavy duty, completely enclosed waterproof case.

Case and accessories available at iOgrapher.com.

A free case was provided for review for this post.