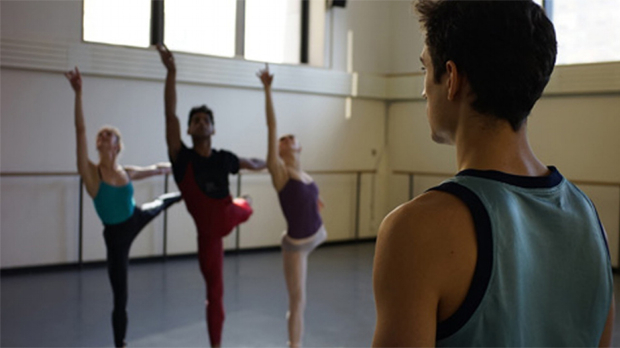 Making his name with Afterschool and Tiny Furniture, Jody Lee Lipes has quickly solidified his standing as one of the most impressive American cinematographers currently working. Alongside a diverse slate of DP work (he both shot and directed episodes of Girls and is currently working on Judd Apatow’s next feature Trainwreck), Lipes has also been establishing himself as a documentarian. 2009’s Brock Enright: Good Times Will Never Be The Same followed the title artist in the middle of a creative and personal breakdown/breakthrough; for 2010’s co-directed NY Export: Opus Jazz, Lipes staged a 1958 Jerome Robbins ballet on New York’s streets. Another kind of dance film, Ballet 422 reunites Lipes with Export executive producer Ellen Bar (who serves as New York City of Ballet’s Director of Media Projects) and dancer Tiler Peck. Stripping away personal drama and external concerns, Lipes hones in on company dancer Justin Peck as he makes the leap to choreographer, pulling together an original piece in two short months. Over the phone, Lipes talked about getting access for the film (which has another three screenings left), his lack of interest in ballet per se and working in the advertising world.

Filmmaker: You’ve said that you’re not interested in ballet per se, you just like observing the act of people working.

Lipes: Opus Jazz was a project that I did for hire. It was a film that I was brought on to do and I’m really glad that happened, but I don’t think that I jumped on board because it involved dancing and I love dancing. I definitely have an appreciation for it, but for me the creative interest in that project was really about Jerome Robbins, learning about him as a person and what his life and work were about, and the fact that he was such a perfectionist in trying to create something that he would not hate. I don’t think that he would ever like anything that anyone ever did without him, but I tried hard to do it justice.

I think in this case the film for me is more about a person making something. It’s not that important to me that it’s ballet. Opus Jazz is a very different movie: it has a script and it’s more like a narrative film than a documentary. That’s how it played in festivals. It’s very cinematic and shot on 35mm. Physicality and people doing things and being physical is important, because I think in vérité action needs to happen. It’s helpful that it’s an art form that is physical and unfolds in front of you instead of in someone’s mind. To me, I think the film is more about Justin and someone who’s in a position like Justin is in more than it is a film that’s specifically about ballet.

Filmmaker: I assume that your previous collaboration with Ellen Bar helped in getting the cooperation of the New York City Ballet?

Lipes: I co-directed NY Export: Opus Jazz, which Ellen produced, so I got to know some of the dancers and some of the people that work at New York City Ballet. In terms of the access and making that happen, that was definitely Ellen’s doing. She’s a person who knows both the dance world and the film world really well. Without her, this wouldn’t have happened.

Filmmaker: You split the camerawork with Nick Bentgen. Did you have guidelines and rules for the types of shots you would be using and stuff to stay away from?

Lipes: Nick is a director in his own right and also a DP. We’ve been working together for probably a decade, so the first thing is we know each other’s work really well and I really admire his work and his way of storytelling. He also made a really great vérité documentary called Northern Light. I had shot some footage already when Nick started with us. He just watched a bunch of dailies and did his homework. Also Nick has directed a lot of promotional stuff for New York City Ballet so he really knows that world too. He knows the dancers and he knows how to shoot dance probably better than most people in the world.

Filmmaker: At what point did you decide to leap from a short to a feature?

Lipes: When we were shooting, it crossed my mind a few times. When we brought an editor on board the first thing was to determine if my feeling about that was right or not. She put together an assembly of the material that was worthwhile and told the story chronologically to see how long it was and if that was enough for feature length.

Filmmaker: Have you considered completely separating your directorial and cinematographic work?

Lipes: It’s definitely something I would consider doing separately. Matthew Santo shot my episodes of Girls and Nick shot some of this. I think a lot of the time people think that when someone’s a DP it’s really hard for them to work with a DP. I think that’s a weird thing to think, because if you think about the relationship between actors and directors who are also actors, I think people usually think that’s an advantage. Being a DP just helps you communicate with the DP better.

I’ve been working on a screenplay for a while, and I’ve been shooting commercials for the last couple of years so there’s a lot of down time. I have the opportunity to choose my projects a little bit because I’m lucky enough to be working as a DP in the commercial world. I’ve gotten to work on a lot of projects on my own, like this one, without feeling like I’m going to starve to death.