Edge of Tomorrow: The Anxiety of Expendability 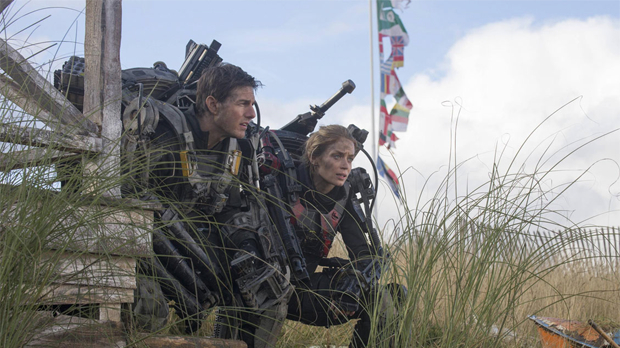 Despite perpetual predictions of the imminent end of Tom Cruise’s viability as a box office draw — a fate presumably tied to his Scientology, perceived egotism or the general difficulties of maintaining longterm A-list status — the actor keeps trucking along in vehicles that, consciously or not, tap into anxiety about how he’s perceived. There is, most notably, the precedent of Vanilla Sky, which seemed like a mid-life crisis writ large: a movie about a wealthy, successful man whose sudden downfall is precipitated by facial disfigurement — surely as much an actor’s nightmare as much as anything.

This type of fretting isn’t true of Cruise’s most consistent formula for success: despite the aspirantly pathos-laden introduction of two wives along the way, Mission: Impossible‘s Ethan Hunt is as blank a protagonist as has anchored a blockbuster franchise. Any stereotypical cockiness is a non-factor: Cruise is there to serve the needs of extensive, technically impressive action sequences, which means not much talking and lots of running. This is good business for everyone, and Cruise — also the bottom-line-oriented producer of these lavish vehicles — has no evident problem subsuming his own personality for the greater action good. But evidently this comes with some worry about his own importance: does it necessarily have to be him who does all the stunts?

In its broadest strokes, Edge of Tomorrow‘s premise is nearly identical to Oblivion‘s (extensive spoilers follow for both): after an alien invasion, Tom Cruise must help humanity push back and save the world. In Oblivion, it turns out that his character is one of an army of clones, making him infinitely interchangeable. Edge‘s big hook is that Cruise can never be killed: each time he dies, he starts the same two-day cycle over again, making him infinitely expendable. The Groundhog Day premise (Emily Blunt’s warrior shares first name Rita with Andie MacDowell’s character) requires unkillable Cruise to live the same 48 hours over and over again until he gets them right. This means mastering the physical part of his mission — shooting and evading aliens, killing the big bad, etc. — through mental study and conditioned muscle memory, but also necessitates explaining the exact same things to his fellow soldiers and combatants day in, day out: a wearying, exasperating requirement the movie conveys without itself being exhaustively redundant.

Learning by repetition has its exact analogue in the process of mastering a video game, but Cruise’s dilemma can also serve as a reflection of his work as a producer: supervising and carrying a massive production, a behind-the-scenes workhorse who’s not supposed to be more attention-getting on-screen than the expensive special effects around him. (One doesn’t have to have mounted an invasion or a film production to dig the sentiment; the simple mastery of an everyday work commute with ever-changing obstacle variables is a relatable enough similar situation.) The film’s Heathrow setting takes advantage of UK tax credits and is expediently pressed into service for clunky historical overtones: a beach invasion modeled D-Day, Emily Blunt’s “Angel of Verdun” nickname folding in an allusion to WWI.

Edge‘s premise’s black comic kick — having no choice but to save the world as the only way to end the death-rebirth cycle — has very little to do with its generic broader design. The big battle sequences and aliens lead to a climax oddly/exactly like Pacific Rim‘s, a descent into amniotic-ish fluid to detonate a bomb killing the monster that controls all the others. Up to that forgivably underwhelming finale, Edge neatly synthesizes Cruise’s ongoing fears of obsolescence and the fiscal pragmatics of its location into a witty story about the sheer tedium of self-improvement as a necessity for survival.